Smartwatches have been improving throughout the years. They now come in a wide selection of features to help you get fit, check your messages, and many more. It’s no wonder why distinctions between smartwatches for men and women have emerged — this is to ensure some minute features do cater to the specific gender needs. There are many smartwatches for men in the market and you would want to get the most bang for your buck when buying them.

In this article, we’ve compiled a list of the best smartwatch for men to look out for in 2022.

More than the name of the brand, the best smartwatch for men is usually defined by how design and functionality mesh to cater to the needs of everyday users. This usually covers smartwatch use for casual wear down to workout use. To give you a heads up, here’s a list of the impressive consumer smartwatch for men in 2022. 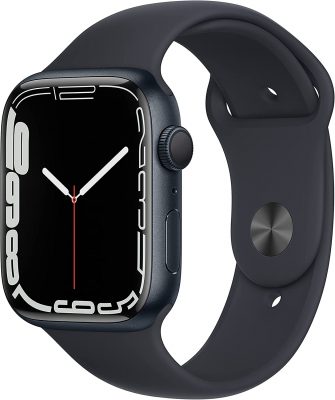 What we love about Apple products is that it is a product of innovation and every time an update becomes available, it only gets better. Apple believes in the power of being limitless and that is what the Apple Watch Series 7 brings to the table.

Over the years, the Apple Watch has become one of the most recognizable consumer products in the market. How can’t it be? If we consider the features the Apple Watch is stuffed with, the watch does mesh reality and technology. This effectively creates a revolutionary way to use a wearable. It’s no longer just a timepiece; it’s a piece of technology that allows you to track your fitness, send and read a message, play music, and check emails among others.

Additionally, the WatchOS brings new apps like the Noise app that measures sound exposure. These are welcome additions to a watch that is marketable not only as a wearable for both gender codes. Moreover, it’s the Apple Watch’s Always-On display that’s the most transformative feature. It allows you to see the time, workout stats, and other information at a glance. You’ll get the same experience out of it, but these updates will change your life. 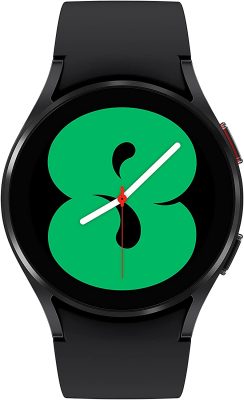 Almost capable of giving the Apple Watch a run for its money, the Samsung Galaxy Watch is another top-notch choice for a smartwatch for men. It might not have a rugged look, which might not appeal to the everyday average Joe, but the sophisticated sleek finish is just as appealing.

In terms of features, it does have the same offering as the Apple Watch. Users will have access to almost the same fitness tracker apps like Strava, change watch faces, and have the ability to fit your watch with the event you are attending by changing its bands.

Moreover, the Samsung Galaxy Watch 4 offers more functionality by way of adding apps — thanks to Google’s Wear OS technology which is responsible for the overall ecosystem of the watch. 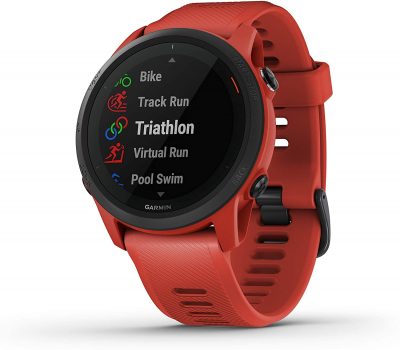 We have previously rated the Garmin Forerunner 745 smartwatch as the best watch for running because of its design and features. Considered as a multisports watch, the Forerunner 745 has Garmin’s Elevate heart rate sensor, as well as the Pulse Ox sensor that is capable of tracking the oxygen level in your blood. These features are what the Garmin smartwatch fleet is generally known for.

Additionally, its other features include the ability to store music in its local drive to enjoy offline streaming when running or cycling. The watch is also capable of reading and sending messages when paired to a user’s smartphone. Speaking of, the watch is compatible with either an Android or Apple smartphone.

However, the only drawback we have seen in this watch is that while a user would be notified of an incoming call, users won’t be able to answers calls directly from the watch.

Related: 8 Best Garmin Watches for Sports and Running in 2022 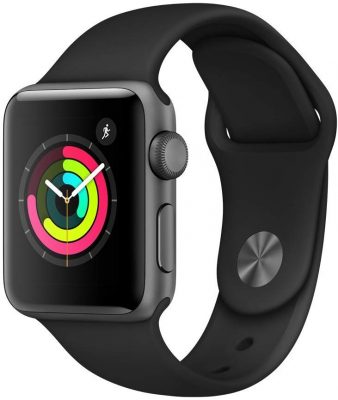 If you are looking into buying your first smartwatch, the Apple Watch Series 3 is a good consumer product to get. The Apple Watch is already the most popular smartwatch; the company isn’t trying to do anything new with Series 3. The biggest changes are an increased focus on fitness. And with built-in cellular connectivity, you can stay connected even without your phone.

Apple has added LTE capability and a faster processor into Series 3 without adding much bulk. The watch’s case is the same size as the Series 2, while the back’s extended a negligible 0.25mm. That’s two sheets of paper-thin, which is a pretty amazing thing for smartwatches. Pricing is still pretty high but more affordable than the Apple Watch Series 5. 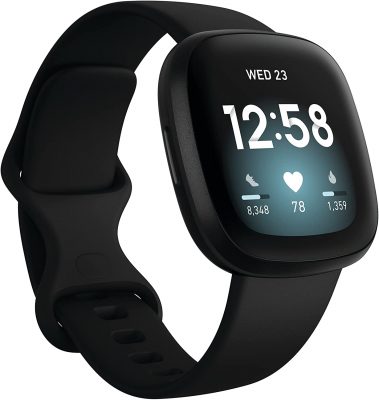 The Fitbit Versa 3 is the latest unit in the Fitbit Versa fleet. It’s an improved unit boasting a 1.58” AMOLED display that has an Always-On option. In terms of battery life, the everyday men can get the most out of this watch as it lasts for six days regular use and three days when used on a rather intense activity.

It isn’t on top of our list despite the advantages one can get out of the Fitbit Versa 3. That is because this watch does not go about without its own set of drawbacks. For one, it’s still heavily reliant on its companion app to perform some of its major functionalities. Additionally, there’s also the issue that Fitbit would require you to purchase a premium subscription in order to unlock its full capacity as a watch.

However, if you are looking beyond all the drawbacks and see Fitbit as a brand that delivers, then this unit is just what you are looking for. It does do well in terms of design, something the fashion-forward man would appreciate. 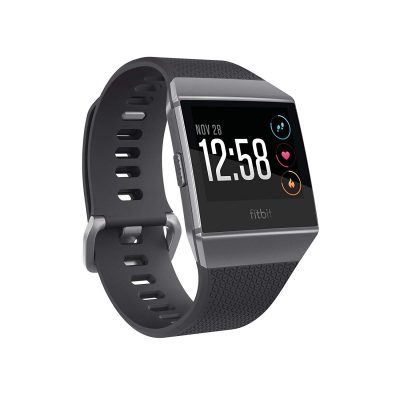 The Fitbit is famous for its fitness band and watch. Not to mention, the Fitbit Ionic is also a Fitness smartwatch. This Smartwatch has a sporty look with a lightweight aluminum body for about 30 grams. It has a wide range of colors with an LCD screen of about 1.42” inch with 384×2250-pixel resolution. The watch is protected by touchscreen gorilla glass with button aside operations.

Also, the Smartwatch is waterproof up to 50m. It has a multi-sports tracking functionality to track any sport with smart technology. Extra features include sleep monitoring, a breathing guide, and goal setting. It also comes with a health monitoring feature to keep track of your vitals. If you’re looking for a good Exercise Smartwatch, then this is for you. 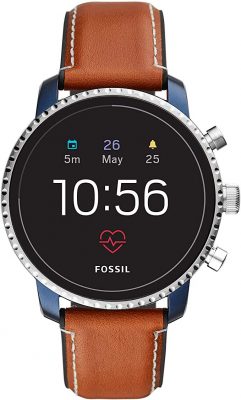 To the sophisticated and classic gentlemen, a wardrobe is never complete without a timepiece that could always pass for a casual and dress wristwatch. Fossil is known for producing this very kind of design and incorporating them in the watches the company puts out. It’s no wonder the same principle has been adopted when the company started producing smartwatches for men.

With a classic design that almost fits formal attire, the Fossil Men’s Gen 4’ blends the classic and the modern. It still looks like a Smartwatch, but it has the classic aesthetics as well, allowing it to fit in every occasion. A feature of this smartwatch for men is its good interface customization, allowing you to adjust the dials to your taste. You can even use pictures from social media as a screensaver. 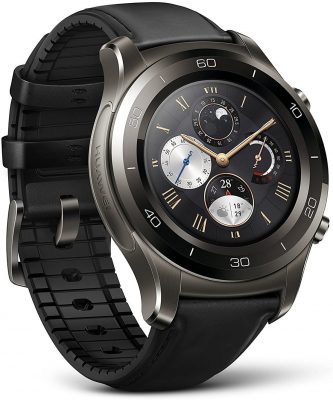 The Huawei Watch 2 appearance has a sporty look. The AMOLED display has Gorilla Glass, making it tougher. The watch is running on Android Wear 2.0 and also supports the calling feature. That means you can answer phone calls through the watch itself. It’s also featured with Google Assistant. So, all functions performed by the TicWatch are also available in Huawei Watch 2.

You can switch between apps using the sporty rounded dial. The built-in GPS and fitness app is always keeping track of your health and saving all data in the app. It has a long-lasting battery and removable straps with different color options. Note that while it’s water-resistant, it is not waterproof.

Now, there are things you need to take into consideration before actually purchasing one. Some very important things, to say the least. Smartwatches can do many things; they work best in conjunction with smartphones. Usually, smartphones match the brand of the smartwatch. So iPhones with Apple smartwatches, Android smartwatches to Android phones, etc.

Another concern is what apps you wish to get there. You don’t want to get redundant and add a calculator when you already have one on your phone. Add an Uber to call for a cab, or an exercise app marking how much you ran. There are a lot of possible apps compatible with smartwatches right now so take your time picking.