There are numerous options these days when it comes to high-quality headphones. Some prefer the AirPods Max for great Apple compatibility, while others prefer the Sony WH-1000XM4 or Bose 700. However, while Apple’s headphones are the clear option if Apple device compatibility is your main concern, the latter two products are certainly harder to choose from. In the battle between the Sony WH-1000XM4 vs Bose 700, which would win? If you’re curious and are debating between getting either of these, then read on to find out more. 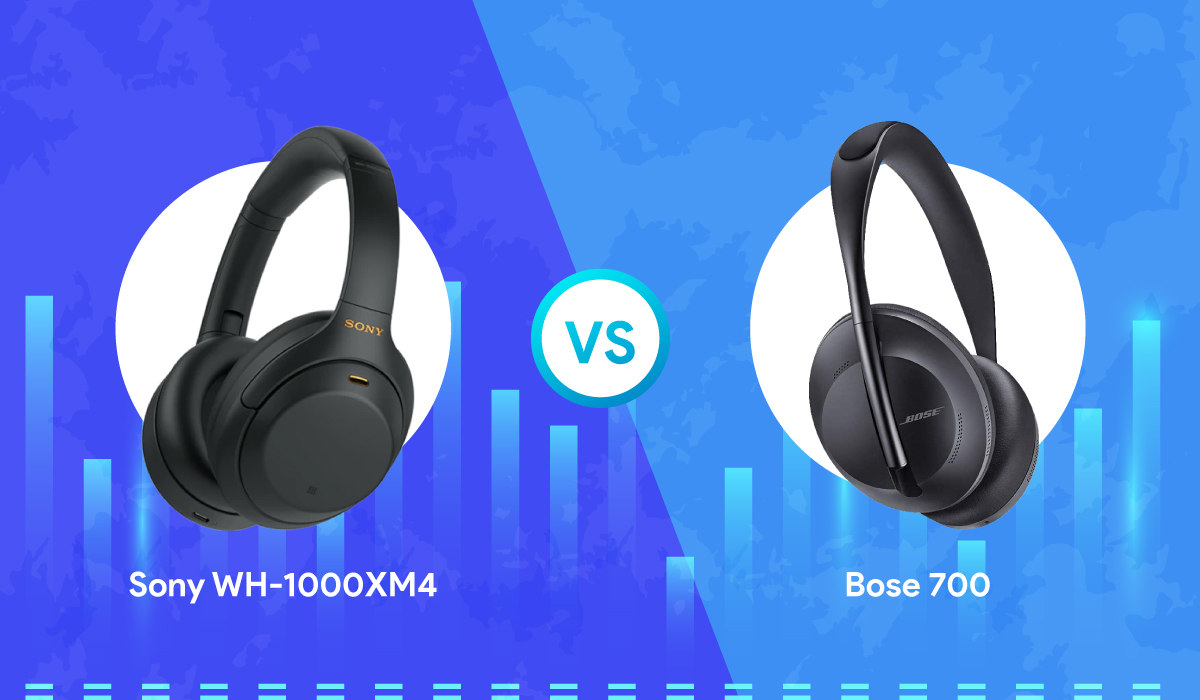 The Sony WH-1000XM4 is an industry-leading pair of headphones that’s portable, sleek, and highly functional all in one package. The headphones also provide some of the best-in-class audio and call quality in the industry. Overall, it delivers great comfort and premium features that outclasses many of its rivals.

The Bose 700 is a noise-canceling leader in the headphone industry. It provides many of the best features you’d find in premium headphones like high-fidelity audio and accurate voice pickup. Overall, it’s one of the best choices if you value a high-quality listening and talking experience.

Choosing between the Sony WH-1000XM4 vs Bose 700 will prove to be fairly difficult for most people. That’s why we’re comparing the two based on different metrics such as design, sound quality, and noise cancellation.

We’ll compare the two in each category and pick a winner. Finally, we’ll decide on an overall winner at the end of the comparison to help you decide. Without further delay, let’s begin.

After comparing Sony WH-1000XM4 vs Bose 700, we can say that both headphones are well-designed and were built to last. However, while they are both sturdy, they do differ in key elements. Let’s talk about the Bose 700 first.

The Bose features a cleaner design with a matte coating on the ear cups and an adjustable headband. The ear cups are snug, allowing for great isolation that cuts out ambient noise. However, the earcups don’t fold so these headphones aren’t as portable as Sony’s product.

In addition, the Bose 700’s padding does put some pressure on your head. As a result, it may not be as comfortable to wear continuously for long durations.

As for the Sony XM4 full-size headphones, you get much of the same design as the previous generation XM3. It features folding earcups, making it great for portability. You can easily substitute these for any of your wireless earbuds if you value better noise cancellation on trips.

Apart from this, these over-ear headphones have less padding than the previous generation. This may reduce the weight of the overall product but it does add more pressure on your head. However, the added pressure isn’t that prominent, so it’s not completely uncomfortable to wear for long periods.

Both headphones feature polished designs aesthetically speaking. The XM4 is more elegant overall. Moreover, its copper accents add a touch of class to the design.

Meanwhile, the Bose 700 is more contemporary in its design language compared to Sony’s headphones. However, both designs are beautiful so it will come down to your preference.

Sound Quality: One Is Neutral, One Is Detailed

When it comes to sound quality, it’s a close battle between the Bose headphones 700 vs Sony WH-1000XM4. After all, both products are top-of-the-line offerings from either brand. Hence, they’ll feature the best of what both brands can engineer.

Unfortunately, Bose does fall short in a few categories. For one, while the audio sounds balanced, it’s not as punchy with the bass as Sony. Depending on your preference, the Bose can come across as underwhelming at times.

On the other hand, Sony’s headphones sound much less neutral than the Bose 700. They also underemphasize sounds at the 1000Hz mark, so harmonies and subtle instruments aren’t as noticeable. Moreover, some higher frequencies do sound slightly off.

Nonetheless, Sony’s headphones offer a great listening experience. You won’t notice these shortcomings while listening at 30Hz and most songs probably won’t be that extreme, anyway. Overall, it sounds vivid and detailed and doesn’t have many distortions.

Sony’s flaws shouldn’t bother you as much during regular listening. It will deliver more power than the Bose, which we appreciate. In addition, Sony’s app offers more EQ adjustment options than Bose’s Music app. Hence, you can fine-tune its sound to your preferences more accurately.

Finally, the XM4’s 360 Reality Audio platform can give it a huge lead over the Bose 700. It truly provides high-resolution streaming with apps like Tidal and Deezer. However, the platform does require a membership once you’ve exhausted the free trial.

Between the Sony WH-1000XM4 vs Bose 700, the latter is the clear winner when it comes to calling quality. That’s because the Bose features an adaptive eight-microphone structure. This system allows it to clearly reproduce your voice so the other person can understand.

Meanwhile, the XM4 also performs well in terms of call quality. However, its microphone isn’t as smooth as the Bose. The person on the line will still hear you well. Nonetheless, it won’t be as clear as if you were using the Bose 700.

On the other hand, both headphones do have one big flaw in their microphones. This is because both Sony and Bose drop off your voice significantly at the 200Hz mark. Thus, while nearby bass tones will be drowned out by the microphone, people with deeper voices might not sound good. They won’t be as clear or present in the call on either device.

Even though the Bose 700’s full name includes “noise-canceling” in the title, it loses in the battle regarding noise cancellation. That’s because Sony provides better active noise cancellation overall. It can cancel out mid to low frequencies much better between 60 to 2,000Hz.

As a result, you’re less likely to hear lower-frequency sounds like engines or air conditioners during use. Of course, low-frequency sounds might not be as bothersome to most people as high-frequency ones. Nonetheless, this does give Sony an edge in this fight between the Sony WH-1000XM4 vs Bose 700.

Apart from this, both headphones do perform well enough on every other frequency. That’s especially true since Bose updated the Bose 700’s firmware lately, making the ANC much more effective. However, both Sony and Bose can effectively reduce ambient noise so you won’t hear the environment while you’re focused.

Brands tend to inflate the longevity of their product’s battery life in promotions. Hence, you can’t rely on the 30-hour or 20-hour ratings both Sony and Bose provide. You’ll need to test it for yourself.

Of course, you may extend the battery life on both by limiting or disabling certain features. Nonetheless, Bose 700 wins vs WH-1000XM4 in this round.

On the other hand, both devices offer USB-C charging to replenish the battery. The Sony does offer quick charging, so you can get five hours of playback after a 10-minute charge. Bose also offers fast charging, but it can only give two hours of playback after a 15-minute charge. With that said, while Sony doesn’t last as long, it can get back up more quickly than the Bose.

Sony’s headphones feature an all-touch-based system when it comes to controls. The right ear cup controls the volume and playback while the left handles the voice assistant or ambient sound. However, while gestures may be convenient, Sony sometimes fails to register certain taps during use.

Meanwhile, Bose is a lot more consistent when it comes to registering gestures. It doesn’t fail to detect swipes or taps, making it superior to Sony. Moreover, it has physical controls for certain actions like pairing, noise cancellation, and voice assistant access. These make it less prone to misreading or failing to register swipes. Hence, the latter wins when we’re comparing the Sony WH-1000XM4 vs Bose 700 in terms of controls. 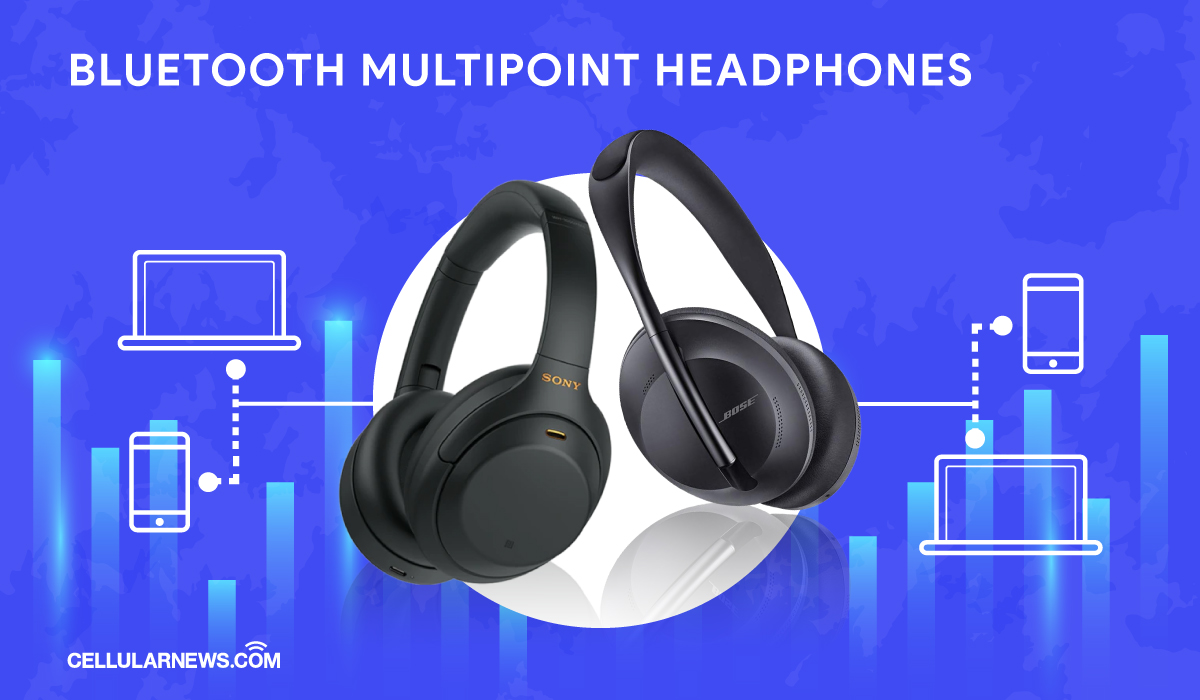 The former has a slight edge over the latter if we’re comparing connectivity between the Sony WH-1000XM4 vs Bose 700. That’s because Sony supports more Bluetooth codecs than Bose, supporting SBC, AAC, and LDAC. Moreover, LDAC — the codec that Bose doesn’t have — provides the highest-quality experience when it comes to Bluetooth streaming.

With that said, both are compatible with iOS and Android. However, Bose might be limited on Android phones because the AAC codec isn’t as compatible with Android devices. You can still use SBC, but it’s not great for high-quality audio.

Apart from this, both options are competent when it comes to general streaming and multitasking. That’s because both are multipoint Bluetooth listening devices, allowing you to switch between two simultaneously connected computers or phones.

Finally, the Bose features a 2.5mm headphone jack while the Sony has a 3.5mm port. You should keep this in mind when deciding between the two. That’s especially true if you value wired connections.

When comparing the Sony WH-1000XM4 vs Bose 700, the latter wins when it comes to price. That’s because it’s much cheaper and costs only $270 on Bose’s website. Looking through Amazon, you can find used pairs for slightly higher at less than $310.

Meanwhile, the Sony WH-1000XM4 is much more expensive and costs almost $350 on Amazon. Moreover, the price remains the same even on the Sony website. Hence, the Bose is the better deal if you want more value for your money and you’re on a budget.

Finally, let’s compare the warranty between the Sony WH-1000XM4 vs Bose 700. The former has a 1-year limited warranty for buyers within the US and Canada. Hence, you can take it back to the manufacturer if you notice factory defects. Sony can then repair it with new or refurbished parts or replace the unit entirely.

Meanwhile, the warranty is roughly the same for the Bose 700 headphones. You get a one-year limited warranty for repair using new or refurbished parts. Moreover, Bose can replace the product altogether if it finds it irreparable. However, Bose can also provide a refund, whether in part or in full, for the product within 90 days.

Meanwhile, Sony’s headphones cannot be refunded according to their limited warranty. However, you might be able to do so depending on the retailer you bought the headphones from. For example, Amazon has a 30-day delivery policy that allows returns within 30 days after delivery. That period extends a few more months as well during this year’s holiday season.

Between the Sony WH-1000XM4 vs Bose 700, we recommend the former if sound quality and noise cancellation are your priority. It’s certainly the better choice for a high-quality music listening experience and better Bluetooth compatibility. The device is also more comfortable and portable.

However, Bose does win by a small margin in this comparison. That’s because Sony’s headphones are more expensive. Moreover, the Bose wins when it comes to calling quality, convenience, controls, and battery life. Although it loses against Sony in terms of audio quality, the difference may not be that noticeable.