If you’re running out of internal storage on your mobile phone, you should consider investing in the best microSD card available. It’s one of the easiest alternatives to expanding your storage needs. Although high-end phones are already ditching memory card slots, most budget phones still come with an expandable memory as they lack ample storage.

The best microSD card for your mobile phone allows you to conveniently back up your phone data such as music, files, and other essentials. You can also quickly move apps from Android to an SD card if your internal memory is running out of space. With the best microSD card, you don’t need to connect to a Wi-Fi network or mobile data just to upload a backup.

Picking the best memory card for your phone is not as easy as you think. You have to consider the read and write speed, the storage capacity, and the speed classes. In this article, we’ll simplify everything to plain English and pick the best microSD cards for you. 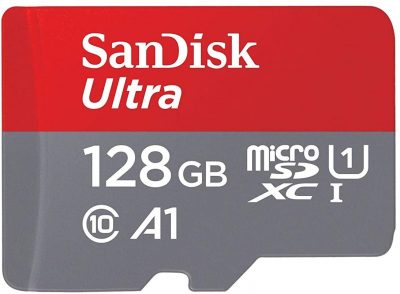 While it can read data with a 100 MB/s capacity, the SanDisk Ultra’s write speeds have slower performance. Thus, it’s not the best microSD card for 4K video recording.

The SanDisk Ultra package comes with an SD adapter. 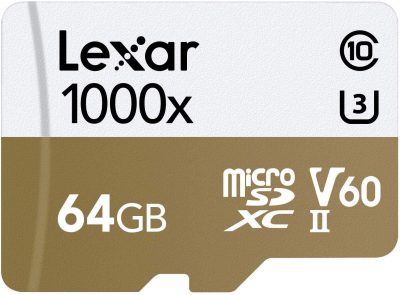 While it doesn’t have impressive write speeds, it supports 4K video recording. It’s one of the best microSD cards with numerous positive reviews on Amazon.

A Lexar Professional 1000x package includes a USB card reader to connect to your desktop or laptop. 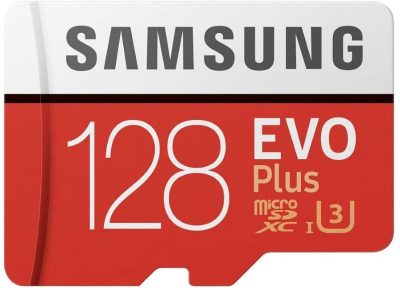 Samsung Evo Plus is an SDXC card with a Class 10 speed type or UHS-I rating. It supports transfer speeds to a maximum of 80 MB/s and has garnered a lot of positive feedback on Amazon. Hence, it gains a spot on the list of the best microSD cards for Android devices.

Regardless of whether you’re using a smartphone or tablet, Samsung Evo Plus provides efficient and fast performance. It’s highly compatible with 1080p video recording. However, if you’re fond of shooting in 4K, then you can choose other alternatives on this list.

For its reasonable price, it’s one of the best microSD cards as an all-rounder for your storage needs. 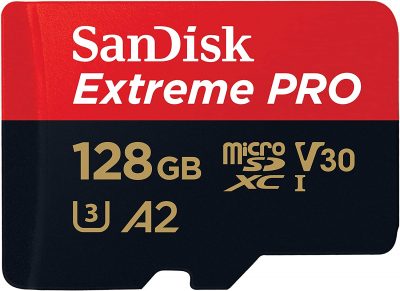 SanDisk Extreme is one of the fastest SDHC cards for your Android smartphone. It features read speeds of a maximum of 90 MB/s as well as write speeds of up to 60 MB/s. It is a great choice as the best microSD card with a lifetime warranty inclusion. Also, SanDisk Extreme supports both 4K and 1080p video recordings.

If you’re primarily buying for video recording, then you can choose the bigger storage capacity of this microSD card. It classifies as V30, UHS 3, and Class 10. Like other microSD cards, SanDisk Extreme includes a handy SD adapter in its package. 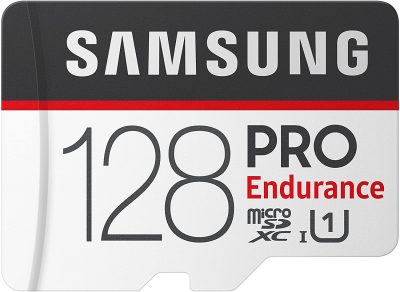 Aside from smartphones, you can also purchase this microSD card for your CCTVs and dash cams on your vehicles. The Samsung PRO Endurance is primarily built for constant video recording and re-recording. In terms of storage capacity, it is available in 32 GB to 128 GB capacity. 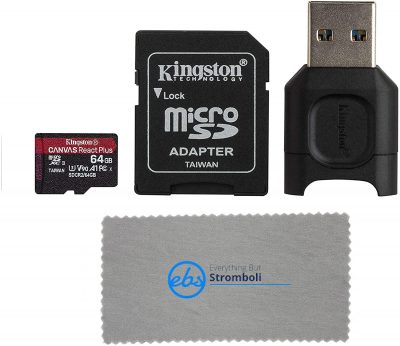 Kingston Canvas React Plus is one of the best microSD cards under Kingston’s Canvas series. With a Class 10 and UHS-I microSD card classification, it is well for high-performance and 4K and 8K Ultra-HD high-speed video recording and high-resolution pictures.

It’s also an excellent microSD card for handling numerous mobile applications, compatible with almost all types of apps. In terms of storage capacity, you can purchase Kingston Canvas React Plus ranging between 16 GB and 512 GB capacity. 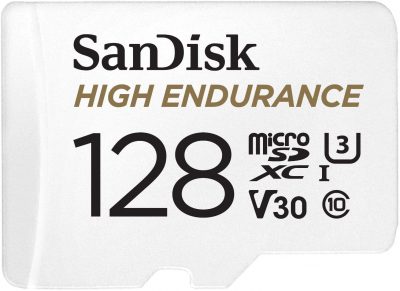 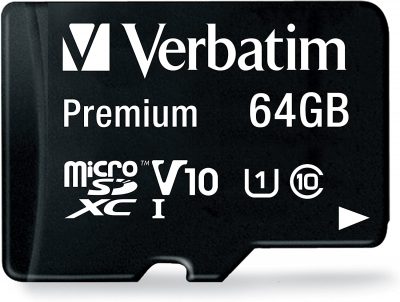 Verbatim Premium is one of the best microSD cards for Android that supports read/write speeds of up to 80 MB/s. It has a classification of V10 video speed capacity.

The Verbatim Premium has a durable performance, withstanding different elements. Thus, this microSD card is temperature and shock-proof as well as water-resistant.

The Silicon Power features read speeds of up to 80 MB/s. Also, its storage capacity is excellent for about 20 hours of 720p high-definition video recording. For its price, it’s one of the best microSD cards for a heavy Android smartphone user who wants to add storage space without any advanced features.

Aside from Android devices, Silicon Power is also best for gaming consoles such as the Nintendo Switch. 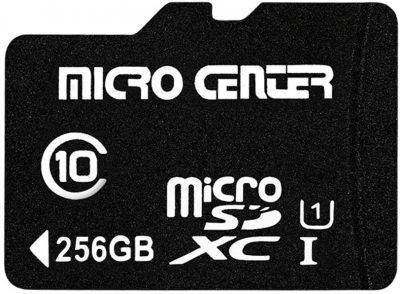 Another best-value microSD card on this list is Micro Center. It’s an excellent option with Class 10 speeds and 64 GB storage capacity. The Micro Center SDXC is reliable enough to store approximately 24,000 regular-sized images or seven hours’ worth of 1080p video recording.

As a cold- and heat-resistant and waterproof microSD card, the Micro Center is an ideal option for frequent travelers. Due to its capacity to withstand extreme temperatures, you can capture photos and videos even in hot deserts with no troubles. 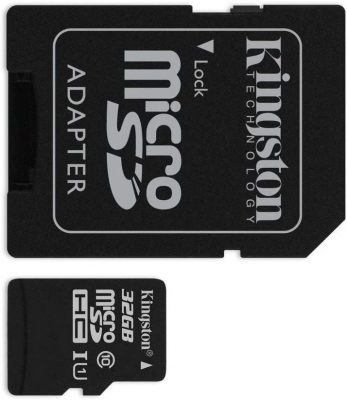 Like the Gigastone MicroSD card, Kingston Canvas Select is a hobbyist’s option. It features 32 GB storage capacity and write speeds of 10 MB/s. This microSD card is also a suitable option for surfers and divers due to its IEC/EN IPX7 certification.

Given a Class 10 rating, the Kingston Canvas Select is compatible with standard video recording only. Hence, it’s not the best option for 4K video recording and more intensive applications. 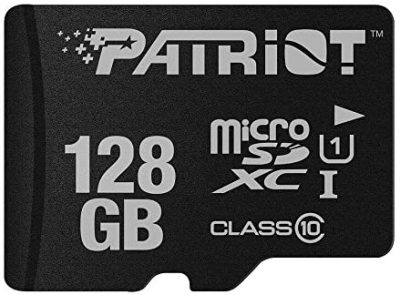 It’s also perfect for shooting full high-definition videos for videographers and photographers. Aside from Android smartphones, the Patriot LX Series is an excellent extra storage device for gaming consoles such as the Nintendo Switch. 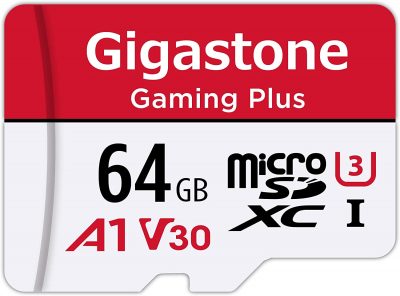 Gigastone is one of the best microSD cards for beginners, hobbyist videographers, and photographers. It features a 32 GB storage capacity and read and write speeds of up to 90 MB/s and 20 MB/s, respectively.

For professionals, there may be other microSD cards that best fit your preferences and needs. 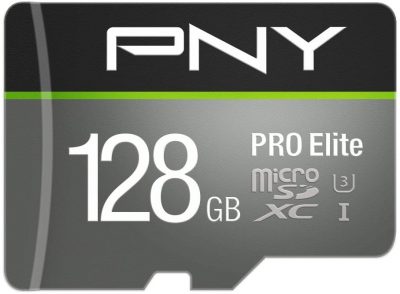 Are you a pro videographer or vlogger? If yes, then the PNY Pro Elite is one of the best microSD cards for excellent 4K video recording and storing app data. This microSD card features read and write speeds of more than 90 MB/s. Also, it is available in 32 GB to 512 GB storage capacity.

The PNY Pro Elite isn’t only the best microSD card for Android smartphones, but it’s also compatible with GoPro cameras. If you’re shooting with both devices, then PNY Pro Elite is an all-rounder for you.

How Does a MicroSD Card Work?

The “SD” in microSD is a shortened form of “secure digital.” MicroSD cards are popular for Android smartphones and are smaller than the standard SD cards. They have almost the same size as your fingernail. Hence, it’s called a microSD.

All types of data integrated into the SD card are saved in a digital format. Within the microSD card’s plastic case, you can find a robust chip that contains several electrical circuits. When the card isn’t in use, the electrical circuits preserve its charges without any extra power or charge.

When the microSD card is inserted into an active Android smartphone, a small electrical charge from the phone transports electrons to the memory chip. The digital patterns saved on the flash memory chip are associated with the data saved on itself. Data is removed when a significant amount of voltage is applied to the electrical circuit. Thus, through this process, rewriting data is possible.

There is a diverse range of microSD cards available on the market. However, not all of them will work on all smartphones or tablets. When it comes to choosing the best microSD card for your Android device, you have to look at the storage capacity and speed.

How to Choose the Best MicroSD Card for Mobile Phones?

Once you select a microSD card capacity, then it’s time to decide based on the speed. The speed type of your microSD card identifies how quickly it can write or transfer data. When you’re working with images and videos, the faster, the better.

The majority of newer Android smartphones support three major speed classes; namely, UHS-1 Class 3, UHS-1 Class 1, and Class 10. UHS is an abbreviation for Ultra High Speed, and it has two bus types indicated either I and II. These types are essential in identifying the microSD card’s maximum speed. UHS-2 microSD cards feature an additional row of pins and are currently being developed. However, limited smartphones and tablets support them.

Although the maximum speed for each microSD card is rarely indicated on the packaging, here is a summary of the speed classes and corresponding minimum speed:

The majority of microSD cards are way faster than the expected minimum speed. For instance, a Class 10 microSD card can reach 95 MB/s.

Finding the best microSD card for your Android smartphone doesn’t have to be complicated. While it requires a little work when it comes to options, microSD cards help expand your storage needs. After all, having a full memory for storing memorable travel photos can be a frustrating experience.

So hopefully, we’ve provided you with all there is to know regarding microSD cards so you can choose the best one for your preference and needs.