There are quite a few MagSafe chargers for iPhone 13 available on the market right now, but which ones are worth it? First introduced with the iPhone 12, Apple’s magnetic charger or MagSafe is a marked improvement to older wireless charging methods like Qi charging. MagSafe allows faster wireless charging of up to 15W for iPhones, which is half as much as the 7.5W t0 10W speed of common wireless chargers right now.

Apple produces the original MagSafe chargers, but because of their popularity, a lot of companies have also started to produce MagSafe-compatible products. In this article, we list down the best MagSafe chargers for iPhone 13.

While we have an entire article dedicated to explaining what MagSafe is, here is a quick lowdown on what it is and why it is the best kind of wireless charging you can get for an iPhone 13.

As we said earlier, MagSafe was first introduced in the iPhone 12 fleet. This piece of tech superseded the older and clunkier Qi chargers with more accurate and powerful charging. MagSafe-equipped devices have integrated magnets that align and position your devices for an optimal charge. This keeps the directed wireless charger and iPhone power receiver in line for the duration of your charge. Positioning is not the biggest improvement of MagSafe chargers, though, as Apple managed to make them give iPhones 15W of power compared to just 7.5W – double what Qi chargers could provide.

Third-party accessories for Apple devices need to have Made for iPhone (MFI) certification. This certification assures that a product isn’t just compatible, and your MagSafe charger for iPhone 13 can actually put out the full 15W of power they should. Licensed MFI devices have also passed Apple’s rigorous tests by having built-in magnetometers and compasses for added interference protection and an NFC antenna to allow your iPhone to recognize the device as an MFI product.

Now that we have explained what MagSafe is and how it works, here is our list of the best MagSafe chargers for iPhone 13! We have split this list into two parts. One part is focused entirely on true MagSafe and MFI-certified chargers to ensure that your iPhone 13 can get the most of its 15W power supply. This 15W maximum input applies to iPhone 12 and 13 series, excluding their Mini versions — they can only get up to 12W wireless charging. Do note that to get the most out of these MagSafe chargers for iPhone 13, you must have a wall charger that puts out at least 20W connected to it.

The second part, meanwhile, is for MagSafe-compatible chargers and charging stands. These stands and chargers only give 7.5W of power to your iPhone 13 due to lacking the MFI certification and NFC chip. That said, they are still high-quality products from great brands and should be worth every penny. We have added some important information for each charger, like its brand, its charger type, and a short introduction to why we chose that specific charger.

Related: What To Do When iPad Is Not Charging? 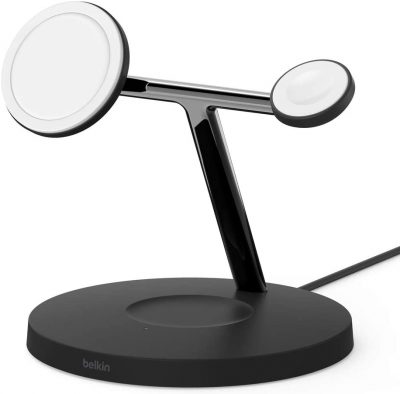 Our premium pick for this list is for loyal Apple users who are looking for a charger for multiple devices. Belkin’s Boost Up Charge MagSafe is a 3-in-1 charging device that lets you charge your iPhone 13 alongside your AirPods and Apple Watch all at the same time.

A premiere true MagSafe charger, the Boost Up Charge can supply the full 15W of power even with the watch and earbuds charging at the same time! Due to its strong MagSafe locks, you can also use the stand as a normal iPhone 13 stand for video calls and conferences as it charges. Best of all, Belkin also added a compatible wall charger and a 1.2m cable to power their charger stand.

Because of its capabilities and accessories, we also chose the Belkin Boost Up Charge Pro MagSafe as part of our list of the best wireless iPhone and Android chargers.

Mophie 3-in-1 Travel Charger with MagSafe 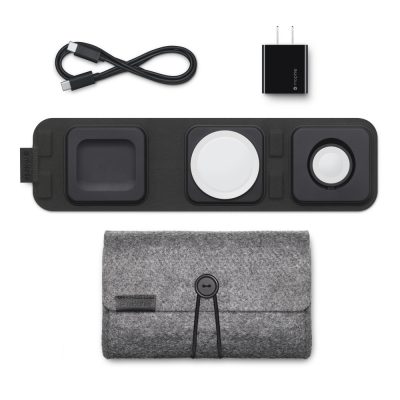 An Apple online store exclusive, Mophie’s 3-in-1 Travel Charger with MagSafe does exactly the same things as our premium pick does. While costing nearly the same as Belkin’s Boost Up Charge MagSafe 3-in-1 Wireless Charger Stand, Mophie’s 3-in-1 comes in a neat and easy-to-carry travel case! On-the-go charging of your iPhone 13, Apple Watch, and AirPods has never been easier. All you need to do is find a table, unfold the Mophie pad, plug in the included wall adapter, and you can charge your devices! 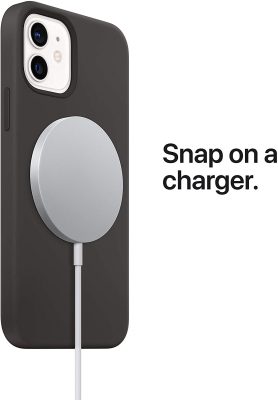 Our pick for the best value MagSafe charger for iPhone 13 is, of course, Apple’s own MagSafe charger. Nothing beats an Apple charger in terms of design simplicity and its compatibility with other Apple devices. Aside from its simple design, this charger is easy to use because all you would need to do for this charger is plug it in, slap it on your phone, and you are good to go.

Take note that this doesn’t come with a wall power adapter out of the box. You have to buy it separately.

Belkin’s Boost Up Charge MagSafe 3-in-1 Wireless Charging Pad is their take on a wireless charging pad design. With the same ideas and specs as their Boost Up Charge MagSafe 3-in-1 Wireless Charger Stand, the main difference between the two is how flat this pad is. While quite short, this pad’s design reminds us more of old-school iPhone docks instead of a lightweight pad.

Since it is still able to charge an iPhone 13, Apple Watch, and a pair of AirPods at the same time, this charging pad’s main rival would be Mophie’s similar travel charger. Basically, if you were to choose between the Boost Up Charge MagSafe 3-in-1 Wireless Charging Pad or Morphie’s 3-in-1 Travel Charger, we suggest getting the travel charger if you are always on the go. 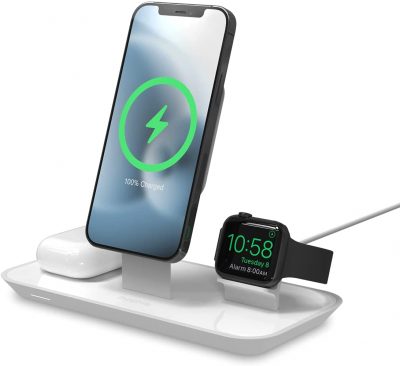 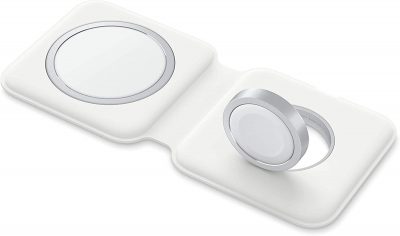 Apple’s MagSafe Duo Charger is light, sleek, and most of all, compact. Designed as a MagSafe charger for iPhone 13 models and Apple Watches, it has two (hence the Duo in its name) MagSafe chargers. Of the two, the larger of the two charging disk pads is meant for the iPhone. Aside from this, the Duo Charger is also meant to be “travel-sized” and can easily be carried in a purse or bag. For its price, however, it does not have an included wall adapter and instead only has a charging cable. If you are looking at the Apple MagSafe Duo Charger, we suggest going for the Mophie 3-in-1 Travel Charger instead. 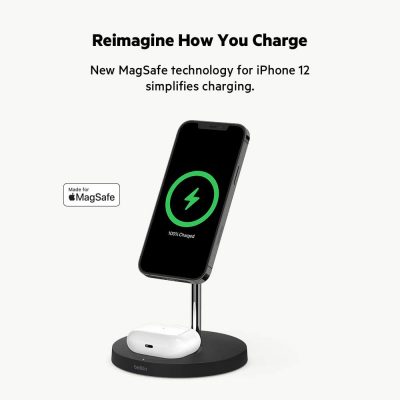 The 2-in-1 version in Belkin’s Boost Up Charge MagSafe Charger Stand line is meant to charge an iPhone 13 and AirPods at the same time. There is not much to say about this that we have not said about the 3-in-1 version, as it uses the same half-ball charger design that can rotate and move around. Its base, meanwhile, is the same one used by the 3-in-1 version and has a small indentation for the AirPod case to fit in. 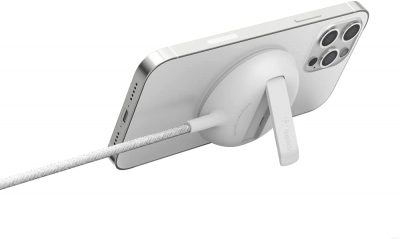 Belkin’s version of Apple’s basic MagSafe charging disk is the Belkin MagSafe Wireless Charger. This charger is superior to Apple’s device due to two things. The first is the simple design decision to have an integrated plastic flap to serve as a kickstand while charging your phone. Its second difference, though, is its added accessories as it has a 6.6ft long charging cable right out of the box.

This second part of the list is all about MagSafe-compatible chargers for iPhone 13 models. Do remember that these chargers are not MFI-certified and are limited to outputting just 7.5W of power when charging your iPhone. If you want a faster charge but do not want or cannot get a MagSafe charger, you may want to get a wired fast charger instead.

Related: Why Does Not Your iPhone Charge When Plugged In

Otterbox 3-in-1 Charger for MagSafe 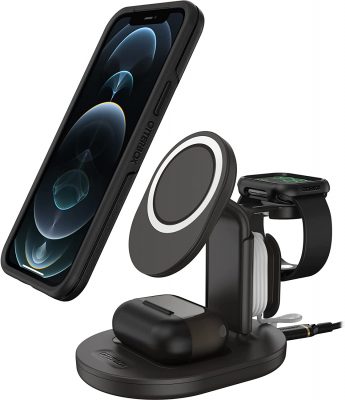 Although more well known for their hardy phone cases, Otterbox also has a full line of phone chargers and accessories. Their 3-in-1 Charger for MagSafe is part of this line and is meant to charge an iPhone 13, Apple Watch, and AirPods at the same time. While it may only charge your devices with 7.5W of power, this 3-in-1 charger is a lot more compact than its other competitors and just a little under 7 inches tall and 4 inches wide. 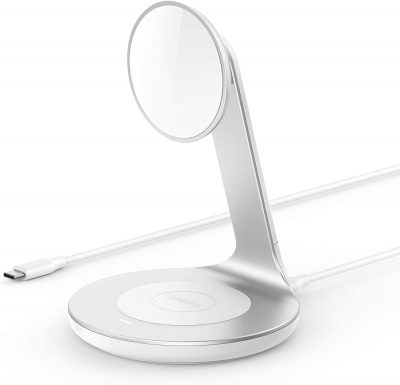 A good choice for a 2-in-1 iPhone 13 wireless charger, Anker’s PowerWave 2-in-1 is a MagSafe-compatible device meant to charge a pair of AirPods and an iPhone 13 at the same time. The Powerwave has a few things going for it, like the ability to move the iPhone dock by up to 30 degrees for better viewing, and its less than $50 price tag. If you need a MagSafe charger for iPhone 13 and don’t mind charging with just 7.5W, the PowerWave is worth a good look. 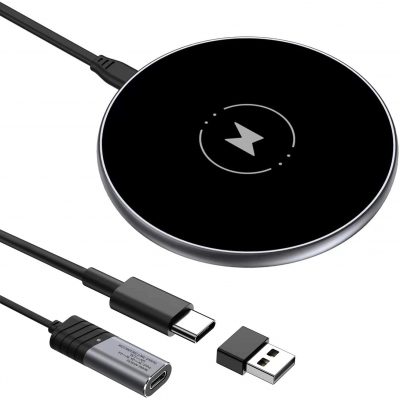 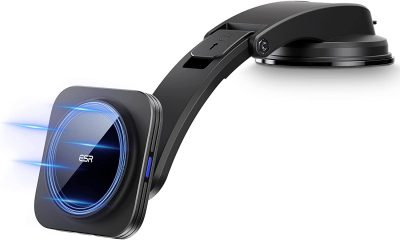 The last entry in this list of MagSafe chargers for iPhone 13 is ESR’s HaloLock Dashboard Magnetic Wireless Car Charger. Quite obviously, this charger is meant to be used in your car and comes with a lockable suction cup for dashboard mounting. Aside from that, it also has a curved boom arm to better meld with your dashboard and gives you a better reach for your charging iPhone.

MagSafe chargers have specialized hardware that makes charging your iPhone 13 faster. They are perfect if you need a quick tap-up or if you don’t want to wait that long to use your phone again. Their prices may seem overwhelming, but it doesn’t mean that you can’t secure a good deal.

If you are loyal to the Apple ecosystem, getting the 3-in-1 or 2-in-1 MagSafe chargers from Mophie or Belkin will give you more value. Aside from having a dedicated charging pad for iPhone and AirPods or Apple Watch, they also provide a complete package that includes an AC wall power adapter and a cable. If you only have an iPhone 13, then we suggest sticking with the single MagSafe charging pad that Apple sells.