It seems like only yesterday when Magnavox released Odyssey, the very first commercial home video game console introduced in 1972. Fast forward to 2020, people are no longer glued to their living rooms while holding joysticks. Instead, gamers are now using their mobile phones or, better yet, gaming tablets.

With its portability and convenience, tablets have now become a gamer’s weapon over the last couple of years. For quite some time, Samsung’s Galaxy Tab has struggled for relevance, mainly due to Apple’s iPad which proves to be the top-notch choice for most consumers.

A tablet’s versatility, style, and cost are some of the factors which made it an in-demand new category of electronics. In this article, we have cherry-picked the best gaming tablets in the market today, including Apple’s iPad, Samsung’s Galaxy Tab, and their runners-up.

The best gaming tablets of today are not entirely distinct from one another. All of them have a few standout features which make them optimal for both gamers and typical tablet users. 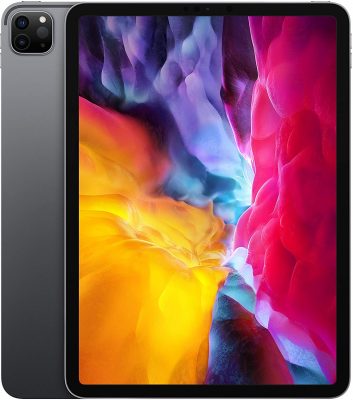 The iPad Pro 12.9-inch boasts a sharp and smooth 120Hz display and a completely unrivaled raw processing power, making it a gamer’s top tablet for gaming choice. The 11-inch model is manageable and affordable. Gamers who like playing games like Civilization VI and other iPad Pro games can opt for the 12.9 inches model for a bigger display.

The stark difference from its predecessor is that iPad Pro 11-inch comes slightly lighter and is not entirely laminated. These engineering changes make the iPad Pro easy to repair should there be a need. While it works well outdoors, users might find themselves needing to crank the brightness all the way up to see what’s on the screen.

Those who use tablets for games and work will be served well by this product, thanks to the A12Z Bionic chipset paired with octa-core CPU and GPU. In terms of battery life, Apple’s iPad is capable of running for 10 hours. 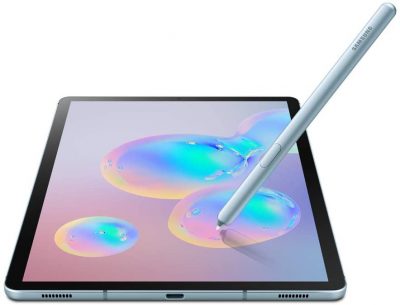 The Galaxy Tab S6 shares almost the same design as the iPad Pro 12.9-inch, especially with its large, rectangular slabs, uniform bezels, and rear design. Samsung also opted to use aluminum instead of glass, to avoid shattering the device in case it’s dropped.

Its engineering design makes the Tab S6 lightweight and feels well on the lap. It can also fit in most small bags as well. Moreover, it comes with an ‘S Pen’ and is kept in place by magnets on the oblong indent on the back.

While iPad Pro has a slight advantage when it comes to screen size, Tab S6 does not fall short in being the best option among all Android gaming tablets in the market. Although, it is a bummer to know that Samsung does only offer the Tab S6 in a 10.5-inch display.

Additionally, Samsung claims that the Snapdragon 855 processor makes the Tab S6 a good substitute for laptops —  if users can live with some quirks and the absence of some desktop applications.

Perhaps one of the starkest developments of the Tab S6 is the inclusion of a fingertip sensor, the same ultrasonic technology found on the Galaxy Note 10 Plus. However, it’s optical, making it unsafe and less reliable than most security features on mobile devices. 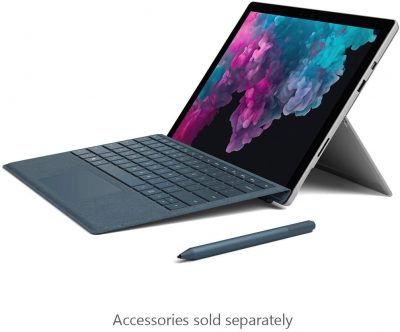 Microsoft Surface Pro 6 might as well be the best gaming tablet available among the Surface line-up and can be categorized as one of the cheapest Windows tablets available in the market.

The Surface Pro remains a stand out due to its compactness, versatility, utility, and weight. It’s IPS screen offers a huge resolution of 2736 x 1824 pixels. This tab also has a battery life of up to 13 hours, rivaling its competitions, and checks the brief for gaming tablets. 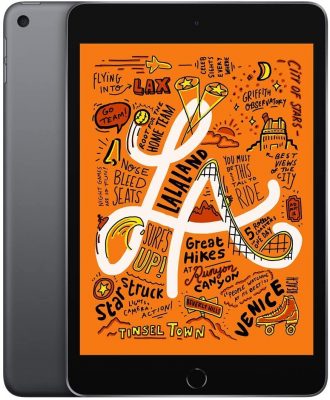 Despite paling in comparison to the smoothness of the iPad Pro and the bright display of Samsung’s AMOLED, the iPad Mini’s 7.9-inch display makes this device an optimal option. Its portability does not sacrifice its excellent performance as one of the best gaming tablet choices in the market. iPad Mini comes with augmented reality features with things like Angry Birds AR: Isle of Pigs. It also includes support for stylus pens for iPad, meant for those who enjoy sketching.

If you are spending most of your time playing, this unit’s battery life proves to be less than stellar. However, the overall experience with games that require much less action and graphic use can be unrivaled due to its A12 Bionic chip. As expected, iPad Mini comes at a price that is typical of Apple and there is strong competition for products of this size in the market. 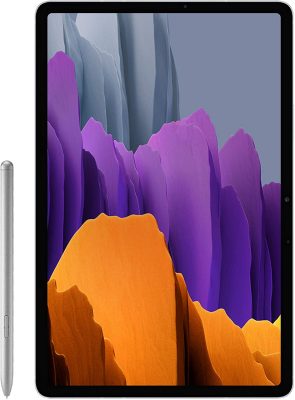 A good tablet device in 2020 should be able to perform both as a tablet and computer, with capacities to execute high duty tasks, including games. In short, it needs to be versatile in terms of its use. In that regard, the Samsung Tab S7+ (and Tab S7) gives users the versatility one can look for on a tablet.

Aside from its portability, Samsung Galaxy Tab S7+ offers a super AMOLED display panel that does the job for gamers who can’t get away with a bigger, shiny, and crisp screen display. With some games not designed for smaller screens and Microsoft introducing cloud gaming on Xbox Game Pass, this tablet will serve users well.

However, Android is an OS that has not proven itself to be optimized quite well for tablets unlike its competitor, the iPadOS. Samsung could have just made the Tab S7+ an alternative for PC laptops, given its internal engineering design and storage capability. 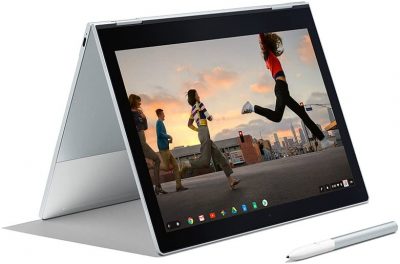 Tech experts have regarded Google Pixelbook i5 as their best Google laptop/tablet for gaming. It boasts a 12.3-inch sizable display and is just about the same size as other premium tablet options on the market. This tablet is, by far, the closest thing that can go head to head with the Surface Pro.

Google gives a 2400 x 1600 (235 ppi) resolution format with an IPS screen bolstered by Corning Gorilla Glass, making display viewable from any angle without compromising the image quality. Its internal engineering design boasts quality hardware and exceptional performance. This comes on top of the Chrome OS operating system which makes the user interface (UI) of any Chrome OS device clutter-free and easy to navigate. 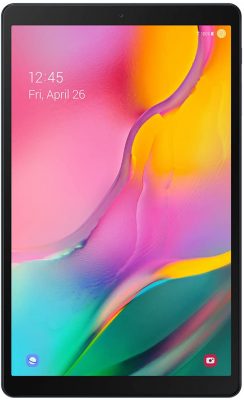 The Galaxy Tab A 10.1-inch unit is dubbed as the thinnest, lightest, and the most reliable model yet that offers the best experience for gaming, leisure, and work.

Paling in comparison to its newest relative, the Galaxy Tab A falls short of having an AMOLED display and has 1920 x 1200 resolution. However, it comes close to the Samsung Galaxy Tab S6 in the aspect of processors, as this bad boy runs with octa-core. It would be hard to press on this gaming tablet as it also offers a multitude of possibilities from a mid-range price point. 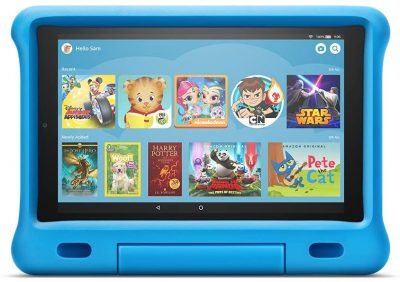 Regarded as one of the best and cheap gaming tablets for kids, the Fire HD 10 Kids Edition is excellent for parents who wouldn’t want to worry about their kids spending so much screen time and might access contents which are otherwise unsuitable for their age.

This age-appropriate tablet is perfect for kids below nine years old who would not be firing up Fortnite any time soon.

Of course, buying a gaming tablet for kids is not just a spur of the moment decision. It involves careful consideration of its availability, durability, specs, and on some occasions, its warranty. If your tab of choice has those, then it probably checks the brief. 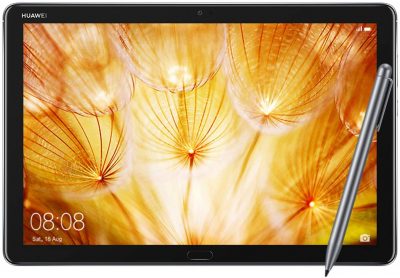 The Huawei MediaPad M5 Lite is a 10.1-inch tablet that boasts a sharp and crisp 1920 x 1200 resolution display, making it one of the best choices for a gaming tablet. It is lightweight and has a minimalistic approach when it comes to its overall design.

The MediaPad does run on EMUI 8.0 OS, which is based on Android 8.0. With its battery-saving technology, game enthusiasts will find this device hard to press especially on extended game time. 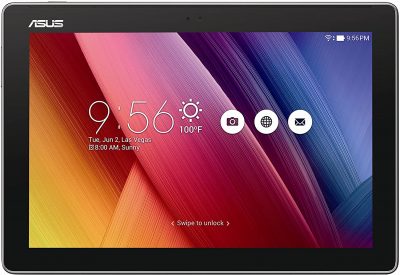 Getting the market’s best gaming tablet comes at a hefty price. But sometimes, a few options arrive at a cheaper rate yet is still capable of bringing the best tablet gaming experience. The ASUS ZenPad 10.1 is probably one of the best choices among the mid-range tablet devices on the market. It’s ultra-thin, fast, and can keep up with other products at twice its price point.

The ASUS ZenPad is also equipped with a 4,600 mAh battery and has a battery-saving mode designed for players who love an extended game time. It runs on Android 7.0 Nougat OS, making the ASUS VisualMaster Suite optimized for sharpness, brightness, contrast, and other display specs. 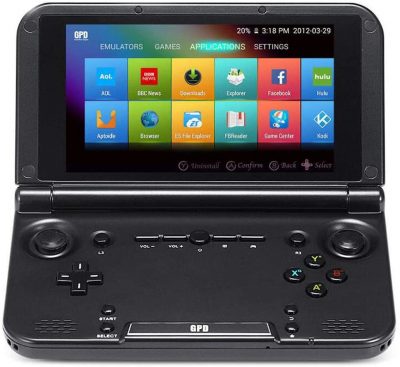 GPD XD Plus is technically not a tablet but still, it deserves a special mention. For those who can’t get enough of gaming consoles like the Nintendo and are looking for innovative gaming tablets, this device is a match made in heaven for you. The GPD XD Plus does combine the form factor of a Nintendo DS and the internals of an Android (or Windows) tablet.

This 5-inch display bad boy comes with some powerful hardware, including a 1.7GHz CPU, PowerVR GPU and operates with built-in Vulkan Engine support atop an Android 7.0 OS. 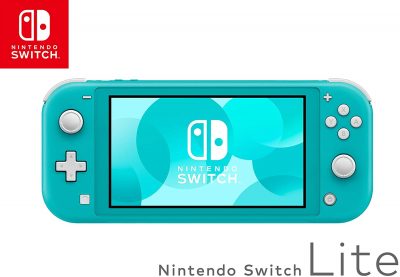 Breaking the list of gaming tablets and phones is the Nintendo Switch Lite. We know that this isn’t technically a tablet, but it is a formidable device with a touchscreen and built-in controllers.

With Thanksgiving and Holidays coming, the Switch is a perfect gift to any video game enthusiast as it has almost the same price point as some other affordable gaming tablets. While the games for this device can only be bought from Nintendo’s Game Store, it does offer a variety of titles such as Fortnite, Super Smash Bros, Mario Kart, The Legend of Zelda: Breath of the Wild, Skyrim, and Minecraft. 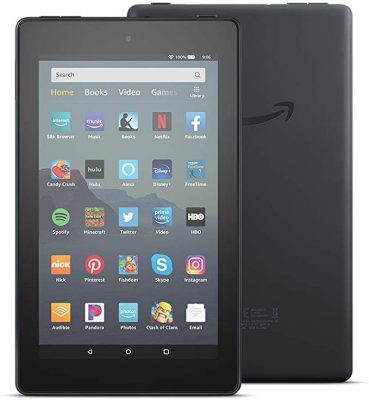 The Amazon Fire is specifically built for reading, watching videos, and you guessed it, playing games. This makes the price point for this device very affordable, beating the competition on the market at entry-level.

Fire 7 has a fairly basic and compact 7-inch design. While it definitely is not the top choice for a gaming tablet, it does pretty well when in terms of performance and ergonomics.

Owning one of these tablets does seem to check the brief for those who wish to get their works done, as well as those who just want to enjoy their ‘me’ time by watching movies or playing video games. While most features in these tablets pretty much resemble what smartphones do offer, the decision to own a second (or even a third device) does boil down to classifying the intended purpose of each device.

If you’re one who does a lot of typing while on the road and then prefers to enjoy some time off afterward, we do suggest owning a tablet and then combine it with detachable keyboards with trackpads and mouse. Otherwise, if you’re just after the thrill of playing some hardcore video games, choosing the best gaming phones might just do the trick for you.

How to Get Karma on Reddit [12 Fast and Easy Ways]