The endless march of technology continues on, and multipoint Bluetooth earbuds are among the newest ideas in the market. You might own a pair of true wireless earbuds, but it doesn’t mean you own a multipoint one.

Imagine this: you are settling down in front of your computer to watch a movie with your earbuds on, but you know that your job has you on call at any time. You would never know when your smartphone could ring at any time with a WhatsApp message or a phone call. So what do you do?

Usually, you would take one earbud out and just watch your show while trying to catch the notification message from your phone. But, multipoint Bluetooth earbuds can change that. We will explain how in this article!

What Are Multipoint Bluetooth Earbuds?

There are three main profiles multipoint headphones need for them to work: Advanced Audio Distribution Profile (A2DP), Hands-Free Profile (HFP), and Headset Profile (HSP). The device paired to a multipoint Bluetooth earbud or headset should be compatible with the A2DP profile and either the HFP or HSP profile.

Multipoint technology requires the A2DP profile to allow it to stream music or audio from the linked device. Also sometimes called “Bluetooth audio streaming,” this lets the device stream audio from smartphones, laptops, desktops, radios, and other Bluetooth equipment.

Meanwhile, the HFP and HSP profiles use synchronous connection-oriented (SCO) links to handle phone calls and audio for video calls. This “handling” includes using the buttons to put calls on hold, end the call, and other related functions.

Aside from those three profiles, Bluetooth media streaming as well as multipoint Bluetooth earbuds and headsets usually use another Bluetooth profile, the Audio/Video Remote Control Profile or AVRCP. This profile allows users to use their Bluetooth device as a remote control for their media player, similar to what HFP and HSP do for phone calls.

How Do They Work?

As we said earlier, multipoint Bluetooth earbuds and headphones can use either simple or advanced multipoint Bluetooth. The main difference between the two is how they work when connected to two devices. Both configurations do allow notifications and message “pings” to come through, regardless.

Meanwhile, advanced multipoint Bluetooth earbuds and headphones allow users to place previous calls on hold on the primary device when their secondary connected device has an incoming call or another continuous sound source.

While both technologies are integrated into some Bluetooth 4.0 and up-equipped devices, a lot only support simple multipoint Bluetooth.

Now that we have hopefully convinced you of the superiority of multipoint Bluetooth earbuds and headsets, we will present you with a list of what we consider the best in the market. These headphones and earbuds are aligned with the business side of the market, which may be worth a little more than usual. 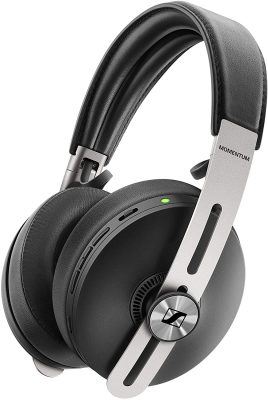 Our pick for best of the best when it comes to multipoint Bluetooth earbuds and headphones is the Sennheiser MOMENTUM 3. Built with Sennheiser’s trademark high standards and quality, it is made with genuine leather and has a three-button interface to control your music and calls.

Due to its matte steel arms and headband, it has a good clamping force that would not let it slip off your head easily. Aside from that, it can also connect with Sennheiser’s Android and iOS Sennheiser Smart Control app that lets you access the MOMENTUM 3’s three different noise cancellation modes and its built-in equalizer.

While a mostly-Bluetooth wireless device, the Sennheiser MOMENTUM 3 comes with a 3.5mm audio jack that lets you use it as a wired device when its battery runs out. When the battery does run out, though, you can charge it up with the included Type-C cable with included Type-C to Type-A adapter.

Also See: The 15 Best Senneheiser Headphones of All Time 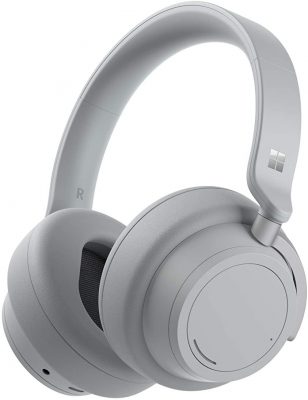 Aside from these factors, it only weighs a light 0.64 pounds or 0.25 kg. It also has 13 levels of active voice cancellation, two buttons (power and mute), and two dials (volume and noise cancellation). Similar to our premium pick, the Microsoft Surface Headphones 2 also comes with a USB-C cable and a 3.5mm audio cable straight out of the box. 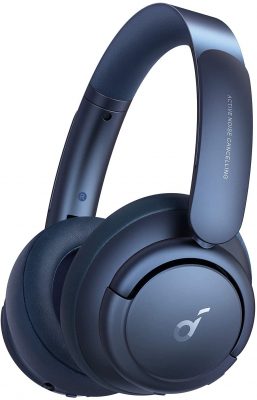 Our best-value choice comes from Anker, the Soundcore Life Q35. You can be sure of the best quality since the Soundcore Life Q35 comes from Anker, a brand known for having strict quality-control measures. That said, the Life Q35 is not as luxurious as the premium Sennheiser Momentum 3 and uses faux leather and full ABS plastic on its build and body instead of more expensive materials.

While it does look bulkier compared to the previous two multipoint Bluetooth devices, the Life Q35 has one big advantage against the two of them: its phenomenal battery life. This extended battery life may be due to the company’s start and original focus on portable chargers and power banks.

Aside from that, the Life Q35 also has three noise-canceling modes, USB Type-C connections, and a backup analog 3.5mm audio cable in case its 40-hour battery runs out.

The Jabra Elite 85t is Jabra’s best multipoint Bluetooth earbud in the market. Aside from its great build quality, the Elite 85t comes not just with active noise canceling but also HearThrough technology.

HearThrough lets you hear things beside you and your surroundings naturally. It does this using its dual microphones that also help modulate the earbuds’ active noise cancellation for clear and natural calls anywhere you go. Aside from this, the Elite 85t also has an IPX4 waterproof rating and is compatible with Jabra’s own MySound app. 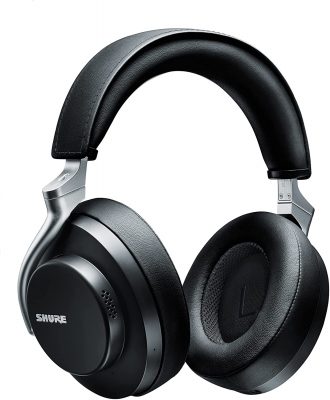 While Shure is best known in the audio industry for their microphones and Bluetooth speakers, they also have a good range of headsets and earphones. The Shure AONIC 50 is one good example of that.

It comes equipped with ANC technology and an “Environment Mode” as well. Both of these features can be accessed through Shure’s free ShurePlus PLAY app on the Google Play Store and the Apple App Store. The app also has other features like a built-in equalizer and button customization.

Aside from those features, the AONIC 50 is built for durability, with a protective carrying case included with each purchase. The AONIC 50 can also fold the ear pads sideways for ease of use and portability. This ease, coupled with its decent battery life and the 3.5mm audio cable port, lets its users bring it anywhere, even after its 20-hour battery gives up. 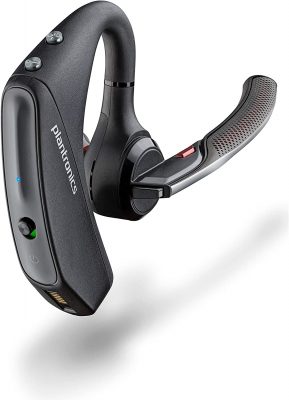 Looking like the stereotypical “working” earbuds, the Plantronics Voyager 5200 is built from the ground up for the businessman on the move. It features a four-mic noise-canceling system that properly filters out background noise and other sounds from audio and video calls. The Voyager 5200 also has a Bluetooth range of up to 98 ft or 30 m that lets you stay fully hands-free even when driving or walking away from your phone.

Aside from these features, the Plantronics Voyager 5200 is also comfortable enough on your ear to let you wear it all day. You can also get an optional charging case and docking stand to give your earbuds 14 hours of extra charge! The Voyager 5200 is also certified to work with Microsoft Teams, Skype for Business, Zoom, Google Cloud, Mitel, and other programs and devices. 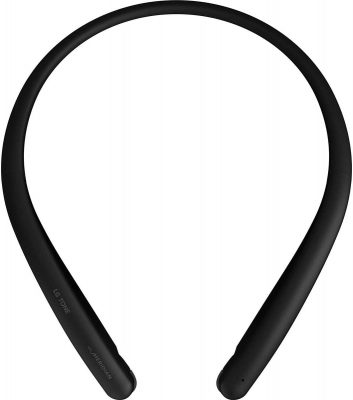 While it does have a great price, there is not much to say about the Style SL5 except for its, well, style. The LG TONE Style SL5 has a unique form factor, combining a neckband and the traditional wired earbuds in one “wireless” design.

While it is up in the air whether it is a “true” wireless earbud, the Style SL5 does have some features that place it as the seventh item on our list. This includes its dual-microphone layout, the notification “vibration” feature on its neckband, the 10 minutes “fast charge” every three hours of use, and its light 1.5 oz weight. 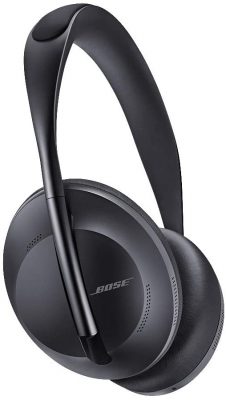 It features 11 levels of active noise-canceling with an all-around voice pickup that automatically detects and cancels out wind and other ambient noises. Aside from that, it has assured compatibility with several voice-activated assistants like Amazon’s Alexa and the Google Assistant for customized weather, navigation, and other tasks. 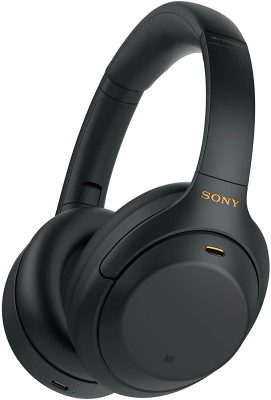 And finally, the last on our list of multipoint Bluetooth earbuds and headsets, Sony’s WH-1000XM4. Sony’s flagship Bluetooth headset has it all and topples even Bose’s Noise Canceling Headphones 700 and our premium pick, Sennheiser’s MOMENTUM 3.

There is one big reason we did not choose it as our premium pick or place it higher on this list, though. That reason is due to its price that is almost consistently priced over $300 even during sales and promotions.

Aside from its price, it is the best of the best on this list with its 30-hour battery life, superior noise cancellation technology, foldable pads and frame, and comfortable ear cups. If you really need the best and have the money for it, we suggest getting the Sony WH-1000XM4.

As seen with Samsung’s Galaxy Buds Pro and Apple’s Airpods, Bluetooth switching allows users to switch audio sources between their devices without having to re-connect their Bluetooth connections. Basically, the earbuds automatically detect when music or audio from one of its paired or linked devices have played and then switches their connection to that device.

The main difference between the two is that advanced multipoint Bluetooth earbuds and headsets allow its users to receive sounds from two devices at the same time. While limited when it comes to having just one continuous “primary” call or music stream, advanced multipoint does let users continue their call while still hearing messages and pings from another device. On the other hand, Bluetooth switching would force users to choose only one device to listen to at a time, whether for calls or for notifications.

Other Earphone and Headset Options

We hope that you found a multipoint Bluetooth earbud or headphones for yourself. Remember, Bluetooth devices are only as good as the signal you can get, and if the signal is interrupted and blocked, your devices would not work.

For audiophiles and music lovers who are afraid of that kind of thing happening, we suggest looking into open-backed and closed-back headphones instead.