Poly, formerly known as Plantronics, is one of the established makers of quality wireless headsets often used in offices and at home. The company prides itself on producing Platronics headset pieces that combine state-of-the-art sound engineering and quality with a sleek design. This is essentially an important move in terms of development since headsets have become such an integral part of everyday corporate operations.

Telephone headsets have become tools for business mobility and efficiency. In addition, more and more companies are employing the use of wireless headsets, or just the regular ones, to ensure the business deliveries get done despite the logistics. With this list featuring some of the best Plantronics headsets, you can safely assume that Poly (Plantronics) is, indeed, the best maker of headsets perfect for office setup.

Whether you are working from the office or from home where the use of a telephone headset is required, you will never go wrong with a Plantronics headset. Here are our top picks of headsets produced by Plantronics. 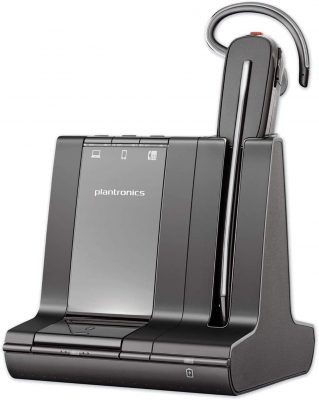 Starting our list is the Plantronics Savi 8240 Wireless Headset — a Poly headset that redefined call efficiency in any workplace setup. This mono headset has three wearing options suited for a staff’s preference and comfort, has a noise-canceling mic capable of decreasing noise in the background, and a triple connectivity option. The Plantronics Savi 8240 can be used with a desk phone, softphone, or mobile phone; this makes the headset convenient for managing day-to-day office tasks with more efficiency and less hassle.

The Plantronics Savi 8240 Wireless Headset is capable of delivering up to seven hours of talk time on wireless and offers superior audio quality, thanks to the DECT technology under its hood. The whole headset weighs only around 21 grams and should be comfortable to use at extended periods. 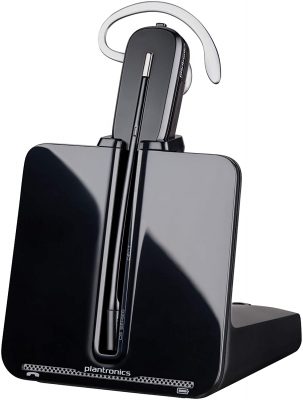 The Plantronics CS540 Wireless Headset is known for its versatility in terms of wearability and its overall weight. This single-ear Plantronics wireless headset features two wearing options: have over-the-ear and over-the-head wearing options. This is particularly designed to ensure the headset fits a staff’s wearing preferences, which can actually help boost productivity. On a perky side, these wearing options allow those conscious of messing their hair to still be productive.

Moreover, the CS540 wireless headset checks the other boxes we like about a professional-grade headset including being able to carry out 7 hours of talk time allowing staff versatility. It’s lightweight — only weighing  21 grams making it the lightest headset in the market. Its ability to remain connected by up to 350+ feet away without losing audio quality is also impressive. 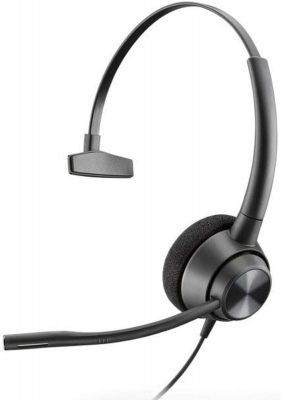 The Poly EncorePro 310-QD is a headset preferred by many call center agencies in the US (and even around the world) because of its affordability, uncompromising acoustics, and voice optimization features. This Plantronics headset also boasts a noise-canceling feature, which is a wise investment for a company running a call center operation.

However, there is really nothing much on the design of the headset; it takes the common headset design we see daily. But we like how lightweight the headset is that it makes you wonder how it can also have an adjustable boom mic and soft, replaceable ear cushions.

With the Poly EncorePro 310-QD headset, you can be sure to only have the best quality, smart features, and reliable company headset. 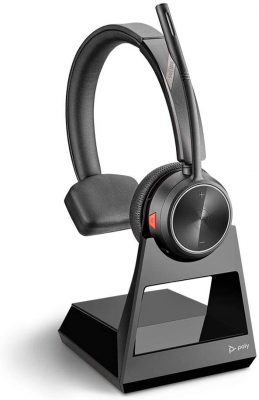 If you want a hybrid over-the-head headset and you don’t mind so much bulkier headsets, then the Poly Savi 7210 D might be the one for you. This Plantronics wireless headset is more powerful than the Poly EncorePro 310-QD in terms of range; it can support connectivity of up to 400 feet of roaming range and offers up to 12 hours of talk time. That means better productivity and flexibility for staff using this particular headset. Despite the bulky appearance, the Poly Savu 7210 D is comfortable to wear with an over-the-head monaural headset.

In addition, the headset comes with a noise-canceling microphone boom and DECT-certified audio for a premium listening experience. It also has one-touch control to manage whether to answer or end calls and volume adjustments. 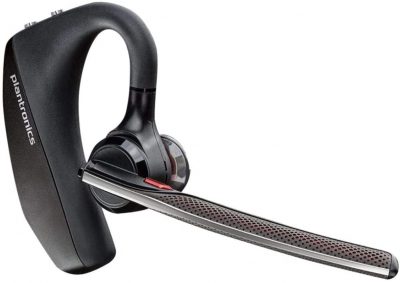 This particular Poly headset prides itself on its versatile connectivity and Bluetooth technology. It is one of the Bluetooth headsets in the Plantronics fleet that is top tier and uncompromising in delivering professional-grade sound.

The Plantronics Voyager 5200 Bluetooth Earpiece has four microphones making it perfect to take calls whenever, wherever, literally. This is mainly due to the fact that the mics are equipped with noise-canceling technology under their hood as well. The whole headset weighs 20 grams only, which is relatively lightweight and perfect for on-the-move operations. The headset’s range is 250 feet from the headset base — not as robust as the Poly Savi 7210 D. Nonetheless, it does come with its merits in other areas where it outperforms its Poly headset siblings.

Additionally, the smart sensory technology used in this earpiece will allow versatile media controls to track forward or track back, audio pause, or play. This is a Plantronics headset that comes with Bluetooth v5.0 and has a dedicated Plantronics Hub mobile app for more features. 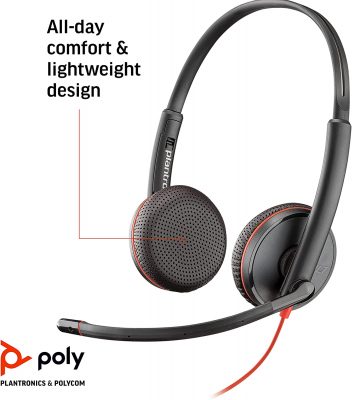 The Plantronics Blackwire C3225 binaural headset is known for two things: simplicity and reliability. The headset itself is comfortable to use and so easy to deploy for office use. As a signature Plantronics headset unit, it will surely deliver clear, natural, and rich audio quality to enrich staff productivity. Coupled with the classic headband over-the-head design, this Poly headset is equipped with speakers on both ears making it easy to focus on a call.

Moreover, you can rely on this headset anytime as it is available in both USB-A or USB-C variations. To wrap it up, this headset can also be paired with UC applications and softphones from Avaya®, Cisco®, Microsoft® to name some. 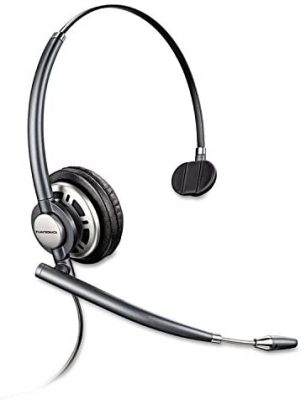 One of the top-tier corded headsets produced by Plantronics is the EncorePro HW710. Right off the bat, the headset features support for wideband (HD) audio, leatherette ear cushions, and a headband capable of preventing breakage. However, what we like the most about this Poly headset is the Quick Disconnect (QD) feature. This technology makes it easy to transfer from telephone, mobile phones, to VoIP softphones.

The whole headset weighs 53 grams only, making so lightweight and comfortable to wear. It is built in composite materials that also make the headset durable and sustainable. Additionally, the adjustable boom mic allows for clear audio registration so calls are crystal clear on both ends. 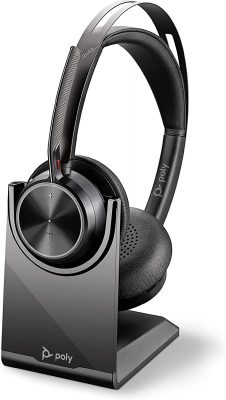 This Poly headset is a hybrid model that is equipped with hybrid active noise canceling (ANC). It is perfectly capable of producing a so-called “Focus Zone” that enables staff to focus on the call. With the Poly Voyager Focus 2, the caller would only be able to hear you through the pro-grade microphones using Poly Acoustic Fence technology under the headset’s hood.

Moreover, the Poly Voyager Focus 2 comes with the following features as well:

Additionally, the headset on wireless can deliver up to 19 hours of talk time. It can also be used with a cord to charge the headset.

Generally speaking, this headset has been engineered to be there for you with the comfort you need. 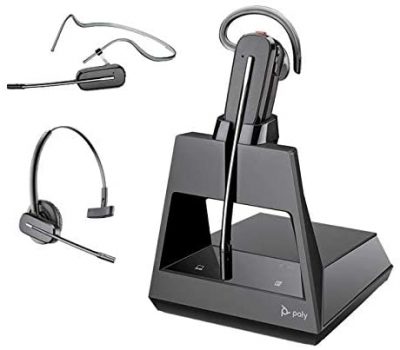 The Voyager 4245 Office is best described as the top choice Plantronics Bluetooth headset in a call center setting. The headset itself weighs just 21 grams making it so lightweight you can carry it around the office without losing connectivity — thanks to the Bluetooth 5.0 technology. With this, staff would still be able to do other work necessary for the day. The battery under its hood will allow anyone to have 12 hours of talk time in general but the batteries can be swapped mid-call should the need arise. The spare batteries are being charged using the dock.

There’s a Plantronics Headset for You

A Plantronics headset is reliable in delivering the best headset audio quality one could hope for. A good headset can increase productivity by 43% compared to either not using one or not using a good one. Plantronics, now known as Poly, ensures your office works get done efficiently and deliverables are locked before the closing of business time. Whether you liked them corded or wireless, there is definitely a Poly headset that will suit your comfort in an office setup.

How to Make a Private Story on Snapchat (A Complete Guide)