Smartwatches have been a staple of mobile technology since their inception. Although they may not have the boom manufacturers were hoping for, they are still impressive pieces of technology. But not all smartwatches are the same. Not only by their cosmetic appearances, but also on what type of Operating System it uses. In this article, we’re going to talk about Wear OS vs Tizen and see which OS is better for smartwatches.

Previously known as Android Wear, Wear OS is a variation of Google’s Android OS. That they designed for smartwatches. It utilizes Google Assistant tech. And can pair with Android Phones running version 4.4 or iOS Phones on version 9.3 and newer.

They also have traditional Bluetooth, Wi-Fi, 3G, and LTE compatibilities. As well as other features and applications. Thanks to this, it has a stable place in the market, especially tech-savvy consumers.

Tizen OS, on the other hand, is an open-source OS based on Linux kernel and WebKit runtime. Made by Linux Foundation, it’s used by Samsung in all of its smartwatches. Tizen OS is also used on Samsung phones and Smart TVs. A little known fact about it is that its roots back to the Samsung Linux Platform and the LiMo Project.

Let us now take a closer look at the Wear OS VS Tizen debate starting with products that are supported by these two operating systems.

Now Smartwatches are not made equal. There are a lot of choices on both Wear and Tizen OS’ that would fit in the top 10 lists. But for this article, we’re going to choose 2 for each OS. Starting with Tizen-powered watches, then Wear OS-supported devices. Not yet convinced on where to side in the Wear OS VS Tizen debate? Maybe these watches will do the trick. 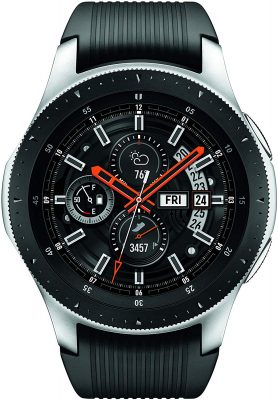 This watch is currently the best Samsung Galaxy Watch out there. Samsung went all out for this one. With a 1.3 Inch display that also comes in a 1.2-inch version, whichever version you choose would prove to be a hit.

They feature a rotating bezel that can spin to help navigate through menus and features. On the smartwatch that you own. A neat and tactile way to look at its features. In addition to this, they also feature Samsung Ray. It’s a service allowing you to make mobile payments on the go from your smartwatch. In addition to GPS tracking on your location.

Lastly, this is a waterproof smartwatch, allowing you to take it for diving activities. Truly a great watch to get.

Check out the Samsung Galaxy Watch today and get a waterproof smartwatch for your active lifestyle. 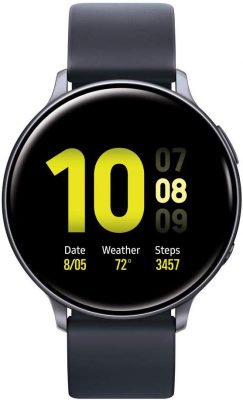 Samsung didn’t waste any time at releasing the Galaxy Watch Active 2 after only half a year. It also includes not only the features found on Galaxy Watch, but also other asked for features as well.

The watch is designed to be slimmer and thus better for those who work out. Unfortunately, it’s done this by removing the rotating bezel.

Instead, Samsung installed a digital rotating bezel. So that you only need to run your finger on the screen to navigate the watch’s features. It doesn’t have the tactile feel of the physical rotating bezel, but for what it’s made for? It’s perfect.

If you’re after a sporty smartwatch that you can use on workouts then this watch got you covered. Not only that, but it features a heart rate monitor. It can automatically track workouts. Has GPS, and enough storage to put your tunes in. Don’t get wired headphones though. Bluetooth ones are enough. If you don’t want to put music in you can always install Spotify instead.

Check out the Galaxy Watch Active 2 and own one of the best waterproof smartwatches available. 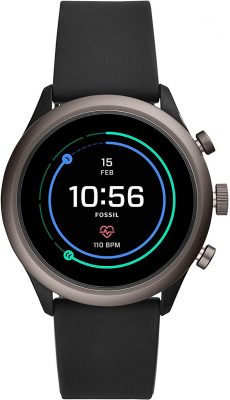 We’re now going on the Wear OS territory and we’re starting with the Fossil Men’s Sport Smartwatch. The Fossil Men’s Sport is a combination of values and features in a lightweight body. Allowing you to wear it day-to-day comfortably or on working out. Other than that, there’s also GPS, a 2-day battery life and access to the latest Wear OS apps out there.

In addition to this. It’s one of the first smartwatches to install the Qualcomm Snapdragon Wear 3100 chipset. Meaning a smoother experience compared to most smartwatches. So for those who wish for the best performance even at such a small thing, then this one’s for you.

Check out the Fossil Men’s Sport to get a sleek and budget-friendly smartwatch today!

The TicWatch E2 is almost the same as all the other Wear OS Smartwatches out there. There’s one thing that makes it great though, it’s the price! The watch has all the latest the Wear OS can offer in software. Yet still has a price that won’t burn a hole in your wallet.

Compared to the last-gen TicWatch E, the battery life is improved to over 2 days with normal usage. If you’re using most of the features like the ones for fitness expect that number to drop. In addition to this, it’s waterproof and GPS as well. Unfortunately, it doesn’t have NFC (Near Field Communication). So you can’t use Google Pay using this watch. But for the convenience and the price? I’m sure you’ll let that slide.

Check out the TicWatch E2 on Amazon and get a budget-friendly smartwatch today!

The first main difference between the OS is the watch selection. Most manufacturers prefer to adopt Wear OS for their products. This is because Wear OS is more flexible to developers than Tizen. Because of this, Wear OS is used by Motorola, Fossil Group, Mobvoi. And other tech companies to make smartwatches. With Fossil Group creating most of the supply.

Aside from known brands, we have more lesser-known products that use Wear OS. Also, each smartwatch model has its look that would appeal to the masses.

Meanwhile, Samsung has only created 2 models of smartwatches with the Tizen OS. The Galaxy Watch, and Galaxy Watch Active. In terms of variety, you can only get smartwatches manufactured by Samsung. They do however make up for it with other features and specs. With that, let us dive further into both operating systems.

Apps wise, both Wear and Tizen have a limited amount of compatible applications. Third-party apps make up most of the library. But there are a few big inclusions like Spotify, as well as Uber. But the majority of the apps come from smaller third-party devs or the OS vendor.

As expected, most of the apps you want to have on Wear OS comes from Google. Keep track of your notes with Google Keep, scroll through texts with Messages and stay on track with. If you’re used to the Google ecosystem, with no desire to switch to other services, Wear OS might be a better option.

In Tizen’s case, due to it being a proprietary operating system, all apps are developed by its manufacturers. You have Samsung Fit and other features developed by the brand. Again, there are only a few apps from big-name developers available on this OS. Much like Wear OS.

Smartwatches allow their respective users to track their fitness goals and track their vitals. If that’s your main intention, then Galaxy Watch is what you need. Wear OS smartwatches, they make use of the Google Fit feature to help their users with their health goals. However, the app has plenty of issues that plagued it since it’s released. Which is not ideal for people who want a consistent health tracking feature.

Google is a leading name when it comes to virtual assistants. Wear OS Smartwatches have built-in Google Assistant features for maximum efficiency. This is a factor why a lot of consumers prefer to buy a Wear OS watch. While the Wear OS version still can’t match its Android counterpart, the core functions are still available. An example of this is sending texts. Talking to 3rd-party services, looking at the current weather, and more. In addition to this, if your watch has a speaker Assistant Replies are spoken aloud.

Unfortunately, the Google Assistant still has its fair share of bugs.

On the other hand, Samsung Galaxy Watches have an assistant of their own, Bixby. Same with all the other Samsung gadgets out there. It might be limited compared to Google Assistant but it still is a welcome addition to Samsung watches. All that without the fear of errors and failure messages. So if you don’t mind a downgrade at some parts of the OS, then go for a Samsung Galaxy Watch.

Pros and Cons of Using Tizen and Wear OS

The Wear OS is an incredibly stable operating system, it’s tried and tested already with many years in the smartwatch landscape. That is why a lot of smartwatch brands and developers are using it for their products.

Unfortunately, this strength is also its biggest weakness. Albeit small updates, the OS needs a major update to keep people interested. Another con of choosing Wear OS is the cross-platform capabilities.

On the other hand, Tizen OS has a more limited amount of applications. But, it compensates that with the wealth of watch faces at its disposal. Want an OS that has a great user experience? Tizen is the one for you!

One of the biggest features of Samsung smartwatches is the bezel. You can browse features faster on Samsung watches faster compared to their competitors just by rotating it. And while other brands may feature the same innovation. its phones with Tizen OS has a better version. In terms of cross-platform capabilities, Tizen outshines Wear OS in this category.

However, you are stuck with Bixby Assistant though. But, you won’t have access to other necessities such as Google Pay and Maps features. Tizen OS smartwatches make use of the Samsung counterparts of these features. This is quite limiting especially if you rely on cashless transactions and maps for directions However, Tizen is still an incredible OS for smartwatches.

What apps are compatible with both OS?

You might be asking if there are a lot of apps compatible with both smartwatch OS? The quick answer is that it is limited and most of these apps are made by third-party developers. Plus, you can only use first-party apps on their respective smartwatches. They each have their app list for you to consider. Below you’ll see three apps that all work on Tizen and Wear OS.

If you’re the type of person that doesn’t drive a car but your work requires constant traveling, Uber is all you’ll need. The app does this by notifying Uber drivers that are in your vicinity. Once accepted, drivers will get your current location and get directions going there. This is an essential app for those who need to travel by land This app is an awesome inclusion in the list of apps compatible with Wear and Tizen watches.

If you want to listen to music anywhere you go, then Spotify’s your jam. The music streaming service has nearly all music audios that you could ever want. Create playlists that you can listen to depending on your mood. Want to listen to your favorite podcasts and then listen to new albums later? Well, you can do that and more on Spotify all while not using any memory space on your phone, good stuff!

If you’re the type of person that loves physical activities, this section is for you. Going to the gym, riding a bike, or swimming are ways to improve your conditioning. Well, Strava has you covered. Strava is an app that seeks to wake you up on time and start your workout on the schedule. How much you should run for your exercise, how far you went on your run that instance, et cetera. This is the app for people who want to improve their way of living.

How To Use PS2 Emulators On Your Android Phones?

10 Best iPhone Gimbal Stabilizers You Need for a Perfect Shot

What Is a Refurbished iPhone and Is it Safe to Buy?

How to Clean Your Apple Watch and Bands Effectively