Camera apps are not just about the fun filters, GIFs, stickers, and music you can use to pump up your photos. Some of those take the fun a notch higher, morphing your facial features in the snapshot to make you look old or like a baby. Nothing can be more entertaining, though, than gender swap apps that took the internet by storm in 2020 and 2021. But what exactly is a gender swap app and which is the best to download on iOS and Android devices? You’ll find out the answer to the question as you read on.

What is a Gender Swap App?

If you have been engrossed in everything on the internet recently, you would not be new to gender swap apps. If not, this overview is for you.

As the name suggests, a gender swap app makes you look like the opposite sex. It started as a simple filter in social media platforms like Snapchat before developers released dedicated apps of the same function. As for the underlying technology, a gender swap app uses artificial intelligence (AI) to scan areas of your photograph and apply filters on them. The resulting images are usually funny, so people are quick to join the bandwagon.

FaceApp is a multipurpose app that is perfect for gender-swapping and image enhancements in general. For the former function, it performs the job well. The finished image looks close to real, thanks to the use of AI. In terms of the latter, it is capable of applying different filters on photos, such as aging features, facial hair in hipster and other styles, normal to eccentric hair colors, and wrinkle, blemish, and pimple removers. The app has risen to prominence because of the aging feature, which many found comical.

Additionally, you can also use multiple filters on a photo, giving you more freedom to experiment with a look you want to achieve. Those often include adding tattoos in areas you wish, and so on. FaceApp is feature-filled, so be ready to exhaust those out. You also have an option to purchase a premium pack to get the functions not available on the free version of the app.

Snapchat has a good library of filters you can use to manipulate or touch up photos. And it is most certainly an effective gender swap app as well. However, unlike FaceApp, the filter that can be utilized for the funny enhancement is rather rigid. There are only a few adjustments that can be made to the filter itself to make it look realistic. That is not to say the filter is not good; it does make for good comic relief.

Snapchat constantly changes the filters on the filter band or menu; however, those are just floating in Snapchat. You will have to search for those in the app. For the gender swap filter, all you need to do is look up the “My Twin” filter by tapping the magnifying glass icon beside your avatar icon, which is on the upper left-hand corner of the screen.

Also Read: What Is Snapchat: Everything You Need to Know

Here’s another decent app that makes gender-swapping fun, Face Swap Booth. Like most gender swap apps, it is not solely focused on delivering quirky and comical filters for altering your photo in terms of gender. It has multiple features, which allow any user to play around with stickers.

This gender swap app is easy to use; just load your selfie photo and tap the switch button. The results are pretty decent because of AI that manipulates the image and applies the gender filter strategically. However, don’t expect the app to get it right the first time. Usually, it’s not the app causing the setbacks. Try loading a selfie with your good angle, lighting, and composition. That way, you can be sure to achieve the best results. 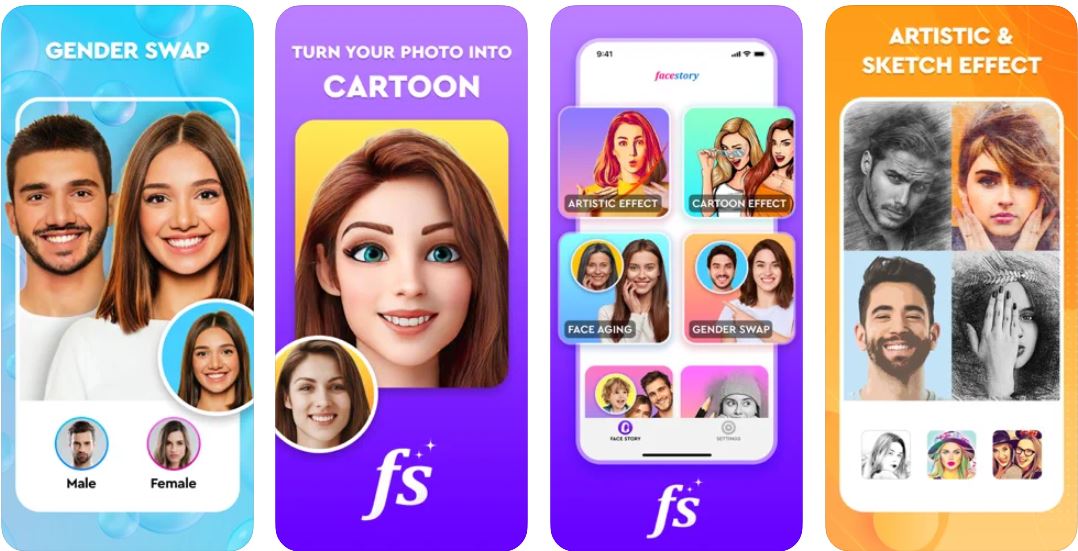 Face Story is a dedicated app for iOS devices you will love if you are fond of changing your facial features on photos. Similar to other apps we have on our list, this one comes with a barrel full of features, including filters for aging, cartooning, and face and gender swaps.

There are free and premium versions. The former is hard to appreciate because it sets a daily quota but the latter will set you back for $5.99 per month. Unlocking the premium version, though, gives you access to unlimited use of the app and other added features as well. For a gender swap app, it works pretty decently. 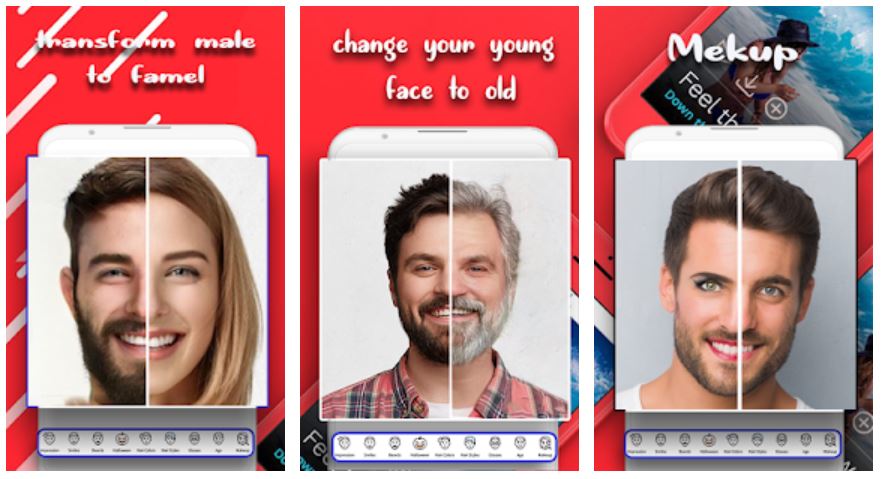 The rise of gender swap apps is mostly because of novelty or comic relief. It’s really about wanting to see how you would look like had you been a member of the opposite gender. The Face Changer Gender Transformation exclusive to Android devices delivers just that.

With a few taps on the app, you can switch your looks. You can even prank your friends into believing you’re dating someone when in reality, it’s just your gender-swapped photo. Furthermore, the app has additional features similar to what you can find in other apps on the Google Play Store. Picking it over its rivals is just a matter of what works for you the best.

Jiggy is mainly a video-generator app that takes a different approach when it comes to its gender-swapping capabilities. In contrast to the first five apps we have listed, Jiggy crops your head and puts it on the body of someone else. Users are quick to download Jiggy for this task because of the ease at which one can generate a GIF or video.

Banuba is a selfie application and it’s pretty straightforward. With its library housing more than 1,000 face filters, you’ll never run out of ideas to prank your friends on social media.

Banuba features a selfie editor, video maker, gender emoji, and makeup-retouching and face-swapping features. The app produces videos and photos. The former format can showcase a change in voice, which makes your gender-swapped footage even more convincing for pranks. Banuba’s strength though lies in its face swap feature where the gender-switching function is incorporated. It works differently from using a filter that alters your gender in photos, unlike in the first five apps in this list. Face swap merges your features with someone else, preferably of the opposite gender, to produce a new look.

Speaking of face swap, here’s an app that specializes in just that. Face Swap Live is filled with filters to use in tweaking your photos here and there. Unlike some apps, Face Swap Live offers the ability to use the filter in real time. That means you can see how the result would look like even before you snap the photo. The filter is automatically applied, which allows you to get a better angle and lighting for maximum results. On top of that, you can record yourself in a video and add voice filters to sound more feminine or masculine for better gender swap pranks.

Cupace focuses on many things and the app delivers. Aside from changing your gender in photos, you can make fun collages, background changes, and many more. What the app does best is gender-swapping group photos. Yes! Group photos, in addition to your usual selfies.

If you plan to use the gender swap feature on group photos, note that the app is not that adept at identifying faces. Hence, there is a need for you to manually highlight each face and do the swap. Nonetheless, Cupace is a decent alternative when none of the other apps of its kind are working for you. It’s only a bummer that the app is only available for Android users.

Even though Old Age Face Effect’s strength lies in the age filter, the app comes with a handful of other capabilities. It can double as a gender swap app that has a baby face filter and smiling effect.

Old Age Face Effect is fun to use when tweaking appearances. Similar to other apps, its AI effectively swaps your features with that of the opposite gender. The results are pretty convincing and quick to generate via a few taps. On top of that, you can use multiple filters in one photo.

Instagram is a widely popular app for video and photo sharing. Over the last few years, it made itself even more relevant to the selfie generation by adding a library of filters.

Thanks to that, you can apply various filters to pump up your Instagram stories and posts. A handful of the filters are for makeup, which can also be used for gender-swapping. There are also many stickers and GIFs for improving your gender-swapped look. It might be a little cumbersome to pick the right one, though. That is because there are plenty of options. Fortunately, you can save the filter so it will easily be available for you as you launch the Instagram story window.

Reface is another notable and decent face swap app that yields quirky and comical photos and videos. The AI on the app traces your features and combines those with someone else’s to produce a different look.

What’s impressive about the app is that you can produce a full-body gender swap and embed an audio file on it. That is why many users prefer this app when trying to swap their faces with pop stars, athletes, actors, or actresses; posting the resulting photos on social media for comic relief.

Similar to Snapchat and Instagram, TikTok has risen to prominence in 2020. It has gone from just a video-sharing app where users can dub audio or synchronize dance with the latest pop tracks to one that is loaded with filters. Enhancement options range from green screens, glitters, retro camera filters, and makeup. And if you didn’t know it yet, makeup filters are perfectly capable of altering your look to make it androgynous, masculine, or feminine. Those can be used in real time, giving you a preview before you hit the record button.

PortraitAI is quirky when it comes to the way it produces a gender-swapped image. It converts your photo into an old-fashioned painting, similar to those housed in the La Rouvre. Many Twitter users have used this app to convert their avatars to oil painting or watercolor portraits, which provided a sense of anonymity and curiosity to them. The app is packed with features to ensure you can play around with the instruments and filters for the look you are after. Furthermore, the built-in camera lets you see a finished portrait before you even press the capture button.

Wrapping up our list is this fun little app called Face Lab. It is an effective gender swap app that will surely make you and your friends laugh.

In one selfie upload, it can produce the bald, old, or baby-faced version of you. Face Lab also has in-app photo editing tools for generating the perfect image you have in mind. It produces pretty decent results.

With many of the listed gender swap apps showing ads and requiring you to upgrade for extra features, it can be quite an easy decision to just stick to the mainstream ones recommended. That is fine; however, the rest of the apps specialize in gender-swapping and do not rely only on makeup filters. That is why they are worth checking out, too. At the end of the day, though, it is still your choice which to download. One thing is sure. Whether you are planning to prank someone, hide your identity, or just need a good laugh, the apps we’ve shared have you covered!

Open Back vs Closed-Back Headphones: Which Is Better?

12 Best Ring Lights With Stand For Zoom, TikTok, and Vlogging

How to Free Up Space on Apple Watch Safely

Fitbit Pay: What It Is and How It Works (A Complete Guide)