Nokia has had quite an illustrious history since its founding. It started as a pulp mill, then turned into one of the most impressive phone brands worldwide. Though there were some pretty hairy occasions (the beginning of the smartphone era comes to mind where Nokia phones failed to adapt to the trend), it still managed to ride it out and be relevant in the industry.

Over the years, the brand rolled out many phones ranging from old-school phones to smartphones that are popular today. Nokia phones back in the day were known for their reliability and resilience; one can expect them to last as long as they’re properly taken care of. And even when the said gadgets aren’t cared for, they will still function as intended due to the heavy-duty casing. Back in the early 2000s where a phone means both functionality and dependability, Nokia phones were practically the best of the best in many aspects.

Nokia Phones Through The Years

Before Nokia got tied up in 2016 with Foxconn (granted manufacturing rights to Nokia’s handsets) and HMD Global (licensed to market phones under the Nokia brand), it already managed to combine good build quality with feature efficiency. That helped Nokia claim a place in the cutthroat mobile phone market. Just the worldwide success of its most iconic and nostalgic phones, the Nokia 5110, 3310, and 1100 to mention some, already speaks volumes about its product lineup’s image and brand’s legacy. Nowadays, Nokia seems to be experimenting in terms of upping its smartphone game, but the said feat of the past will surely not be forgotten no matter what happens.

With the partnerships changing Nokia as a brand, though, what’s in it for you? Are the newer Nokia phones still worth your money? If Nokia has been under the radar during your gadget buying sprees in the last few years, read on. Those questions you might have in mind are best answered by putting the spotlight on Nokia’s notable contemporary releases.

To find out if the brand you might have loved in the past is still worth going back to or staying with, join us as we review five of the best Nokia phones rolled out in the last two decades.

The Nokia 3310 came out in 2000 and was the most popular among Nokia phones during that time. The latter is mainly because of its durability. Users back then will tell you the phone can survive being thrown and is among the safest phones for kids — which explains present-day memes showing it can replace Thor’s hammer or something else that is indestructible. The other reason might have been the built-in games, particularly Snake II. Nowadays, the Nokia 3310 is better described as iconic and nostalgic. When you say Nokia, the image that first pops up into most people’s minds is probably that of the 3310.

Gone are the days when you only have to reminisce about the Nokia 3310 if it was one of your childhood Nokia phones. You can have it again in the form of the Nokia 3310 3G released in 2017. The revived version has nearly the same form factor as its predecessor, except for its funky color options. Specs-wise, its standout features are its sleek, customizable UI, 3G connectivity, and 1,200mah battery life that the classic doesn’t have.

If you’re looking for durability and Snake II in this phone, you’re definitely getting those! All in all, we think the Nokia 3310 3G makes for a great feature phone with swag (which is still thanks to the legacy of the classic Nokia 3310).

The Nokia N70 was the first of the N Series that began in the 2nd quarter of 2005 and was loved by fans of Nokia phones. The N70 had Symbian 8.1 as its OS. Furthermore, it supported unconventional hardware during that time: a 2MP camera (a selfie camera to be precise, although low-res in current standards) that had built-in flash and a VGA Camera System for video calls. Its other features are Bluetooth, digital music player, FM radio, 3D Symbian, Java games, and other S60 2nd edition functions.

At the time of the launch, the N70 had the biggest built-in memory capacity alongside its system storage. It was the penultimate Symbian OS 8.X device Nokia made, which is quite something back in the day. Needless to say, everything we’ve shared here is why retro Nokia phone fans are still looking for this gadget online, and why you might like it as a feature phone, too.

Now, we go to the newer notable models, starting with the Nokia 9 PureView that began as a rumor in 2017. Back then, the gadget might have just given the mobile community a hint that Nokia phones could still make a great comeback. Why not? One of the weird yet amazing rumors about it was the presence of FIVE cameras. That being real was unimaginable in the past, but not now when we are in the glory days of multi-camera smartphones.

The cameras of the Nokia 9 PureView are Sony sensors, all 12MP with 1.25µm pixels sitting at the back of Zeiss lenses. Three of those capture monochrome while the remaining two deliver RGB. As for how all the cameras work together, here’s a simple way to explain it: the monochrome sensors capture all the light data full of detail and add that to the RBG data to create the image.

Overall, the PureView is mostly a camera smartphone. But its capabilities are top-notch, the design is sleek, and the specifications are reliable. All these make the PureView a contender to be one of the best contemporary Nokia phones to have ever hit the market. 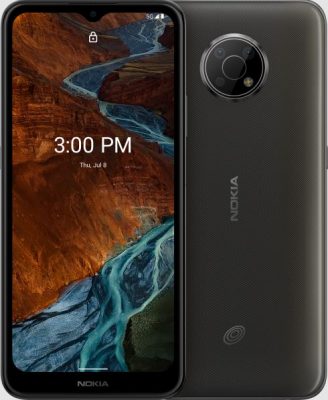 For Nokia to find its present-day charm for all buyer demographics, it is a must to jump into the latest trend — 5G. That is exactly what Nokia started doing, and it’s good that there are some 5G Nokia phones that are turning out to be promising. The one getting the most clamor from technology news sources seems to be the Nokia G300 5G that got launched in the 2nd half of 2021. What’s up with this phone, you ask?

The Nokia G300 is seen to be the most budget-friendly among all phones in the Nokia 5G ecosystem as of this writing. Also, the phone touts a 6.52in display, 16MP camera, Quick Charge 3.0, Bluetooth 5, and a 4,470mah battery — which is the standard for mid-range phones of the present day. There is no wonder that Nokia is pushing through with 5G phones like the G300. A mid-range lineup is the way to go for most phone brands nowadays. Just take a look at Samsung with its A-Series and Xiaomi with almost everything on its fleet passing as affordable, and you’ll agree.

But of course, the low price means that Nokia has cut back on some features. For example, the G300’s Snapdragon 435 chipset is a bit behind what the flagships and popular mid-range options have. Also, the fingerprint reader is on the side button instead of on-screen. Nevertheless, the G300 is great if you want to test the waters of 5G early. Whether it will be as iconic as the Nokia classic phones or not, only time will tell. 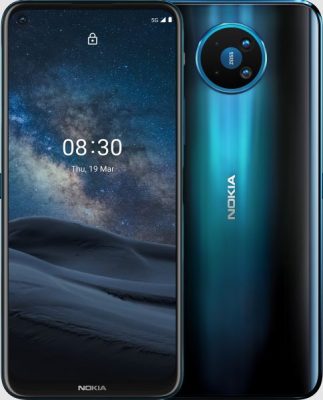 The Nokia 8.3 5G is also among the few Nokia phones that have made a buzz in the last few years. Although a 2020 release, meaning it’s slightly older than the Nokia G300, it has made its way to a number of smartphone roundup channels online.

Why? Apart from 5G, the gadget is known to be useable for professional photography. That is no surprise for it has a main camera that delivers 64MP, apart from the three ones for depth, and macro and ultra-wide shots. On top of that, the phone banners a Snapdragon 765G chipset, Bluetooth 5 connectivity, and a 4,500mah battery life.

Although we still have to see if the appeal of the Nokia 8.3 5G will be timeless or long-lasting as the iconic releases from the brand, here is our opinion about the smartphone. The gadget is great if you are into snapping photos from time to time or if you’re a cameraman who needs secondary or backup equipment (we know you might still prefer your DSLR most of the time). If not, the high-end camera specifications might just be overkill for you.

The Verdict: Should You Still Buy Nokia Phones?

All in all, Nokia’s still in the game when it comes to releasing reliable feature phones and smartphones — thanks to its own efforts and experienced partners. It looks like that will continue for a long time. There’s still some gas left in the tank for this giant, but it has to make bigger and bolder moves to be back to the top.

As for Nokia phones, they are still worth shelling out money for if you are into feature phones, want to experience nostalgia, or simply want budget-friendly phones that are 5G-ready. Whether you’ll think the same about the gadgets or not, we think we can all agree on one thing — Nokia definitely has the name and the legacy already, so we’re just waiting with bated breath for it to unveil something market-changing next.

15 Best Games Like It Takes Two You Should Play

Heroes of Valhalla Is Available on Early Access on Android