Fossil is a well-known wristwatch brand and continues to maintain a good reputation as a wearable of choice. The brand has a pretty good array of fashionable wristwatches in the market today. With the rise of smartwatches, it’s no wonder Fossil is playing catch-up by releasing its own line of Fossil smartwatch.

Fossil has initially released hybrid smartwatches when it started playing catch-up a few years ago. Following a positive response from the market, the market saw the next Fossil smartwatch running on Google’s Wear OS platform. And with Fossil’s Wear OS 3 on the horizon, we thought it’s the right time to feature the best Fossil smartwatches you can get your hands on today.

Fossil Smartwatch Options To Get

Categorized in such a way to help you buy efficiently, here are our top Fossil smartwatch picks. We included in this list some items from Fossil Group accessory brands like Skagen and Misfit. They do not necessarily carry the Fossil name but belong under the same umbrella company. 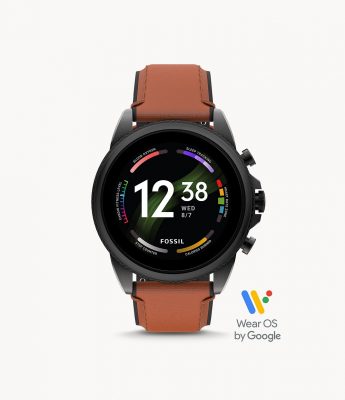 This Fossil smartwatch is part of the latest generation of the brand, runs on Wear OS, and is compatible with the latest versions of Android and iOS. The Fossil Gen 6, in particular, is among the models eligible for a Wear OS 3 update. And in comparison to the previous generation, it has the latest Qualcomm 4100+ chipset under its hood which enhances the watch’s performance by 30%. Fossil also boasts that the watch has better battery power and good connection capacity — 4x range with Bluetooth 5.

Additionally, the watch is equipped with state-of-the-art fitness watch capabilities to automatically track your personal goals, steps, sleep, heart rate, cardio, and SpO2 (blood oxygen). It also features a GPS tracker to track your distance and path. We also like the improvement in terms of pixels and display — the Always-On feature is now brighter and clearer. 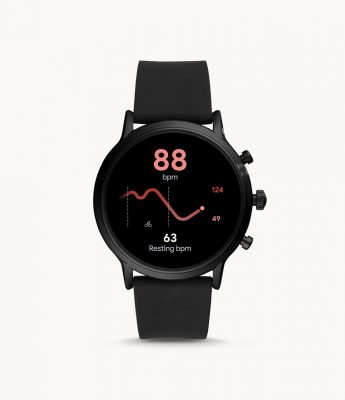 The Fossil Gen 5 fleet runs on Google’s Wear OS and is compatible with Android and iOS devices. Despite early critiques that the choice of OS was a bad idea as it’s a battery killer and plagued with bugs, Fossil maintains the use of Wear OS and improved it. The Fossil Gen 5 units in the market have the improved version of Wear OS and have better processors compared to other smartwatches which run the same OS.

The Fossil Gen 5 fleet is also one of the preferred wearables by active individuals because of its fitness functionalities like better battery life, Heart Rate & Activity Tracking using Google Fit, built-in GPS for distance tracking, and water-resistance rating of 3ATM to name some. Moreover, the watch is highly customizable with varying options for watch faces and apps compatible with Wear OS.

Read our full review of Fossil Gen 5 Smartwatch to know more about this wearable. 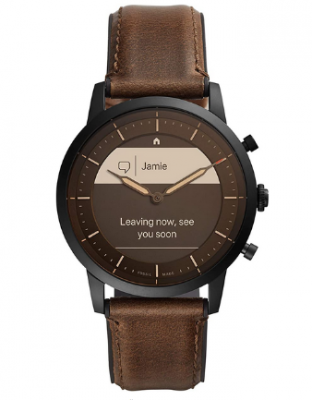 Fossil Hybrid HR is a smartwatch that delivers what it promises as a consumer product. It is wearable powerful enough to highlight the features one could possibly need on a daily basis.

Let’s start off by highlighting that the watch is compatible with the latest versions of Android and iOS devices. With this compatibility comes good battery life that can last up to two weeks in one single charge (but still highly dependent on how you use your Fossil smartwatch). Another thing we like to highlight about this wearable is its use of e-paper display — something we see on Amazon Kindle screens. This makes the display on the Fossil Hybrid HR still readable under any lighting conditions.

Additionally, you will never have to fear missing out as the watch gives off vibrating alerts every time you get an SMS or an email. 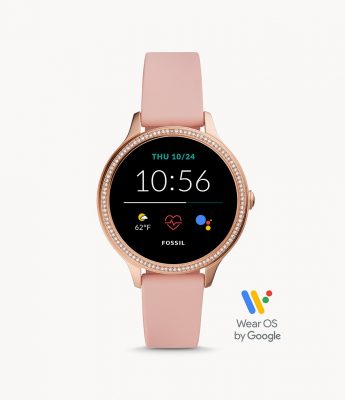 If you prefer a smaller watch but with almost the same features as the Fossil Gen 5 watch, this version might just be for you. The Fossil Women’s Gen 5E gets the same processor, RAM, custom battery modes, built-in speaker, and NFC for Google Pay as the Gen 5. However, the main difference between the two units is their display dimensions. On top of that, the Fossil Gen 5E is only available in 4GB capacity and can only support connected GPS instead of a built-in one.

The rest of the features, including Wear OS, Android and iOS compatibility, fitness smartwatch capacity, and decent battery life, remain the same. Moreover, this watch is available in 42 and 44mm sizes. 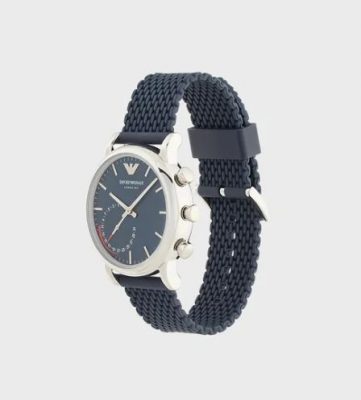 As mentioned before, Fossil Group has subsidiary accessory brands under its wings and Armani is one of them. Armani Emporio itself as a brand is known for producing traditional and elegant watches perfect for sophisticated men.

Armani Emporio Watch 3 in particular is a step upward from the previous Armani Emporio watches. In terms of design, the watch remains true to its goal of producing classic timepieces but this watch, in particular, adds a sporty elegance to it. One of the best Fossil sports smartwatches, the Armani Emporio has GPS tracking capabilities and works with the latest Android or iOS devices. On top of this, the watch also boasts heart rate monitoring which works perfectly when paired with apps like Fitbit Versa 2.

Lastly, in terms of battery quality, there is also a major improvement in the Armani Emporio Watch 3 in contrast to the previous models. However, how quickly the battery drains depends on how you choose to use your watch. 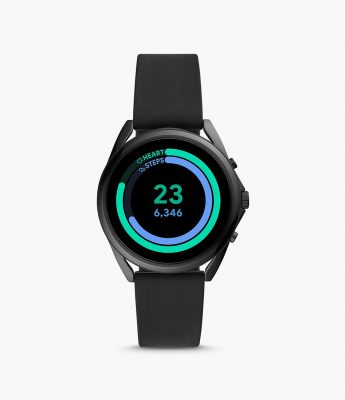 If you are always on the go and in need of a constant cellular connection, the Fossil Gen 5 LTE Watch is the best timepiece to have. With a plan under Verizon Wireless (only), you would be able to receive SMS and phone calls directly from your wrist sans a mobile phone. One of the drawbacks of this, however, is that it can only be activated through Verizon. Other drawbacks are that the feature’s availability is only within the USA and is only compatible with Android devices. Nonetheless, it is a pretty good deal for a Fossil smartwatch.

The watch is pretty much the same as the Fossil Gen 5 watch in terms of features. It has a good design and display, useful custom battery modes, and is equipped with fitness watch features like GPS and heart rate sensor. 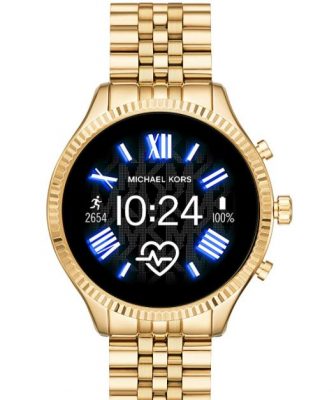 Similar to other Fossil Group smartwatches, the Michael Kors Access Gen 5 Lexington Smartwatch is also a watch powered by Google’s Wear OS. And while it can be paired properly with any Android and iOS device, features may still vary depending on the platform used.

The classic look of this timepiece should not fool anyone of its capabilities as a smartwatch. This watch comes with Heart Rate & Activity Tracking powered by Google Fit. Additionally, it is also equipped with a built-in GPS for distance tracking and a Swimproof design of 3ATM.

Other than the fitness functionalities, the watch is also capable of receiving smartphone notifications, managing your calendar, features for music control, and customizable with apps you can install. In low power mode, the watch can last for another two days on top of the 24-hour battery life capacity.

Lastly, as the header suggests, this watch is one expensive consumer item. Nonetheless, it is one of the most decent Fossil smartwatches in the market today. 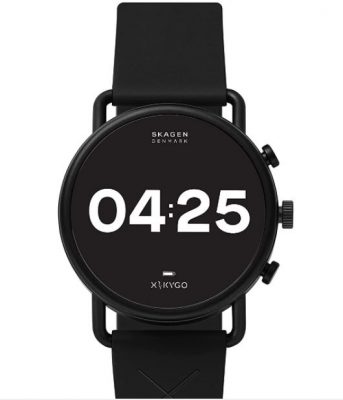 With the many issues plaguing the first two Skagen Falster watches, this Fossil Group smartwatch comes out as a major improvement. The previous watches have issues related to battery performances and overall performance. Skagen has moved to address these issues in the Skagen Falster Gen 3 watch.

The Skagen Falster 3 has the same specs and features as the Fossil Gen 5 watch we featured early on. The major improvement is in the battery life. The watch is now expected to have an extended battery life — thanks to the new, smart battery modes. The new feature ensures users would get the best out of the watch in one single charge. Additionally, the watch comes with a built-in speaker designed for Google Assistant and taking calls. On top of these, the watch has 4GB of storage and 1G RAM.

Essentially, the watch has a simple but decent design. However, the design is the deal-breaker in choosing which one to get — whether the Fossil Gen 5 or the Skagen Falster 3 — since both are similar in many respects. 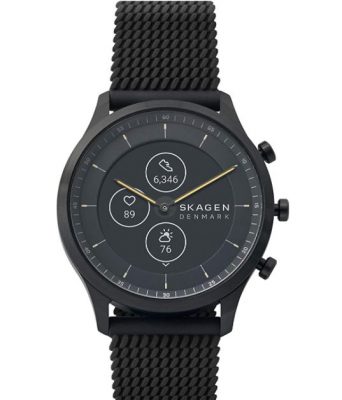 Wrapping our list is this hybrid Fossil smartwatch that comes as a major improvement from the previous generation of its name. The Skagen Jorn Hybrid HR watch has better and longer battery life, improved design, and the use of e-ink display.

The e-ink display on the Skagen Jorn Hybrid HR watch is comparatively better suited here compared to other hybrid smartwatches. With the Skagen Hybrid watch’s display dimension, users would be able to get more information from the watch’s face without squinting even under harsh conditions. Skagen says the watch can last up to two weeks in one single charge but is still heavily dependent on how you use the watch.

While there are better hybrid watches out there, among the Fossil Group fleet, this one definitely got our attention.

No one goes out of style with a Fossil smartwatch. So, whether you are going for a preppy, classic, formal, casual, or party look, there is definitely one watch among the Fossil Group fleet that will fit your look. These smartwatches may be more expensive than some of the mainstream consumer products in the wearable department, but Fossil definitely gives fashionable and sturdy timepieces.

Which one got your attention the most? Let us know!