Tactical smartwatches are just the latest in a long line of technologies that have helped soldiers and militaries with their work. Known for their quality and prized for their precision, military and tactical watches have graced the wrists of soldiers throughout the world. Along with other modern tools, these marvels also evolved away from mechanical means to incorporate “digital” and “smart” technologies instead. Proof of this evolution can be seen in how the US Navy SEALs have switched from their mechanical Rolex Submariners to Casio’s digital G-Shock DW-6600, which was a preferred watch in the early 2000s. Whether used as a simple timepiece or for their more advanced features, these rugged smartwatches are the best companion you can get. With the wide selection of military smartwatches for men and women available in the market, this quick guide will certainly help you make the right choice!

What Are Tactical Smartwatches?

There is no actual standard definition of what a tactical or military smartwatch is. Instead, there are a series of loose qualities that make a smartwatch “tactical.” The first is its rugged and robust construction intended for use in militaries or by thrill-seekers and extreme sports enthusiasts. Most of the best tactical smartwatches are MIL-STD-810 certified, a certification that is given to equipment passing US military standards for military use. This means that it has a high grade of practicality, reliability, and resistance to severe wear and tear.

The second requirement is its timekeeping precision, a must for military operations. Its presented time must be unaffected by most outside factors like shock or grime. This factor goes with the third one, water, dust, and shock resistance. Due to the expectations of war, these smartwatches have to withstand any abuse it is subjected to. Finally, the last requirement is to have some luminosity for nighttime operations. This means that you can still use and operate the smartwatch during the night or in dark areas.

For this list of the best tactical smartwatches, we will include a small table of the pros and cons of each smartwatch. Aside from that, we will note down some details on its features and functions that stand out. Without further ado, let us go onto the list! 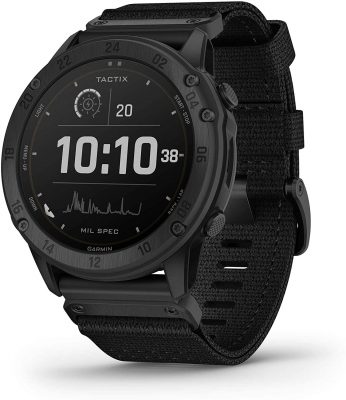 The Garmin Tactix Delta Solar really is one of the best tactical smartwatches out there. Not only does it match military standards, but it also goes several leagues further with an integrated user “kill switch” that automatically deletes any data on the device. Other features include specialized modes like Jumpmaster (for parachuting), stealth (turns off GPS positioning and wireless connectivity), and night vision (can be read with night vision goggles).

Aside from that, it also has AB-made software that lets users do advanced ballistic calculations in the field with presets for more than 1,200 custom measured bullets. If you want the very best for yourself or if you expect to be sent into hot zones, the Garmin Tactix Delta Solar should be your first choice smartwatch. 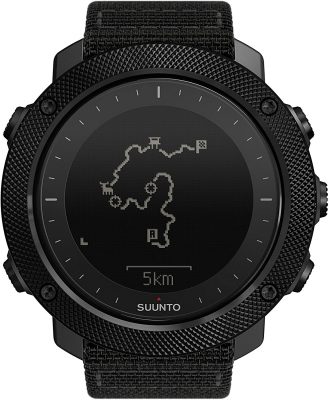 Our best choice pick for a tactical smartwatch is Suunto’s Traverse Alpha – Stealth version. This is a good pick for the outdoorsman as it has three helpful modes (hiking, fishing, and hunting) that you can turn on whenever you need. The Traverse Alpha also has a great battery that usually only needs a charge once a week, even with GPS and Bluetooth turned on. While it has a lot of great features, the UI is not intuitive at all, so read through the user manual to familiarize yourself with it. 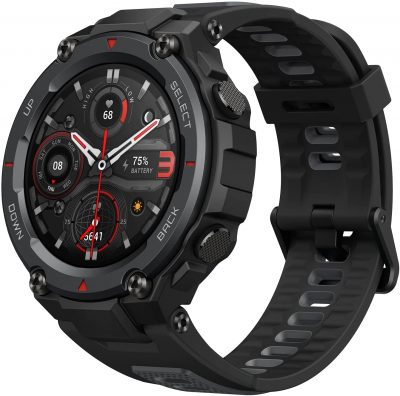 The Amazfit T-Rex Pro has a lot of features for the more sports-minded folks needing a tactical and rugged smartwatch. In addition to 100+ sports modes, it also has sleep quality, blood-oxygen measuring, and heart rate sensors for monitoring your vital signs. While there are reports of some connection issues for some users, this may be due to improper handling or smartphone compatibility issues. Overall, being MIL-STD-810 (G) certified, this smartwatch can take a beating and has a lot of sports modes that you can use everyday. 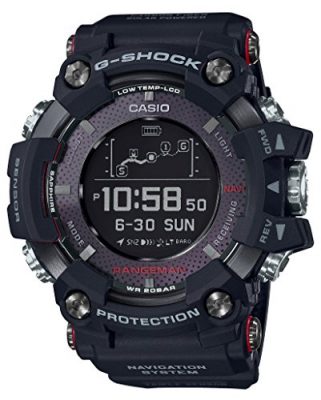 The G-Shock GPR B1000-1 Rangeman came out in 2018, but it’s still standing strong as one of the best tactical smartwatches. Some of the highlights of this device are its bezel which doubles as a GPS antenna, an increased temperature tolerance, and improved barometer, altimeter, and thermometer monitors. Its caseback is also made of ceramic to allow wireless charging alongside its solar charging features. Because of its handful of features, though, it’s not necessarily the most compact smartwatch out there.

The Rangeman’s biggest draw, however, is its GPS navigation and log function. These features can only be used after the smartwatch is connected to a phone with the G-Shock app through Bluetooth. 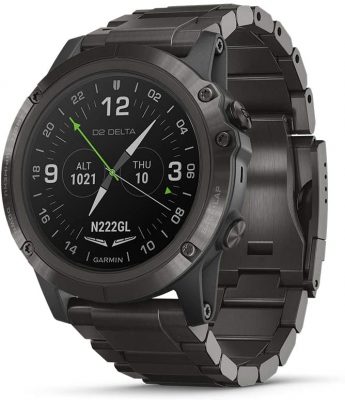 Another great tactical smartwatch from Garmin is the D2 Delta PX. It has a few features specifically targeted at pilots that’s why it’s advertised to aviators. These features include an embedded pulse-oxygen sensor, fly-to and navigation mapping, as well as space for 500 music tracks. Its best feature, however, makes use of its 1.2-inch color display to show high resolution (NEXRAD) meteorological reports (METAR) and terminal forecast information (TAF) when connected with a compatible smartphone. With all these features, the Garmin D2 Delta PX may just be your next best friend in the cockpit. 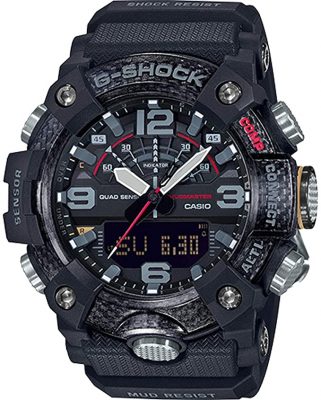 While the G-Shock Mudmaster may not be a tactical smartwatch with GPS, it does make up for it with its other sensors. Equipped with an altimeter, barometer, thermometer, a digital compass, and a step counter, this model is perfect for any extreme sport. Perhaps due to its decent pricing, it is quite popular with civilians and military men alike. This popularity does come at a cost, though, since fakes and imitations are prevalent in the marketplace. If you want a good timepiece that you can take almost anywhere, you should take a look at the Mudmaster. 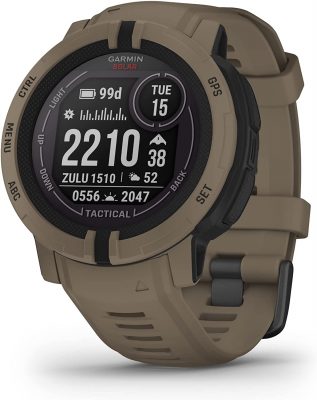 Another great choice for a tactical smartwatch is the Garmin Instinct 2 Solar – Tactical Edition, further development of the original Garmin Instinct. Although it is a downgrade version of the Tactix Delta Solar model, the Instinct 2 Solar has a lot of the same modes and features. These modes include night vision, stealth, jumpmaster, tactical activity, and its user-activated kill switch. Compared to the Tactix Delta, though, the Instinct 2 is more sports-focused, with built-in sports apps designed to work with its body monitors. When connected to a smartphone, it can also work with the Garmin Body Battery app like most other Garmin smartwatches. 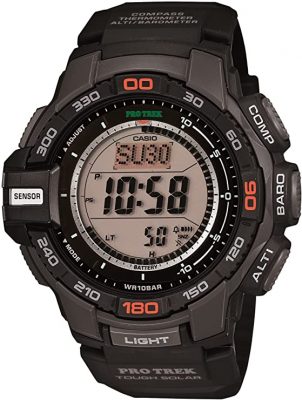 Casio’s Pro Trek (PRG-270-1) is arguably the most power efficient tactical smartwatch on this list. Not only does it use solar power, it also uses proprietary Triple Sensor Version 3 engine. This makes PRG-270-1 model’s standard barometer, altimeter, and thermometer sensors 95% smaller and use 90% less energy. Aside from the high build quality standards Casio has and its solar charging, the Pro Trek is pretty standard but still holds up to what is required of it. 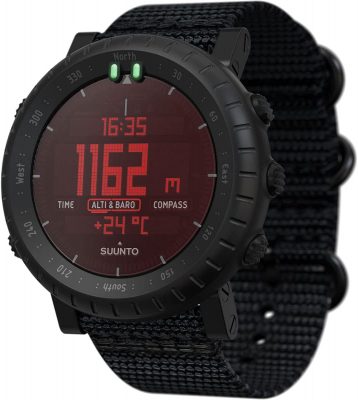 The Suunto Core Alpha is another MIL-STD-810 certified tactical smartwatch that checks all features you might be looking for. The Core Alpha really embodies its name by having the “core” functions required of it. While it may not have Bluetooth or smartphone connectivity, it does have the standard set of environment monitors (barometer/altimeter/thermometer). Overall it is a pretty standard work from Suunto that embodies their high build quality. 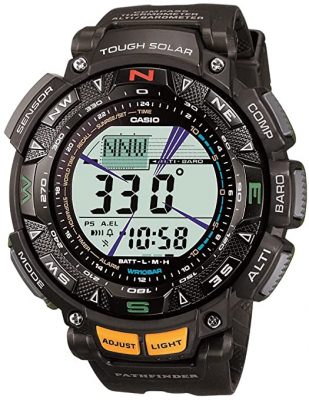 PAG240-1 is the older version of the Pro Trek (PRG-270-1), which you saw earlier on the list, but it doesn’t make it less deserving of its spot. Containing the same three monitor system, the only noticeable difference between this model and the PRG-270-1 is its size. It’s a bit larger than its successor and that is because of its bezels that are useful when making analog directional markers. 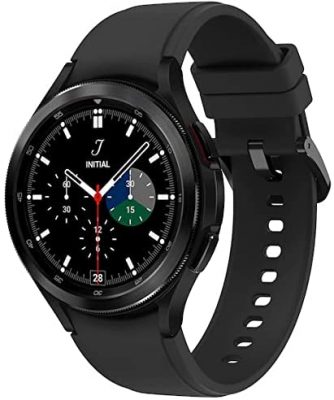 The final tactical smartwatch on this list barely qualifies as one — the Samsung Galaxy Watch 4. While not really a tactical or military-focused product, it does work like one in a pinch. It has several useful monitors and sensors like a barometer, accelerometer, gyro sensor, geomagnetic sensor, and a heart rate monitor. The best thing you can do with the Galaxy Watch, though, is to use its GPS functions which work with A-GPS, GLONASS, Beidou, and Galileo satellite systems. This quad system compatibility means it will work anywhere with a good signal. While it may not stand up to too much abuse, the Galaxy Watch 4 can be a decent tactical smartwatch.

What to Look for in a Tactical Smartwatch

Now that you know what tactical smartwatches are, let us get to a few tips on picking the best one for you.

Not all smartwatches are built the same since some have a titanium casing while others have reinforced wristbands. The materials that make up the smartwatch, specifically the case, are usually the basis for how durable it will be. Aside from its physical properties, you also have to factor in how trustworthy a brand or manufacturer is. Build quality has to do with how close their actual product is to the specifications they have laid out and how well they have made them. Overall, you want a smartwatch that is well built with good materials but would not burn a hole through your wallet.

The main advantage of tactical smartwatches versus their mechanical cousins is their integrated technologies. These technologies usually include things like GPS navigation, barometers, altimeters, and digital compasses. Aside from these, some watches can also connect with your smartphones through Bluetooth for more useful features.

As we said earlier, these smartwatches are expected to work even in the worst military conditions. While they are built to be worked to the bones, there are times when they need to be serviced. You have to factor in how easily you can send your watch to get repaired or to get replacement parts for it. Some brands are rarer in the US compared to others, leading to problems in repairing them.

Battery capacity, this one is pretty straightforward. Whether it runs on a removable battery or an integrated one, knowing how long a charge can last is always a plus. Smartwatches with higher battery capacity are always preferable to lower-capacity ones.

Aside from telling the time, backlit displays, and sensors, some tactical smartwatches also have additional features like solar charging and temperature resistance. While having more features is a good thing to have, do note that these usually come at a premium cost with “improved” watch models.

And so there you have it — 11 of our choice tactical smartwatches. Hopefully, at least one of these fine timepieces has caught your eye. If they haven’t, you might want to take a look at our more civilian lists, like one comparing Fitbit and Garmin’s lineup or one for the best running watches with music.