When Google released Pixel Buds 2 last October 2019, the company finally secured its spot in the “true wireless” earbuds competition. Unlike the original Pixel Buds, which are attached with a connecting cable, Pixel Buds 2 comes with no cord at all, making it more like the Apple AirPods. Aside from this, there are also oodles of notable improvements to check out and they’re worthy of your time and dime. So, if you’re wondering what the new features on Pixel Buds 2 are, then you’re in the right place.

In this article, we’ll walk you through the similarities and differences of both the first generation Pixel Buds and the latest Pixel Buds 2. Without further ado, let’s dive right into the highlight of the topic. 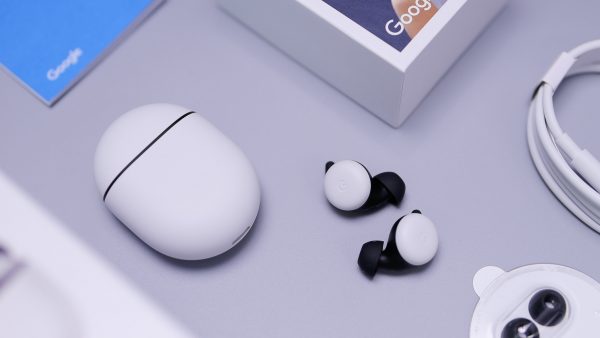 When the first-generation Google Pixel Buds debuted in 2017, the pair of earbuds gathered mixed reactions from the tech community. Its average performance and loopy design aren’t something anyone would fight for. Thankfully, the arrival of Pixel Buds 2 put an end to the numerous flak Pixel Buds garnered. To give you an overview of the Google Pixel Buds vs. Pixel Buds 2 competition, here is a comprehensive table showing both the earbuds’ technical specifications: 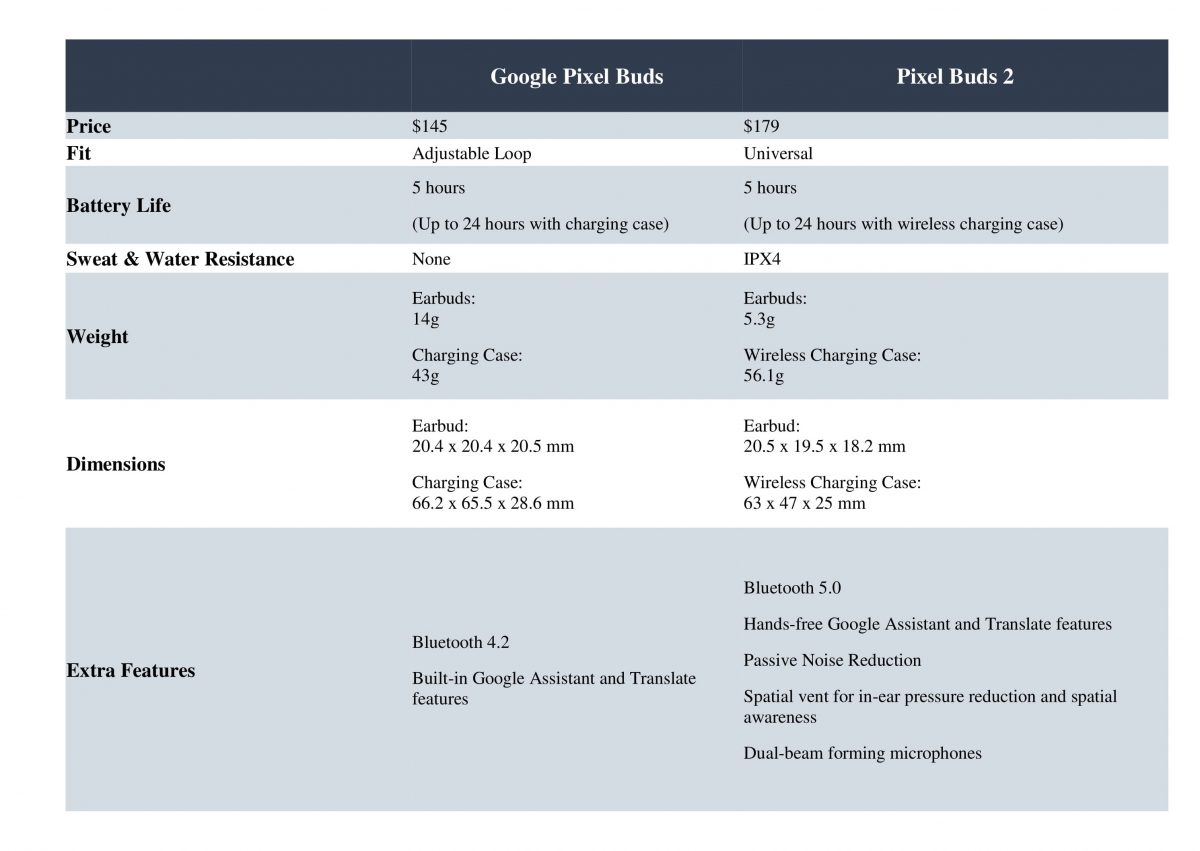 As you can see, there’s a big technical difference between the two. The Google Pixel Buds are cheaper than the Pixel Buds 2, but they actually have lower specs as compared to the latter.

The most notable feature of Google Pixel Buds 2 is the design and build. As previously mentioned, the Pixel Buds 2 employs a true wireless setup, completely overcoming the first-generation Pixel Buds’ cabled system. It also comes with a charging case just like most popular earbuds in the market. As for the appearance, it still has the “mentos-like” circular form from its predecessor. However, the design is tweaked in a good way to enhance the wearability and performance of the device.

Another distinctive feature you’ll notice about Pixel Buds 2 is the “stabilizer arc.” These soft silicone-like fins integrated into each earbud make sure that the device stays in place. A little clockwise turn of the buds is all you need to secure them. Unlike the famous Apple AirPods, Pixel Buds 2 doesn’t stick out once worn. They’re flush with your ears so it appears like you’re not wearing one if someone looks at you straight on.

When it comes to the build quality, it doesn’t disappoint you. It follows a solid matte plastic made from durable materials so you won’t have any problem breaking the buds or the charging case once you start using it. 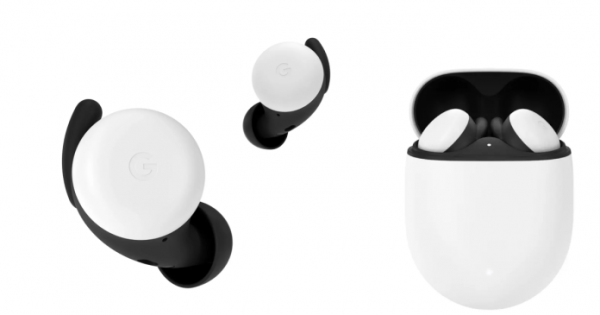 You can fill the battery of the charging case through the USB-C port. Also, it has a status light to indicate the level of its own battery and a signal LED for the charging of the buds.

How It Feels to Wear Pixel Buds 2

Those who tried the original Pixel Buds had an issue about its fit and comfort. They said wearing it was uncomfortable and that the device tends to slip out of their ears. Their relentless cry for improvement caught Google’s attention and so the company made sure to produce a new Pixel Buds model with a higher quality of comfort and fit that caters to all shapes of ears. That’s how Pixel Buds 2 was created.

Most silicon-tipped earbuds bring an unpleasant feeling of having a plugged ear. With Pixel Buds 2, however, you’ll get a spatial vent to reduce in-ear pressure and maximize environmental awareness. Moreover, the newly-improved sound port, which is longer and thinner than the previous model, paves the way for easier insertion into your ear.

Do you want to take these earbuds out for a day-long trip? You can, of course, but with reservations. Google claims that it can reach a listening time of up to five hours, the same power as the original Pixel Buds can render. However, not everyone has the same take as to how long the device really lasts if other features are enabled during use.

Many people claim that a full charge can only get you up to 4.5 hours, which is similar to Apple AirPods Pro with Active Noise Cancellation on. While this may not be a huge deal for some, other factors such as the unequal discharging of the buds can get into your nerves when you’re out in the field, away from home. This is because according to Google, “the two earbuds serve different functions at different times to maximize battery, one earbud may consume more battery than the other.”  There’s also no individual battery indicator when charging your buds so it’s difficult to determine the level of power each bud has.

Other improvements made to the charging case is its Qi-compatibility feature. That means aside from the USB-C charging, you can also charge the case wirelessly using any Qi-compatible charger.

If you didn’t like the sound quality of the original Pixel Buds, then you might want to check out Pixel Buds 2. Google made sure to ditch the awkward performance brought by the first-generation Pixel Buds by employing top-of-the-line hardware unto the Pixel Buds 2. These components include custom-designed 12mm dynamic speaker drivers, which provide excellent sound quality for true wireless earbuds. When listening to music, you’ll get solid clarity with well-defined bass that’s definitely far from the original Pixel Buds’ performance.

Aside from this feature, Google also uses a “hybrid acoustic design” where the silicon ear tips seal the ear to prevent the outside noise from leaking in. Now here’s the deal; will your ears hurt from wearing the buds for a long time? The answer is no indeed. As mentioned earlier, it has spatial vents to reduce the feeling of having a “plugged ear.” So you’ll experience great comfort while using the device as compared with the first-generation Pixel Buds.

Another highlight worth mentioning is the Adaptive Sound feature. What does this mean?

Well, it’s pretty simple. It can automatically adjust the volume depending on your environment. For instance, you’re in a crowded place with lots of noise coming from people and vehicles, and then you move to a quieter place like your home. When this happens, you don’t have to press anything to adjust the volume as you move. The Adaptive Sound feature does this right off the bat so you’re literally working hands-free with the device. Cool, right?

Are the Pixel Buds 2 good for calls? You’d be delighted to know that they render an amazing performance when making calls. This is because they have two beam-forming microphones that are geared towards isolating your voice. Plus,  the voice accelerators detect the movement of your jaw when you’re talking. Combine these features together and you’ll get an optimum on-call experience — less outside noise, more concentration on your voice.

The Pixel Buds 2 are jam-packed with additional features, which makes them better than the original Pixel Buds. Let’s dive right into the list.

One factor you should consider when buying cordless earbuds is the connectivity. After all, it’s annoying to listen to lagging music while you’re working outside. Thankfully, this it outshine the original Pixel Buds.

The first-generation Pixel Buds has Bluetooth 4.2 component while the Pixel Buds 2 employs the latest Bluetooth 5.0. That means Pixel Buds 2 pairs swiftly as compared to the original version. The connection remains rock-solid as well even though you wander more than 10 meters away from your phone. Moreover, there’s audio lag whether you’re listening to music or streaming videos on Youtube or Netflix.

Another thing about having the latest Bluetooth 5.0 capabilities is that you can now use your Android phone to locate your earbuds. That’s right. If you ever lose it, you can easily detect its last known whereabouts through your device.

You don’t have to hit the pause button when you take your earbuds out. With this, whatever you’re listening to will automatically be paused once you pull out the buds from your ears. Also, it will resume playback once you put it back in. Nice!

The Google Assistant and Translation features aren’t new to the Google Pixel Buds line. These were first debuted on the original Pixel Buds and now, they’re back on Pixel Buds 2 with faster and more accurate performance.

Instead of pressing any button to activate Google Assistant, you can just say “Hey, Google” or “OK, Google” and the program will automatically launch. Google Assistant also responds quickly to any of your voice commands compared with the previous Pixel Buds model, which usually takes a while acknowledging your voice.

In addition to the Google Assistant, Google Translate is also a major highlight of Pixel Buds 2. In fact, this feature uses built-in microphones to translate up to 40 foreign languages in real-time.

The original Pixel Buds costs $145 while the Pixel Buds 2’s price is $179. That’s a $34 price difference. If you look at the specs closely, the few extra bucks added to the latest model is reasonable since there are a whole lot of upgrades included. From being wireless to having the latest Bluetooth capabilities, these features are definitely worth every dime.

When the first-generation Pixel Buds hit the market, everyone knows the device has a lot of improvements to do. Thankfully, Google made sure that all of the original model’s shortcomings are packed in the second generation, which is the Pixel Buds 2. From ditching the cable to employing the latest hardware, the latest Pixel Buds deserves all merits it gets. Plus, it’s much cheaper compared to the other brands in the wireless earbuds competition.