Anyone who has played a Pokémon game at least once would have encountered a bug-type Pokémon or two. They are not necessarily the main companion type because of their low base stat, but having one in your team would take you through the game. With abilities like status ailments, speed disrupts, and defense buffs, you’ll want at least one of these with you in Pokémon Go. To help you decide on which to pick, we present you 13 of the best bug-type Pokémon!

What Is a Bug Type Pokémon?

Before we start, what exactly are bug Pokémon? Out of the 18 Pokémon types eventually introduced to all the Pokémon games, bug types are the sixth most common type. Bug-type Pokémon are usually based on real-life bugs, and so are quick to evolve. It means that most evolve long before level thirty in other games. For Pokémon Go, however, this trait is a little suppressed. This is due to some evolutions taking up 50 to 100 candies for some of the stronger evolutions.

Other things to note for bug-type Pokémon are its offensive moves. Many of the best bug-type Pokémon have attacks that slow the enemy down, or give status afflictions like paralyzed, sleep, and confusion. However, bug-type attacks are resisted by fairy, fighting, fire, flying, ghost, poison, and steel-type Pokémon. They receive only half of the supposed attack value. Aside from that, bug Pokémon are weak only to flying, rock, and fire pokémon but are resistant to fighting, ground, and grass-type Pokémon.

The Pokémon on this list, as well as other bug-type Pokémon, can easily be found in places where you can also find the grass types. These places are usually farmlands, woodlands, forests, public parks and gardens, nature reserves, golf courses, and playgrounds. Let’s move on to the list of the best bug-type Pokémon.

The first Pokémon on this list is a bit of a rare one as it is a continent exclusive. Wild Heracross will only appear in South America, Latin America, Southern Florida, and Texas regions of the Americas. Aside from that, Heracross is a Bug-Fighting dual-type Pokémon. While it gives advantages against normal Pokémon, this typing does make it doubly weak to flying-type Pokémon and adds a weakness to psychic and fairy types.

A Pokémon from the second generation, Heracross is the best bug type Pokémon in Pokémon Go that’s been implemented so far. There is a chance that future updates will enable Heracross to do as it did in the main series games and mega evolve into Mega Heracross using Heracronite.

A bug and steel-type Pokémon, Scizor’s secondary type removes all but one of its vulnerabilities. This single vulnerability is quite bad, though, as the combined bug-steel typing makes it doubly weak to fire-type damage. In return, it makes it resistant to normal, bug, steel, psychic, ice, dragon, fairy, poison, and grass-type attacks.

Scizor is another second-generation Pokémon from the Johto region. You can get one of these 3,393 Max CP powerhouses by first catching a Scyther and then evolving it using 50 candies and a metal coat item. Its previous evolution, Scyther, is a strong Pokémon by itself, and you’ll find it a bit lower on this list.

The first pure bug Pokémon on this list, Pinsir is based on a stag beetle due to the pincer-like protrusions on its head. As a pure bug type, Pinsir has the usual flying, rock, and fire damage weaknesses. It also keeps its resistance to fighting, ground, and grass-type damage. Although it is a bug-type Pokémon, it does have a mix of normal, fighting, and bug-type moves to choose from in Pokemon Go.

A second-generation Pokémon that originated from the Johto region, Pinsir was originally a counterpart to both Scyther and Heracross in the original Gold, Silver, and Crystal games’ bug catching contest. Out of the three, it is the only one to not yet have an evolution.

Yanmega is a mix of bug and flying type Pokémon that has an odd quirk of being weak to attacks from its secondary type. It has double the weakness to rock type attacks while having normal weaknesses to flying, fire, electric, and ice type damage. Although it’s a dual-type Pokémon, it doesn’t have that wide a selection of attacks and is limited to flying, flying, and rock-type moves like Wing Attack, Bug Bite, and Ancient Power.

A newer Pokémon from the fourth generation, Yanmega is an evolution of Yanma of the second generation. Those wanting to get a Yanmega should use a Sinnoh Stone with 100 candies to evolve a Yanma to get one.

Similar to Scizor, Escavalier is also a mix of bug and steel Pokémon types. As with any other bug-steel Pokémon, it has no other weaknesses except for fire-type attacks. This typing also makes it resistant to normal, bug, steel, psychic, ice, dragon, fairy, poison, and grass-type. Although it is a bug-steel type, Escavalier’s moveset is quite versatile, with flying, rock, fighting, and poison-type attacks available.

A fifth-generation Pokémon from the Unova region, Escavalier is a first evolution Pokémon. Different from Yanmega and Scizor, those wanting an Escavalier only need to catch a Karrablast and feed it a whopping 200 candy to evolve it into Escavalier.

A rock-bug-type Pokémon, Armaldo has a surprisingly odd background according to its first appearance in the main Pokémon series games. Armaldo originally lived in ancient times and had died off long ago. Due to advantages in regeneration, Arnaldo was revived from prehistoric fossils. Aside from that bit of trivia, Armaldo’s dual type makes it resistant to normal and poison-type attacks. However, that same quality also makes it surprisingly vulnerable to rock-type damage as well as steel and water attacks.

Armaldo is a third-generation Pokémon that evolves from Anorith. Those wanting one of these Pokémon for their roster should catch an Anorith and use 50 candies to evolve it to Armaldo.

Scyther is the previous evolution of the bug-metal type Pokémon Scizor. Although it is a base Pokémon, Scyther’s Max CP of 3,060 is strong enough to be the seventh-best bug type Pokémon on this list. Similar to Yanmega, Scyther is doubly weak to rock-type attacks and normally weak to flying, fire, electric, and ice-type damage. It is also resistant to bug, fighting, grass, and ground-type attacks.

A first-generation Pokémon from the Kanto region, wild Scyther can usually be found in grasslands, forests, public parks and gardens, and playgrounds. If you do get a Scyther, don’t forget to grab a metal coat and save up 50 candies to evolve it to a Scizor as soon as possible!

A Pokémon with a fairly easy-to-understand name, Durant’s name is probably a combination of the words durable and ant. It is an interesting name, especially for a bug-steel type Pokémon. Its name highlights the “durable” part of its name due to its steel secondary type. As with any other dual bug-steel Pokémon, Durant’s only weakness is a fire-type attack. On the other hand, it has resistance to normal, bug, steel, psychic, ice, dragon, fairy, poison, and grass-type damage.

Durant is a fifth-generation Pokémon and hails from the Unova region. It currently has no other evolutions available, either in the main series games or in Pokémon Go.

The first bug-grass type Pokémon on this list, Leavanny is a Pokémon with a lot of weaknesses. Due to its dual types, Leavanny is doubly weak to both flying and fire-type attacks. Additionally, its dual-typing also makes it weak to poison, rock, bug, and ice type damage. Thankfully, Leavanny compensates on its resistances to electric and water moves, aside from the normal bug-type resistances.

The second evolution of Sewaddle, Leavanny is also part of the Unova region’s fifth generation. Those wanting a Leavanny would have to shell out a total of 125 candies. First, you’ll have to use 25 candies to evolve Sewaddle into a Swadloon. You then evolve Swadloon into Leavanny with 100 candies.

Although it looks more like a land crab than a bug, Crustle is a bug-rock dual-type Pokémon. Similar to Armaldo, Crustle is weak to rock, steel, and water-type attacks. It does, however, have resistance to normal and poison-type attacks. While it has strong bug-type moves like X-Scissor, Crustle’s strongest attacks are Smack Down and Rock Slide which are both rock-type moves.

A fifth-generation Pokémon from the Unova region, Crustle is the first evolution Pokémon of Dwebble. With a more than decent Max CP, you’ll want to get a Crustle by evolving Dwebble using 50 candies. 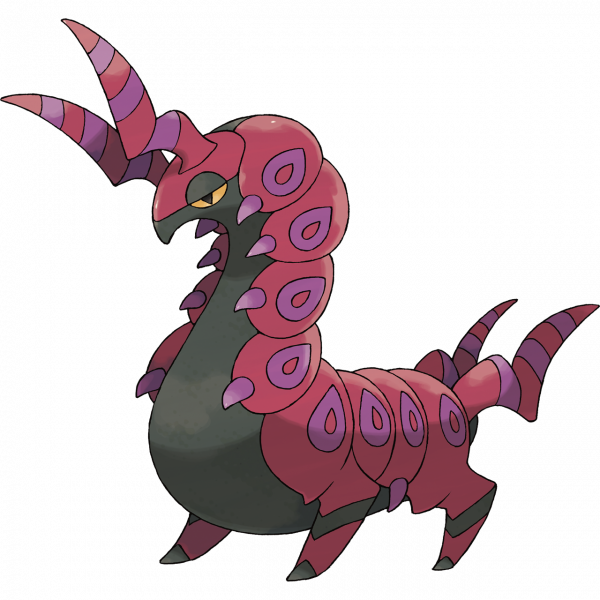 With a Max CP of 2,874, Scolipede is good enough for most trainers. Although it can’t go up against the strongest legendary Pokémon, its dual type of bug-poison gives it a lot of versatility. Scolipede has weaknesses to fire, fighting, flying, psychic, and rock-type attacks while having good resistance to bug, fairy, and poison-type attacks. It also has partial resistance to both fighting and grass attacks.

Scolipede is a secondary evolution of Venipede that is patterned after centipedes and millipedes. Completing the Venipede evolutionary line needs 125 candies. First, you’ll need to feed Venipede 25 candies to evolve it into Whirlipede. You then evolve Whirlipede into Scolipede using 100 candies.

Accelgor is the 12th bug-type Pokémon on this list due to its Max CP and stats. Although at first glance it looks like a poison Pokémon due to its ninja-like appearance, Accelgor is another pure bug-type Pokémon. While it doesn’t have poison as its secondary type, it can use Poison-type attacks like Acid and Acid Spray. It can also use the fighting type move Focus Blast, but its strongest attacks are still the bug-based Infestation and Bug Buzz.

Another Unova region Pokémon, Accelgor is the first and only evolution of Shelmet. Those wanting one for themselves should catch a Shelmet and feed it an eye-watering 200 candies to get an Accelgor.

Although it comes from the same Johto region as Yanma, Heracross, and Pinsir, Forretress first used the same Metal Coat evolution mechanic as Scyther in the main series games. Those wanting a Forretress on Pokémon Go, though, would only have to catch a Pineco and feed it 50 candies to make it evolve.

The Next Generation of the Best Bug Type Pokémon

And that finishes off our list of the 13 best bug-type Pokémon! Although this is only a small part of the available bug-type Pokémon in-game, we hope you’ve found one or two to add to your roster as you go on your training journey.

As we said earlier, though, this type of Pokémon is the sixth most populous in the series. Due to that, a lot of them haven’t been implemented in Pokémon Go yet. This list may change in the future depending on whether Niantic Labs or the Pokémon Go team will add more bug-type Pokémon.

Before you leave, you might want to diversify your Pokémon roster by taking a look at our other Pokémon type guides. We have quite a few of them, including one for the best flying type, the best electric type, the best fairy type, the best grass type, and the best poison type Pokémon.