Minecraft cat is one of the most adorable passive Minecraft mobs you can find in the game. In fact, fans even purchase Minecraft cat plushies because they can’t get enough of their cuteness. However, it takes more than just passion and love to tame a Minecraft cat. Intrigued? Here’s what you must know about obtaining, taming, and breeding Minecraft cats.

What Is the Importance of Minecraft Cat? 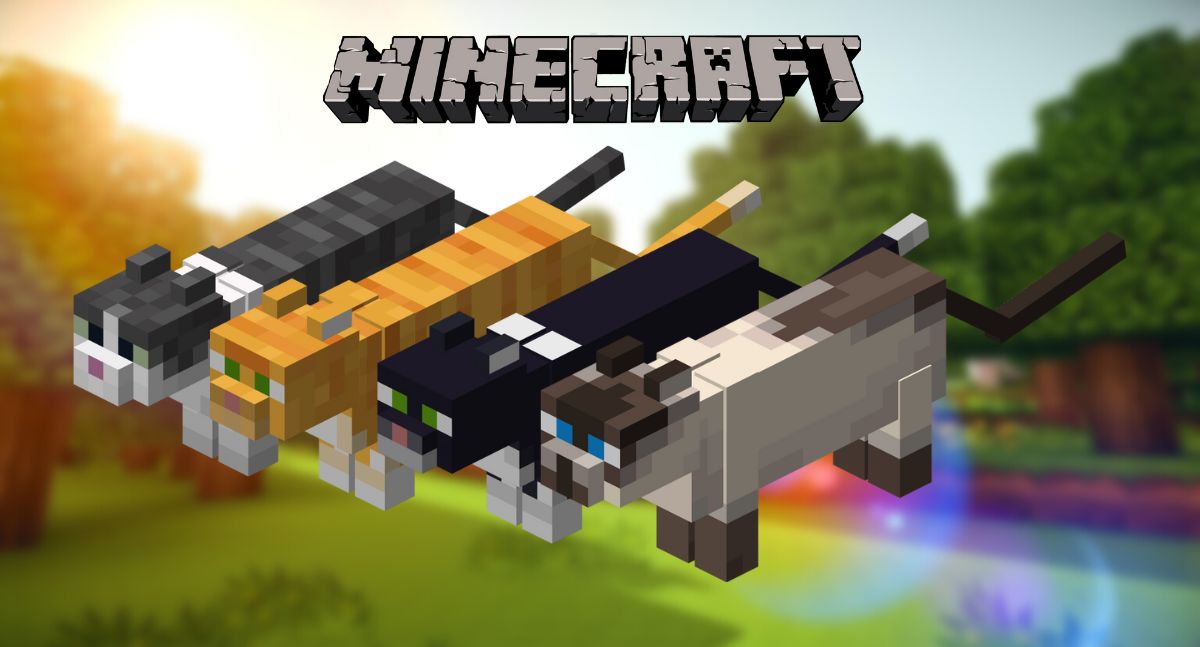 Like most animals in the game, the Minecraft cat serves several purposes that may be useful to players. Firstly, the most obvious reason cats are important is that they’re able to ward off creepers and phantoms. There’s no official reason as to why this happens apart from the game developers making it so. Nonetheless, it’s certainly a good mechanic to rely on if you’re trying to keep harmful mobs from attacking you. It’s especially handy if you like to wander at night mining for materials.

Apart from warding off unwanted mobs, the Minecraft cat has small behavioral patterns that could make them useful. For one thing, cats give gifts when the player is asleep. They can give you a rabbit’s foot or a rabbit’s hide.

Moreover, cats even bring rotten flesh, raw chicken, string, feathers, and phantom membranes. Hence, keeping a Minecraft cat — or several of them — with you isn’t a bad idea if you require these items. Minecraft cats are also cute and can keep you company when you’re lonely.

Finally, if you’re somewhat heartless, you can even kill adult cats to get one or two strings. They won’t attack back so they’re decent prey. However, the odds of getting strings from cats aren’t 100% so you may get none upon killing one.

Minecraft Cat Locations: Where to Find Them?

If you want to get a Minecraft cat, it’s important to learn where strays reside. Fortunately, these creatures are fairly abundant and aren’t particularly difficult to find. That’s because stray cats can spawn in villages and swamp huts. However, these locations must meet certain conditions for strays to spawn.

If you’d like to find a Minecraft cat in a village, the village must meet certain requirements. Firstly, the village must have at least five claimed beds and one villager to spawn a maximum of 10 cats. Keep in mind that the cats that spawn here won’t despawn if they first appear upon the village’s creation. However, the cats that spawn afterward may despawn anytime. Moreover, villages can only spawn a maximum of 10 cats.

In Bedrock Edition, on the other hand, villages spawn one stray cat for every four claimed beds. However, the maximum number of cats that can spawn here is five. Having more than 20 owned beds will be inconsequential to the number of cats that appear. Furthermore, the cats counted in the maximum of five include strays that wander in, kittens, and tamed cats from players.

If you’re tired of villages, you can also find a Minecraft cat within swamp huts. Upon generating the world, one stray cat always spawns alongside a witch — and it’s always black. Moreover, this cat can never despawn so you’re guaranteed that it’s there.

If you’re playing in Java Edition, the cats that spawn in the witch hut will always be black. This includes cats that spawn from eggs or special game commands. In addition, new cats don’t spawn in huts if there’s already an existing one within a certain block volume.

How to Get a Minecraft Cat?

Once you’ve located a Minecraft cat, taming the animal won’t be too difficult. Like other domesticable creatures, you need some items if you want to tame a cat. Refer to the table and guide below to get started.

Like the real thing, Minecraft cats respond to raw fish. More specifically, they like raw cod or raw salmon. If you’re lucky, one fish may be enough for the job. However, we do recommend carrying more than one because some cats take multiple feedings to tame.

How do you obtain these raw fish? Firstly, the most obvious way to get them is by going fishing. You can do this the usual way if you don’t have any special items. On the other hand, if you want to reduce the wait time, you can do so with a Lure enchantment.

However, we suggest that you don’t use a Luck of the Sea enchantment if you’re fishing for cod or salmon. That’s because this charm will increase your odds of finding treasure instead of fish.

Apart from fishing, you can also find raw fish in other places. For example, guardians and elder guardians may drop raw fish once you kill them. The same happens when you kill Polar bears. However, the likelihood of getting these drops isn’t 100%. Hence, you may need to try multiple times before getting the fish you want.

How to Tame a Minecraft Cat? 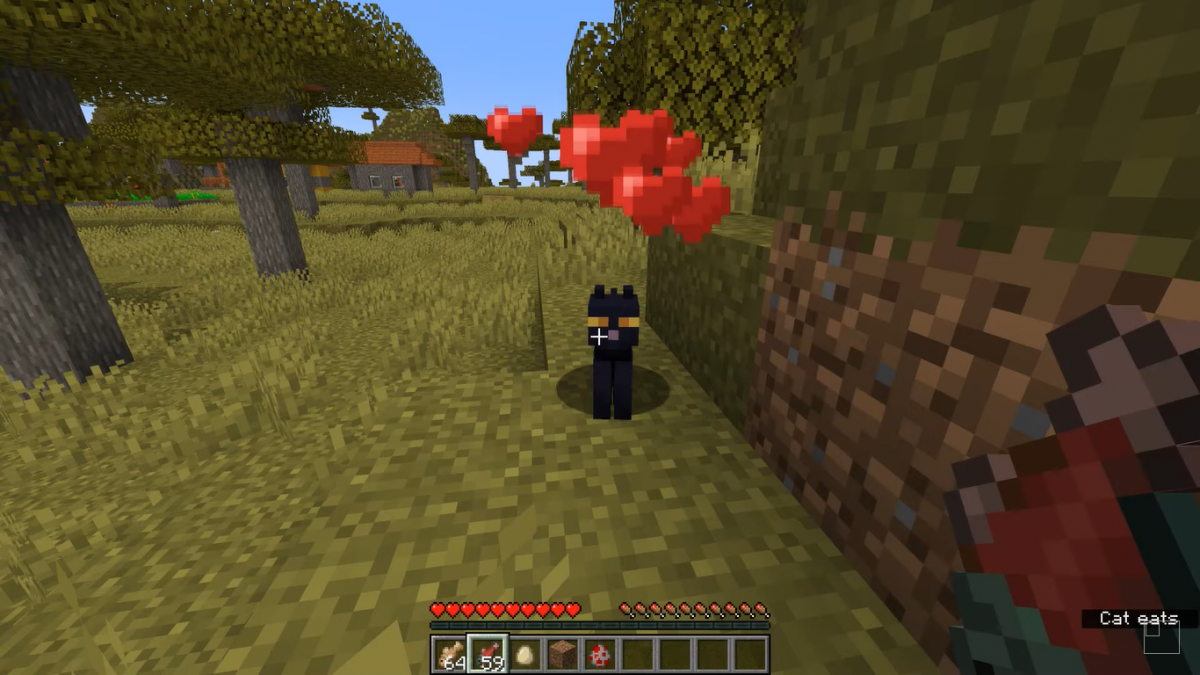 Unlike taming axolotls, domesticating a Minecraft cat requires a bit of patience and precision. That’s because, apart from holding raw fish in your hand, you must stay perfectly still. You cannot move your character or the camera too fast when approaching a cat.

This is because cats scare easily in Minecraft. They’ll run away from you if you make any sudden or quick movements if you’re within seven blocks. Cats also avoid players who appear within 16 blocks even if the player isn’t moving quickly.

Moreover, if you fail an attempt to tame a cat, it won’t try to approach you again for a while. With that said, you may need to try several times before you can lure a cat successfully.

It’s best to sneak instead of walk when trying to tame a Minecraft cat. While sneaking, hold a raw cod or salmon in your hand and slowly approach the animal. Once you’re within 10 blocks of it, they should slowly approach you.

If all goes well, hearts should appear above the cat, indicating you’ve tamed it successfully. At that point, it should have a collar to indicate that you’ve tamed it. Once it’s domesticated, it will no longer run from you. The cat will follow you around, purr, and even teleport to you if you’re a little far away.

How Do Minecraft Cats Behave?

Before you domesticate a Minecraft cat, it’s essential to understand how they behave. After all, learning their patterns is crucial to taming them successfully. Moreover, you wouldn’t want to have a tamed cat around if you find their behavior unhelpful. With that said, here’s what you must understand about their behavior.

Firstly, apart from staying away from players, untamed cats will attack other animals. These include chickens, baby turtles, and rabbits that are 15 blocks away. Moreover, while stray cats spawn in villages, they tend to wander around outside and explore like real cats.

On the other hand, if a cat is domesticated, the cat’s behavioral patterns will change slightly. It will still explore and wander around like a stray cat. However, it won’t walk too far and will remain around the player.

Moreover, domesticated cats will no longer attack other animals. They also tend to sit on specific furniture you build, making them a little annoying sometimes. More specifically, cats like to sit on top of chests, active furnaces, and the foot of beds.

Sitting on chests will make the chest unusable unless you get the cat off. You can do this by commanding it to stand, holding a raw fish in your hand, or attacking the cat. Alternatively, you can also remove the block or push it off.

Finally, cats tend to trap themselves in boats if you enter one. Hence, it’s best not to take them sailing unless you need the protection.

How to Breed Cats in Minecraft?

Like breeding horses, axolotl, and other animals, you can need a pair of tamed cats in possession for them to procreate. Afterward, breeding these cats shouldn’t be too difficult.

All it takes is to feed two cats some raw fish. Doing so will immediately trigger “love mode” so the cats are ready to mate. After a few moments, the cats should spawn a newborn kitten with a similar color pattern to its parents.

Now, you may think that breeding is unnecessary because one or two cats are enough. After all, these adorable things do have some bad habits like sitting on chests, making them unusable. However, breeding cats is crucial if you have multiple builds and locations.

This is because, as we have previously mentioned, cats can ward off creepers. Therefore, they’re great pets to keep around your property if you don’t want any unwanted visitors lurking around the premises.

What Are the Different Types of Cats in Minecraft?

There are eleven different Minecraft cat breeds within the game. Many of them resemble the design of real-life cat breeds, with similar colors and patterns. We’ve compiled a list of each cat species (and their descriptions) below.

In the game’s resource pack, you can find a file for a gray variant of Tabby. However, the developers decided not to use it so you cannot find it in the game. You cannot forcibly spawn the gray tabby even with a command.

In addition, while most of these cats are patterned after real breeds, they don’t behave in the same way. For example, you’re allowed to breed two Calico cats within the game even though it’s not achievable in real life.

Furthermore, not all of the cats on the list are based on distinct breeds. For instance, one of them was designed to look like Jellie, a real cat owned by the YouTuber named GoodTimesWithScar.

What Is the Rarest Minecraft Cat?

Some users report that the Siamese breed is difficult to get. However, every cat in the game technically has similar odds of spawning. Hence, no one cat is rarer than the others unless you count the unused Gray Tabby. Nonetheless, this Gray Tabby variant only exists in the game files and cannot be seen in Minecraft’s world.

Do Minecraft Cats Protect You?

Minecraft cats protect you from creepers and phantoms by keeping them away from you and your builds. However, they cannot fight for you in battles like other domesticated creatures. They cannot attack enemies you come across.

How Many Minecraft Cats Can You Own?

You can own as many Minecraft cats as you like. However, remember that there will still be a maximum number of cats allowed per village you visit. This includes strays and domesticated cats following the player.

In the past, tamed ocelots transform into cats in Minecraft. However, the developers have since changed this mechanic and ocelots are now an entirely separate mob from cats. Hence, you cannot tame an ocelot and turn it into a cat.

Taming a Minecraft cat can be incredibly fulfilling if you’re a fan of the game. Not only do these cute creatures boost your mood but they can also keep creepers and phantoms away. Hence, they make great companions and defense mechanisms for your builds. However, they are slightly trickier to tame than other animals so you may attempt it several times before succeeding.