Can’t pick between Amazon Music vs Spotify? We compare them side by side in this article, so you wouldn’t have to. With plenty of music streaming platforms available online, the competition is only getting fierce. And making a decision to settle on a music streaming service is harder than you expect. Hence, here’s the comparison that covers everything you need to know about Amazon music vs Spotify. By the end of the article, you should be able to identify which one has better service, a bigger library, and more value for money. 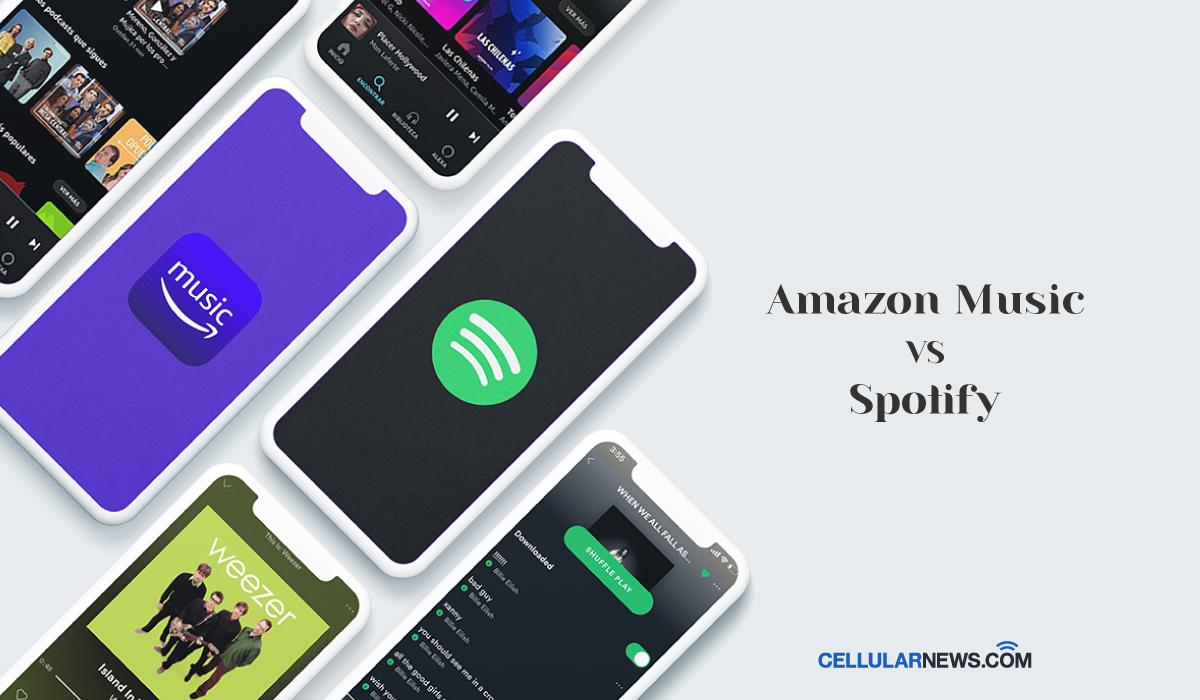 Spotify was the first music streaming giant to step foot into the market, and it was only in 2015 that Apple wanted a slice of the pie and take on Spotify by creating Apple Music. This was a paid music service built into their iOS. Months later, Amazon didn’t want to be left out and created a very similar service called Amazon Music. Now, Amazon is no stranger since it’s practically a one-stop platform where you’ll possibly get everything you ever wished for.

At a glance, Amazon Music and Spotify may seem very similar services, but each of them has some unique features that may sway you to either side.

What Is Amazon Music?

You can download the Amazon Music App or go directly to music.amazon.com and you can start browsing their playlist. You can also access Amazon Music through Alexa by saying “Alexa, play The Best of Prime Music playlist.”

Prime Music is available on all Amazon Echo family devices compatible with FireTV, Fire Tablet, and many other Alexa-enabled devices. That means you can stream any music on your mobile phone or computer. There are different playlists available, ranging from Billboard Top 100 to workout music down to dinner party music.

Spotify is believed to be the most downloaded music streaming app. In fact, 99 out of 100 people have Spotify downloaded on their mobile. But why is it so popular?

Spotify is a digital music streaming platform that lets you access millions of songs, podcasts, and videos from artists and content creators all over the world. It does not limit to mainstream artists as it also gives indie musicians a platform.

There are two ways to access Spotify: you can either download their music app on your mobile phone or you can access it via the browser on your PC. Alternatively, you can also download the Spotify App on Windows and macOS. If you want to sign up for Spotify, you can choose between their different subscription levels, which we’ll be shown in the next section.

Once your account is all set, you can freely browse their music library, playlists, and podcasts.

How Much Is Amazon Music Unlimited?

Amazon also has an actual free music streaming service, which levels the playing field between Amazon Music vs Spotify. However, it is ad-supported and users can’t pick specific titles to play.

How Much Is Spotify?

Spotify has a simpler pricing structure at five tiers: free tier, individual, duo, student, and family account. The individual account costs $9.99 per month and gives you ad-free and offline play music streaming (something not available to free accounts). There’s also a duo account for $12.99 monthly and a family subscription plan for $15.99 a month that lets you and five other members enjoy premium features. Each member gets their own personal account through one payment.

How Much Data Does Spotify Use?

If you’re using the default setting, you’re averaging 2 MB+ on data usage for 3-minute songs. That puts you at about 40 MB per hour or half a gigabyte every 10 hours. This is important because some cellphone plans have limited data allotment, so you’ll need to monitor your data usage through Spotify. The data usage also depends on music quality. The lower the quality, the lesser the data usage. You can find out the quality setting by going to Your Library, Settings, and then Music Quality.

Spotify has several audio quality settings and these are the data usage expected. We discussed this in detail in our Spotify data consumption article.

How Much Data Does Amazon Music Use?

Amazon never officially revealed the streaming quality of its music service for both Prime Music and Amazon Music Unlimited. The general consensus online ranges between 48kbps and 320kbps, depending on streaming quality.

On the low end, you’re probably averaging about 175 MB per hour to 1.2 GB on the high-quality end. Amazon Prime sets the quality at 96Kbps, but you can opt for higher-quality streaming on their settings.

Amazon Music vs Spotify: Which Has More Music?

Both Amazon Music and Spotify have about 100 million tracks, not counting podcasts. However, Spotify might have more music by a few hundred or thousands due to the fact that a lot of indie musicians and up-and-coming artists are launching their music on the platform compared to Amazon Prime.

Now it’s no surprise that Spotify has 100 million paid subscribers out of their 217 million active users, but Amazon isn’t left out in the dust either. As of December 2022, Amazon Music has an estimated 68 million active users worldwide. The platform’s count doubled from 32 million in 2019.

Amazon’s Echo Speaker gives Amazon Music an advantage over Spotify since it’s now reaching out to households as opposed to individual users. The company is now working on a higher-fidelity version of the Echo which is built to compete against the likes of the Sonos speakers and may attract more users to the streaming services. Amazon Music also has a strong user base of older subscribers, averaging about 14 percent aged 55 years or older while Spotify falls far below 5% for users aged 55 and over.

Spotify and Amazon Music can both be accessed via your mobile devices, tablets, PC, and Mac OS. For Android and iOS devices, you can download both of their apps from the Google Play Store and Apple Store respectively. You can also sign up for subscriptions through the apps.

Spotify also allows you to enjoy Spotify Connect, which is a feature available to premium subscribers who want to stream directly on their TV’s and speakers. It’s quite a popular option for many AV and Hi-Fi products including Sonos Speakers. Spotify is also compatible with Alexa and Google Assistant and you can access them by saying “Spotify” when prompted.

Amazon Music is exclusively available for Fire tablets and Fire TV’s, and some BMW and Mini in-car entertainment systems, as well as Sonos Wireless Speakers and Bluesound and NAD BluOS devices. As expected, you can also stream Amazon through Echo devices but not through Google Assistant (given their past relationship, it’s no surprise).

You can access Radio stations on both Amazon Music and Spotify. There are also personalized radio stations based on the artists and tracks that you like. They also have mood-based playlists and auto-generated radio stations that allow you to switch from one station to the next. The radio stations can be accessed through Echo devices as well.

Amazon Music and Spotify will let you create customized playlists that you can share with your friends and to the public. Likewise, you can also curate other playlists from existing members and download them on your mobile device. However, Spotify has a more user-friendly approach to their playlists and they make it easy for you to add and remove tracks on your own playlist. You’ll also be able to follow certain playlists if you want to be constantly updated on changes made to that playlists.

Integration with Echo Devices makes it easy to stream Amazon Music through Alexa. Once prompted, you can instruct Alexa to play music via their command code and then certain keywords. Spotify doesn’t have any supported or built-in assistants but can be controlled by either Alexa or Google Assistant.

Amazon Music and Spotify both offer offline playback where you have to download the tracks to your phone. This allows you to enjoy music on the go without worrying about consuming mobile data however, you’d need to be subscribed to their premium tier if you want to enjoy this feature. Both will allow you to download entire playlists as long as there’s enough space on your phone.

What Does Spotify Have That Amazon Music Doesn’t?

Spotify’s main unique value proposition that Amazon Music doesn’t have is its music recommendation feature. It doesn’t come any close to what Amazon Music has for it. They have a Discover Weekly feature that uses their patented AI and machine learning algorithm that curates a playlist for you based on the latest songs you’ve played and based on your listening habits. These recommendations are 90% accurate so you won’t have to worry about editing this curated list. They also have a two-hour Release Radar playlist that contains brand-new music and remixes, and the more you listen to these libraries, the more recommendations will be matched to you.

What Does Amazon Have That Spotify Doesn’t?

Amazon launched Amazon Music HD, which has 100 million HD tracks at CD-quality bitrate of 16-bit/44.1 kHz and millions more along with 24-bit quality and up to 192kHz (which Amazon scales to as Ultra HD). In comparison to standard streaming services, Amazon through Amazon Music Unlimted provides an immersive audio format and will automatically play music with the best audio quality even on Android or iPhone.

The Verdict: Amazon Music vs Spotify, Which One Is the Best?

This really depends on your preferences. Spotify is the most recognizable name in music streaming and will continue to be one for the next few years. Accessing 100 million songs for both free and paid users is not something that a lot of people just can’t look away from. But if you’re on the lookout for the freshest beats and the dopest tracks, Spotify may be your platform.

We recommend Amazon Music for those who want a bundled plan of music and video-on-demand service as you can get them in single payment through Amazon Prime. You can also get Amazon Music Unlimited on top of your Prime membership for a better audio experience.

All in all, you can’t go wrong with choosing either of the two. Spotify and Amazon Music are more likely to go head to head over the next few years and one of them is bound to surpass the other. It’s just a matter of which one will it be.