You would typically want to kill zombies in Minecraft for extra experience points and items, but what about zombie villagers? It is perfectly okay to kill them – you will also get XPs and rotten flesh plus an iron ingot, carrot, or potato when you do so. However, zombie villagers are also curable, and it is more beneficial if you could convert them back to normal villagers instead. In this article, you will learn how to cure a zombie villager in Minecraft, so you can trade with the turned villager or breed them again.

Related: How to Breed Villagers in Minecraft

What Are Zombie Villagers in Minecraft

Zombie villagers are a type of zombie and a hostile mob in Minecraft. There is a chance that they spawn in a normal spawn cycle, but depending on the game’s difficulty, there is a greater chance for a villager to transform into one when they are killed by any type of zombie. In easy mode, an infected villager may turn into a zombie by 0%. This chance increases to 50% and 100% when playing under normal and hard difficulty, respectively.

Regardless of the type, zombie villagers are dangerous and tend to attack other villagers and players at nightfall.

Curing zombie villagers seems easy. After all, there are only two items you need: a Splash Potion of Weakness and a Golden Apple. However, obtaining these items can be a chore if you do not have them already.

1. How to Make Splash Potion of Weakness?

A Splash Potion of Weakness is a primary material for converting a zombie villager into a normal villager. Throwing this item adds a debuff effect to the hostile creature. You will need blaze powder, 3x water bottles, a fermented spider eye, gunpowder, and a brewing stand to make a Splash Potion of Weakness. Once you have all the materials, follow the steps below:

2. How to Make a Golden Apple?

Golden Apple is a valuable food item in Minecraft that has several beneficial effects when consumed, including curing a zombie villager. You may find this inside the chests in mineshafts, dungeons, ruins, and the Woodland Mansion. You can also craft it on a crafting table using an apple and 8x gold ingots. Follow the steps below to make a Golden Apple:

How to Cure a Zombie Villager? 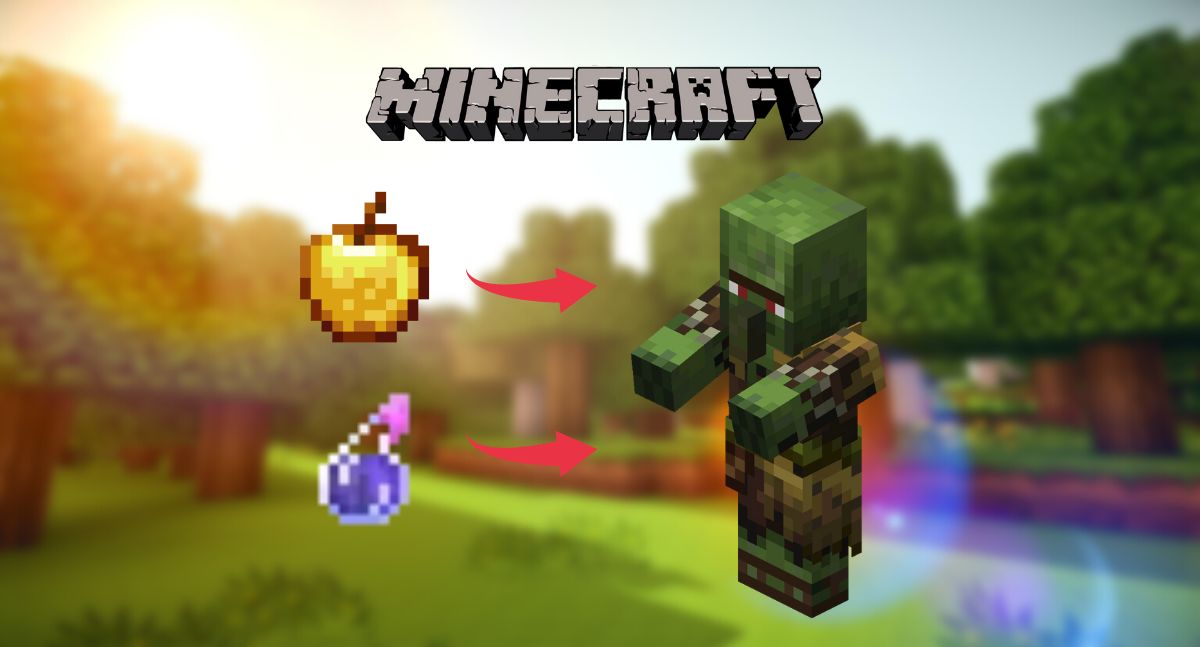 Finally, how to cure a zombie villager? As soon as you have the Splash Potion of Weakness and a Golden Apple, put them inside your Hotbar so you will have them within reach when a zombie villager appears.

Immediately after a zombie villager spawns, throw a Splash Potion of Weakness at it to weaken it. Green circles should also start coming off of it.

Afterward, feed the zombie villager with the Golden Apple. At this point, it should start shaking and the green circles that it releases should turn red. Wait a little bit more until it turns into a regular villager.

What Will Happen When You Cure Zombie Villagers

What exactly is the point of curing a zombie villager in Minecraft and what does it entail for the zombified villager? It may vary according to the Minecraft version you are playing, but here are the things that will happen to a zombie villager after curing them.

Part of learning how to cure a zombie villager are the benefits that await you when you pull it off correctly. Other than giving life to the lifeless, there are many perks to curing a zombie villager.

Where to Find Zombie Villagers?

You can typically find a zombie villager trapped inside an igloo, which naturally generates snowy biomes. This structure also has the items you need – the potion of weakness and a golden apple – so it is safe to say that this is the most convenient way of ripping off the benefits of curing a zombie villager.

What if you cannot find an igloo? It may sound cruel, but you can just let a zombie attack a villager and turn it into a zombie villager. To do this, you can trap a villager in a boat and let a zombie attack it at night. Make sure to also switch the game difficulty to hard so that there is a 100% chance that the villager will turn into a zombie. Afterward, cure the zombie as you should and get the rewards.

How long do zombie villagers take to cure?

In Minecraft Bedrock Edition, a zombie villager usually takes two minutes to transform into a regular villager, while Java Edition takes three to five minutes. It may decrease if there are cure accelerants (iron bar or a bed) surrounding the zombie villagers.

How do you cure a zombie villager without a potion?

You cannot cure a zombie villager without a Potion of Weakness. It is an integral part of the minigame, so you cannot skip it.

Do zombie villagers attack during the day?

Zombie villagers, like normal Zombies, burn in sunlight, so they won’t attack in a broad daylight. That said, they may attack players and other villagers when they are underground where there is no sunlight.

Whether you are doing it out of your good desire of giving zombie villagers a second chance or you just want the trade discount that comes along with it, curing zombie villagers is a minigame that you should know how to play. You don’t have to kill them right away, especially those that have trading experience. Curing them will help you build a successful village!

How to Get Sound on Reddit Videos in App/Browser