You can add Spotify widgets on both iOS and Android, which is a great feature if you want to skip launching the app every time you want to play music. Using this tool, a small window will appear on your home screen that will allow you to play, skip, and pause Spotify. Whether you are on Spotify Premium or on a free account, the platform will have a default widget that comes along when you install the app on your phone. However, there are other ways how to add Spotify widgets to your home screen.

While the app does have a pretty good user interface (UI), there is a better way to control your music. This is through adding control widgets to your home screen, which we will tell you all about!

Related: How to See Lyrics on Spotify

When Did Spotify Widgets Appear On iOS and Android?

Google first introduced widgets for Android in 2011 when they released Android Ice Cream Sandwich (or Android 4.0). These are fun, quirky mini-apps that sat on your home screen and can control or present information on the apps they are connected to. Android phones normally come with a pre-installed calendar, clock, and weather widgets, too. They will eventually pile up as you install more apps that have widgets, like Spotify.

Taking advantage of this feature, Spotify had a slightly buggy widget you could use that they tried to pull out in 2019. Due to customer complaints, however, Spotify brought the widgets back but has mostly done nothing to improve them.

This was the case until 2021 when Apple announced they would introduce widgets to iOS 14’s home screens. Along with other companies and apps, Spotify also jumped on this opportunity by releasing an iOS widget of their own. A year later, Spotify has since revamped its Android widget version to streamline its look with the iOS version.

Also read: How to Add and Customize iPhone Widgets

What Can You Do With the Spotify Widget?

As we said earlier, Spotify widgets let you control the functions of the Spotify app, including the Spotify playlists you made. This means that not only can you use the widget to play, pause, skip forward, or skip back to previous songs or podcasts you were listening to, but you can also see the information on what you are listening to. These are its features on the Android version, at least.

Possibly due to how new the feature is to iOS users, their version of the widget is a little bare-bones. iOS users can only see the picture and information of their favorite and previous tracks through the widget. The iOS version does share the Android widget’s shortcut feature where you can click on it to bring up the full Spotify app UI, though.

How to Add Spotify Widgets

Now that you know a little bit about the history of Spotify widgets and what they are for, let us talk about how to get them on your home screens. There are two main ways to get a Spotify widget on your screen. The first of which is to download the iOS or Android Spotify app, and the second is to get a third-party home screen widget that can connect to the Spotify app. We will explain how to get the widgets on iOS and Android while giving a shortlist of third-party apps you can choose from.

Spotify’s default iPhone widget will show you the recent tracks you have played. To add Spotify widgets to your home screen on iOS 15, you just need to do the following:

1. Long press an empty part of your iPhone’s home screen.

2. Wait for the home screen edit icons to appear. Click the “+” on the upper right corner.

3. Scroll down the pop-up menu to find the Spotify tab or use the search box to look for it. Select it.

4. Choose between the 2×2 or 2×8 widget sizes by swiping left or right. Press the “Add Widget” button once you have chosen the size you want.

This guide on how to add Spotify widgets to an iPhone home screen has been tested to work on an iPhone running iOS 15.4.

On Android, the Spotify widget will show you the play and skip buttons as well as the art cover of tracks. To add Spotify widgets to your home screen on Android, you just need to do the following:

1. Long press an empty part of your iPhone’s home screen.

2. Wait for the home screen edit icons to appear. Click on the “Widgets” icon to bring up the menu.

3. Scroll through the ribbon menu to find the Spotify widgets, then select the size you want.

4. It will automatically fill a blank spot on your home screen. You can drag and drop the widget to other places on your screen. When long-pressing the widget, you can also change its size and shape to fit your screen better.

This guide on how to add Spotify widgets to an Android home screen has been tested to work on an Android phone running Android 11. Older versions of Android that support widgets have a similar way of adding widgets to their home screens.

Since you now know how to add the official Spotify widgets to your phone’s home screen, let us talk about alternative ones now. You may want to choose these widgets instead of the sometimes buggy official widget for your home screen. Do remember that these third-party apps are not officially sanctioned by Spotify, and letting them integrate with your account may be dangerous due to security problems.

The first Spotify widget app alternative we have, Sign – Homescreen Widget for Spotify, is a pretty well-rounded app. It lets users connect their Spotify accounts (Premium or free) to create shortcut widgets to their favorite tracks or entire playlists. This app also lets users tack on these shortcuts to the notification ribbon aside from normal home screen widgets.

Get Sign Homescreen Widget for Spotify on the Google Play Store

Another Spotify widget alternative for Androids, Audio Widget Pack works not just for Spotify; it also works for Google Music and Samsung Music. Created by the same person behind the Stellio Player, the Audio Widget Pack has a pretty sleek-looking widget. It gives you everything you need to control your Spotify tracks right on your home screen. It also has multiple widget designs, which you can mix and match with your wallpaper.

Get Audio Widget Pack on the Google Play Store

Before Spotify released its own widget for iOS, TuneTrack already released its own to work with the Spotify app. Aside from giving playback controls to iOS users, TuneTrack also has a few additional features. These include Spotify play data, music charts, and other on-demand statistics. It also works for Apple Music and Last.fm accounts as well.

Get TuneTrack on the Apple App Store

A simple widget that connects with Apple Music and Spotify apps, WidgetPod lets you have much-needed playback controls for your Spotify app without any hassles. Aside from its basic functions, WidgetPod also lets you customize its widgets a little by choosing their size and picking either the light or dark themes for them.

Get WidgetPod on the Apple App Store

Get MusicView on the Apple App Store

How to Remove Spotify Widgets

If you think the Spotify widget makes your home screen cramped, you can remove it anytime to tidy up your phone. Removing widgets couldn’t get any easier and would only take a few taps. 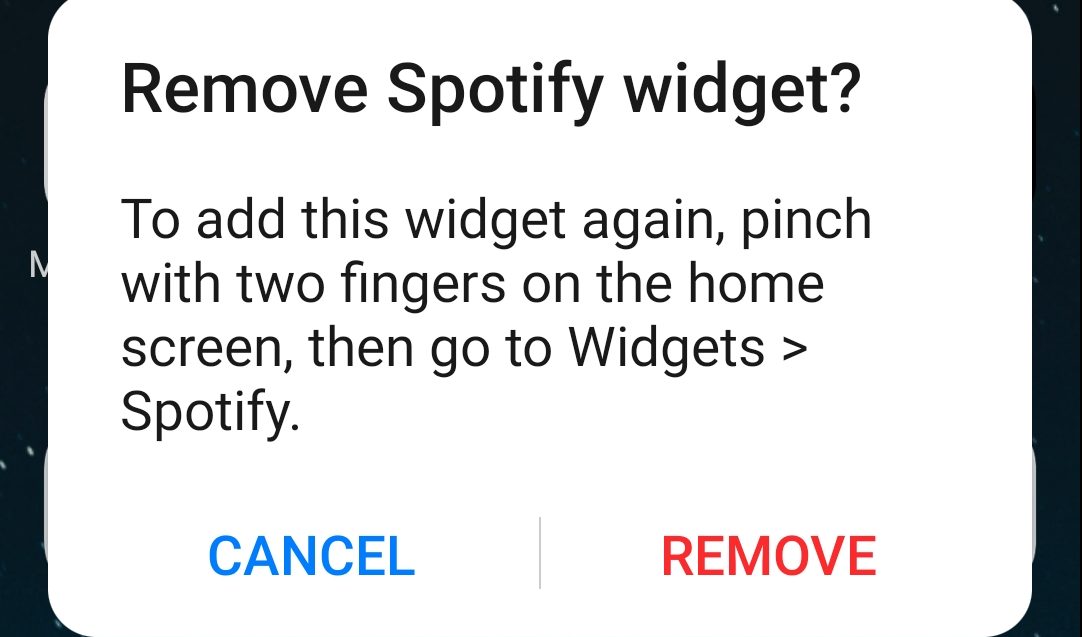 On Android phones, just touch and hold the Spotify widget until the remove option appears. Click on it and select Remove if a confirmation dialogue pops up.

Removing a Spotify widget on an iPhone works similarly. Touch and hold the widget, select Remove stack from the options that will appear, then select Confirm.

There you have it — we hope you now know how to add Spotify widgets to iPhone and Android devices. What is good music if you can’t hear them properly, though? Those that want the best music experience should snag some of the best open-backed headphones to go with their listening binge. If you want to explore more about widgets, you might find battery widgets a helpful addition to your home screen to keep track of your battery health while jamming with your favorite music.