Facebook has always pushed the boundaries of its platform and adapted the technology for its users by creating Facebook Touch during one of these pushes. While many would eventually use the Facebook app on their iOS or Android phones, Facebook Touch continues to have a niche user base. Why is that and what does Facebook Touch offer? Fret not as we are here to answer that and a few other questions!

So, what exactly is Facebook Touch? Well, it is now a pretty old feature of Facebook since it was originally released in 2009. This version of Facebook was made specifically as the platform’s main web browser website for the relatively new and growing fad in tablet, smartphone, and other touchscreen devices.

Due to being created using the then-new (released in 2008) HTML5 or H5 markup language, it provided more options and features than the previous versions of Facebook. This means that Facebook Touch (https://touch.facebook.com/) is an upgraded and optimized version of the platform compared to the old Facebook mobile website (https://m.facebook.com/). Due to this technological upgrade, it is also a faster, smoother, more visually detailed, and less Internet-intensive alternative to the sometimes bulky Facebook apps. 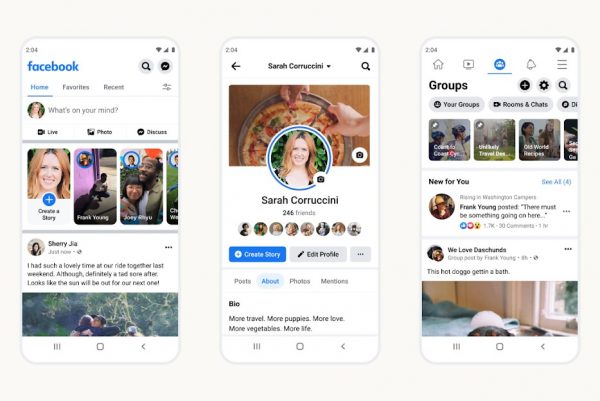 What were Touch’s main features, you might ask? That’s easy. As we said earlier, this service is basically a better and improved version of the normal Facebook webpage (www.facebook.com) and the mobile Facebook page. There are, of course, reasons why Touch is better than the normal mobile or non-mobile webpage for those on touchscreen devices. Those reasons are the following:

Quite similar to the mobile webpage and the Facebook apps, Touch’s interface is also streamlined for touchscreen use. This means there are no big and clunky buttons, annoying cut-off pictures, or anything else that would ruin your experience. It can even be enhanced by removing the usual menu and button ribbons on your phone to allow Facebook Touch to fill up your entire screen!

The best part about Facebook Touch is that compared to the mobile webpage and the apps, using it is a lot less hassling for those with a slow Internet connection. Due to the way H5 is programmed, it means that not only are pictures, videos, and other media loaded into your Internet browser faster; they will pull less data consumption as well due to Touch’s touchscreen optimization.

Aside from the lowered Internet needs compared to the mobile webpage, Facebook Touch has the ability to load better media. Rather than the grainy and pixelated mess you sometimes get, Touch will load up better versions of videos, pictures, and other media. But, do remember that it cannot improve the quality of media above what was originally posted.

Since Facebook Touch is a web page-based service, it will run on whatever Internet browser your phone is using. This means it can run on any browsing app like the pre-installed Android app Google Chrome or the protected Avast Secure Browser.

Compared to the many FB apps, including FB Lite, FB Touch gives users a way to access their account without worrying too much about their apps eating too much RAM, memory, or battery power.

As we said earlier, Facebook Touch is not an app but a webpage. But, it can be troublesome if you have to enter its web address every time you want to use the platform. Thankfully, you can add it on your phone’s home screen as if it’s an app. For those that want to have a shortcut to the webpage on their home screen instead of just a bookmark in their web browser, you can do the following:

Note: We tested this to work with Google Chrome and Mozilla Firefox. The process should be similar to other web browser applications.

So, we have told you all about the benefits of Touch, but is it any better? The answer to that is a yes and a no. It all depends on what you need and what smartphone you are using. To explain it, we will compare Touch to its smartphone alternatives, the apps and the mobile website.

While Touch loads the website faster and uses a lot less RAM, memory, and Internet bandwidth as compared to the native Facebook app, Touch is a lot less secure compared to it. This is mostly due to it being a web-based page that needs a third-party web browser to run.

Aside from this potential problem, though, we consider it as a decent alternative to those whose phones cannot run the Facebook app.

When compared to Facebook’s mobile webpage, Touch uses a lot fewer phone resources to access your account as both are web browser accessed. Second, Touch was made to be an upgrade to mobile as a whole and does this wonderfully with its better quality media. And third, the issue of security is the same since both require a third-party web browser and use the same TLS 1.3 encryption.

Overall, we do not see why we would prefer the inferior mobile page compared to the better and more optimized Facebook Touch page when using a smartphone. This is especially true if you do not want to use the Facebook app or if your phone cannot install it. For those that do have the app installed and do not mind the added system load it gives, you should stick with that and use Touch only when the app malfunctions.