In offices and workplaces, assistants are traditionally people who help you with tasks and perform administrative duties. With the innovations in technology, anyone today can have an assistant without hiring anyone. All you need is an iPhone and an internet connection, and you’ll have access to Siri, one of the most popular virtual assistants.

So who is Siri, and how does she work? What are the things that she can help you with? Here’s what you need to know about virtual assistants, particularly Apple’s Siri.

What Are Virtual Assistants?

You have definitely heard people speaking to their iPhones and saying things like, “Siri, what’s the weather forecast for today?” or “Siri, when is the next New England Patriots game?” This is how virtual assistants are controlled.

A virtual assistant is an application that can understand voice commands and carries out tasks for the user. It uses artificial intelligence (AI) technology to do this. Virtual assistants are available for smartphones, tablets, computers, and standalone devices.

Some tasks that can be completed by virtual assistants include looking up phone numbers, making phone calls, scheduling appointments, reading emails and texts aloud, and looking up information on the web. Of course, they are not limited to these tasks, but this will be elaborated in the succeeding paragraphs.

Siri is Apple’s built-in, voice-controlled assistant that is available on all Apple devices. The point of using Siri is to stay connected without having to lift a finger. For example, you can make calls and send texts while you’re driving or if your hands are full. The Siri personal assistant app also reminds you about appointments, meetings, and events.

If you speak a language other than English, fear not! Siri can speak and understand other languages. This includes Spanish, Russian, French, German, Italian, Korean, Japanese, Mandarin, Cantonese, Thai, Danish, Portuguese, Dutch, Turkish, and Norwegian. Siri can also understand other English variations for US, UK, Australia, Canada, India, New Zealand, and Singapore.

And since we refer to Siri as a ‘she’, did you know that you can also change Siri’s gender and accent? You can configure using Siri as a man or a woman in the Settings of your Apple device.

Basically, using Siri is like having your own personal assistant, but with lesser hassle and more productivity. You can take it anywhere with you and command it at any time of the day.

How Does Siri Work?

Since Siri is voice-controlled, all you have to do is speak to your device and voice out your command audibly. Simply say, “Hey Siri” to your iPhone, iPad, AirPods, or Apple Watch. You can also start Siri by holding the Home or wake button.

You can then command Siri anything you want. Siri has access to the apps on your device as well as the Siri database so she can carry out the commands. For example, if you ask her for directions to a particular location, she will open your Maps and provide you the information. Or if you ask her to call someone, she will open the Phone app and place the call.

Looking at how Siri works can be concluded through two types of technologies: Speech Recognition and Natural Language Processing (NLP), which is a branch of AI. Speech Recognition converts human speech into a textual form. Thus, when you speak to Siri, you’ll notice that your command gets typed on the screen.

NLP helps computers understand and manipulate human language. Once the command is converted to text, the NLP algorithms try to understand the meaning of the command. This is why it’s important to voice out audible, simple, and concise commands so Siri can process it faster.

What Can Siri Do?

Tons. The beauty of a virtual assistant like Apple Siri is it helps you with any task you need to do. Siri can help you perform mundane daily tasks without having to touch your phone. You can set alarms, reminders, and timers. She can help you set appointments on your calendar and remind you about it as well.

If you’re a music lover, then Siri can help you pick out any music you like (and she’s a great DJ as well). Since she has access to your Music app, you can ask her to play a song, put on your favorite album, ask questions about bands you like, or purchase music. She can also recommend playlists that you might like listening to.

Additionally, you can command Siri to control your smart home. Using the Home app, Siri can carry out tasks such as turning your smart appliances on and off, switching the lights, unlocking the door, adjusting the thermostat, controlling the TV volume, and many others.

Need to fact-check a piece of information? Just ask iPhone Siri to search for it in Safari. You can also command her to do calculations, translate a phrase, or provide news whenever you need it. Whether you need to purchase an item, search for files in your phone, or book a ride, Siri can do it using a few simple commands.

What Is The Future Of Virtual Assistants?

Virtual assistants like Siri prove to be extremely useful for people who are on the go. Without having to touch your phone, you can perform several tasks through voice commands. It’s a great tool for multi-tasking, staying connected, and ultimately making life easier.

The number of virtual assistants being developed and improved today is increasing. Software engineers are delving deep into learning Artificial Intelligence, Machine Learning, and Natural Language Processing. Additionally, companies are also investing more into this technology since it is well-received by users.

In the future, we can expect virtual assistants that can do more tasks other than the ones they are capable of today. Since it’s conception, Siri has also received several bad reviews saying that the results aren’t always accurate. Thus, better voice recognition and speech understanding is also expected.

Plenty of users have voiced out their concerns regarding privacy issues with virtual assistants. It’s because these programs have access to the entire device, requires a huge amount of personal data, and the fact that they are constantly listening for commands.

It’s important to remember that virtual assistants have access to your contacts, emails, photos, location, web history, calls, texts, and plenty of other information. Therefore, if you’re concerned about your privacy, this can be configured as well. You can limit the access of the virtual assistant on your device. However, this will mean that it will become less efficient and useful.

Siri artificial intelligence relies on the storage of your personal data to improve user experience. You can review the privacy policy of the company that the virtual assistant is under.

Aside from Siri, there are also different virtual assistants that are built-in to specific devices. These include the following: 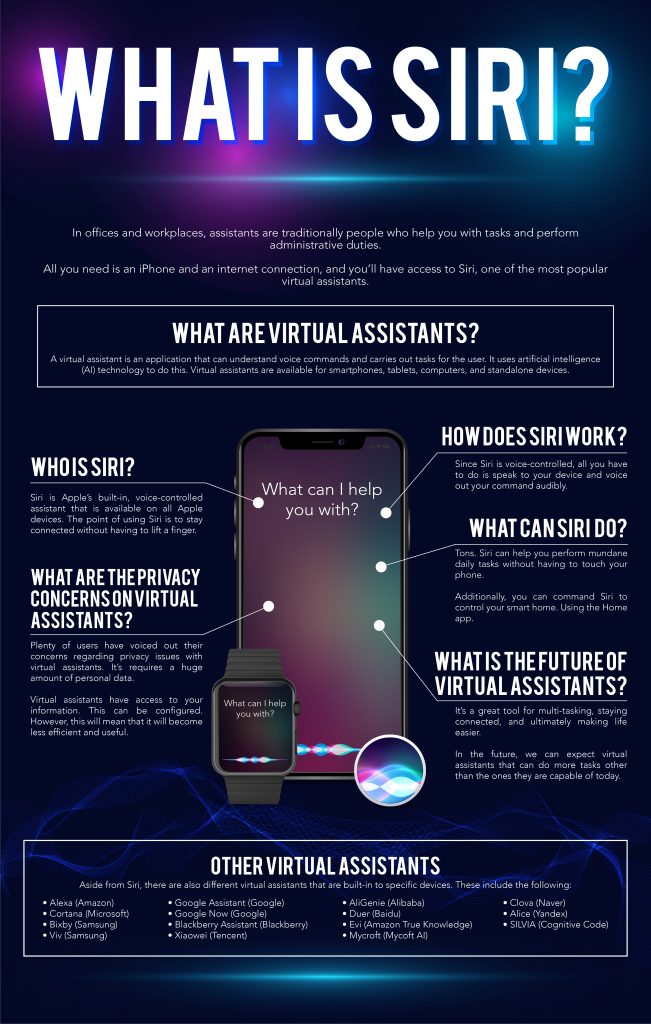