If you’re a regular on Twitter and want more control over your experience on the app, then Twitter’s latest offering might interest you. Twitter Blue is essentially the app’s premium version and gives you access to a handful of exclusive features.

Now interested in knowing what exactly Twitter Blue is? You’ve come to the right place. Read on to learn about the subscription’s exclusive features, how to get it, where it’s available, and if it’s worth signing up for.

Also read: How to Get Verified on Twitter and Get a Blue Badge

Twitter Blue is essentially the premium version of Twitter. For a monthly fee, you’ll gain access to exclusive features, some of which have been long awaited by Twitter users. As of writing, here are all of the features you can get with a Twitter Blue Subscription:

Besides these eight features, subscribers also gain access to experimental features that haven’t been released to the public yet.

We’ll discuss each of the features listed above and how to use them in a later section.

To get Twitter Blue, all you need to do is sign up for a subscription either through your phone or PC.

Twitter Blue is still relatively new, so there are only a handful of features for now. In this section, we discuss those features and how you can access them.

While it isn’t exactly the long-awaited edit tool, the Undo Tweet feature gives you up to 60 seconds to revise a tweet after you’ve posted it. During this time window, your tweet will only appear as a preview and won’t be visible to your followers yet. This feature is on by default.

To use the Undo Tweet feature, do the following:

Twitter Blue also allows you to enable and disable the Undo Tweet feature for certain types of tweets. Here’s how:

You can also adjust the time window for undoing a tweet. Once you’re on the feature settings page for Undo Tweet, tap on the Tweet Undo period. There, you can pick 5, 10, 20, 30 or 60 seconds.

The free version of Twitter already grants you the ability to save tweets by bookmarking them. But with Twitter Blue, you can now organize the tweets you save using Bookmark Folders. You can create as many Bookmark Folders as you want, and these folders are always only visible to you.

To create a new Bookmark Folder on Twitter Blue, do the following:

When you see a tweet on your timeline that you want to save, simply tap on the Share icon underneath the tweet, and hit Add Tweet to Bookmarks. Then, select the Add to Folder button, and pick the folder that will store the bookmarked tweet.

You can also add a tweet you’ve already saved to an existing folder. Here’s how:

To remove a bookmarked tweet from a folder, repeat these steps except for the fifth one. 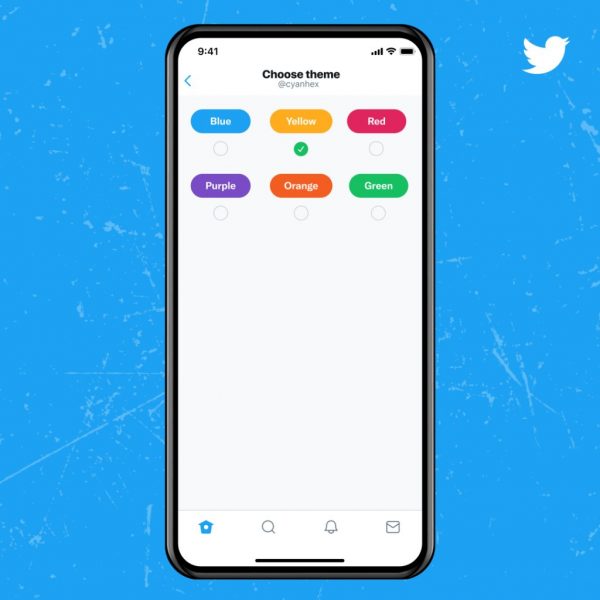 Another premium feature Twitter Blue offers is Themes, which lets you change your Twitter app’s accent color. You can pick between six colors: blue, red, yellow, purple, green, and orange. The feature remains an iOS exclusive as of writing, though.

To change your Twitter theme easily, refer to this quick walkthrough:

Besides being able to choose an app theme color, Twitter Blue also lets you change the look of the app icon on your phone. As of writing, there are eight standard custom app icon options. Apart from those, there are also seasonal icons that you can get for a limited period.

To change your app icon, do these steps:

The next time you open Twitter on your phone, you’ll see your new custom app icon. You can replace it whenever you want via our guide.

Twitter Blue’s Custom Navigation feature lets you choose which Twitter destinations to place in the navigation bar at the bottom of the app. That way, you can easily get to the parts of Twitter that you visit the most.

With Custom Navigation, you can have as many as six items in your navigation bar. You also have the option to have just two, if you want. All the other items are still accessible through the Profile menu. Unfortunately, this feature isn’t available to Android users yet.

To set up the Custom Navigation feature, follow these steps:

Top Articles curates the most-shared articles by those you follow on Twitter. With this feature, you’ll see the top 25 Twitter posts from the people you follow regarding your Top Articles. You can tap on an article from this section to read it. You can also select the profiles underneath the article to view someone else’s feedback about it.

To customize your Top Articles section, head over to your Profile menu. Then, tap on the Filter button, and choose which time frame you want to view your Top Articles. By default, this is set to 24 hours, but you can also see Top Articles from the last one, two, four, or eight hours.

If the app tells you that there aren’t any articles in your network yet, that means you need to follow more accounts.

Twitter Blue also allows you to read ad-free articles published by sites that are part of the Twitter Blue Publishers Network. Some of the sites included in this network are The Atlantic, Business Insider, The Verge, Variety, and Los Angeles Times, among many others. You’ll know you can read an article ad-free when you see the “Ad-free with Twitter Blue” label within the tweet it was shared in. Take note, though, that the subscription’s Ad-free Articles feature doesn’t let you through paywalls.

To read articles without the ads, all you need to do is log in to your Twitter account, either on your phone or your computer. On your timeline, when you see someone share an article that has an “Ad-free with Twitter Blue” label on it, simply tap or click on that article. Then, you’ll be able to read that article ad-free. On your subsequent visits to the same site, you’ll be able to read ad-free articles without needing to spot them on your timeline first. Just make sure that you’re using the same device and the same web browser and that you’re logged in to Twitter while you’re on the site.

Instead of reading a Twitter thread as a series of fragmented tweets, going on Reader mode allows you to read it as if it’s an online article. That way, you get a more seamless and less cluttered reading experience on the app.

Enabling Reader is incredibly simple. All you need to do is follow these steps:

To switch Reader off, tap on the “Exit Reader Mode” button above the navigation bar.

When Twitter Blue was first launched in June 2021, it was only available to iOS users in two countries: Canada and Australia. However, as of writing, it’s also now available in the US and in New Zealand, as well as on Android and the web version of Twitter. As we mentioned, the subscription service is still in its introductory phase, so it will most likely become available in more countries in the months to come.

The monthly subscription fee for Twitter Blue varies depending on the country you’re in, as shown in this table:

Take note, though, that these are just introductory prices and are still subject to change. To check the current subscription fee, go to your Profile menu and select Twitter Blue. You’ll see the current price on the Subscribe button.

Twitter Blue is mostly intended for those whose jobs and lives heavily involve being and posting on Twitter. Included in this group are long-time, verified Twitter users as well as “news lovers,” as Sara Beukport, Twitter’s Product Management Senior Director, puts it. A lot of the features of this new subscription service are designed to give users a more seamless and convenient reading experience. There are Top Articles and Ad-Free Articles which help you view relevant content and read them without ads cluttering the page and making loading time slower. Of course, you also have Reader at your disposal to make Twitter threads easier to read and digest.

How you unsubscribe from Twitter Blue depends on how you signed up for the service in the first place.

If you signed up for the subscription service using an iOS device, you can cancel your subscription by following these steps:

If you signed up through Twitter’s web version, cancel your subscription through these steps:

If you pushed through with stopping your Twitter Blue subscription, know that the features are still useable during the remaining days of the billing period.

Is Going Premium Worth It?

Ultimately, whether or not signing up for a Twitter Blue subscription is worth it depends on what you use the app for. If Twitter is a huge part of your job (or your life), then you might find subscribing to the premium service helpful. For instance, being able to undo a tweet can come in handy, especially if you have a huge Twitter following. Also, Top Articles, Ad-Free Articles, and Reader are all great if you get most of your news on Twitter. Paying 2.99 USD a month is already a pretty good deal considering all of the features you get with the subscription.

That said, the subscription service isn’t for everyone. If you’re only a casual Twitter user and only use it a few times a day, there’s really no point in upgrading to a premium version of Twitter. You’ll still be able to do the basics with the free version: you can tweet, retweet, quote tweet, like, and follow and follow users, among many other functions. Plus, you’ll still be able to see tweets and other posts as before. Twitter has no plans of locking away any content behind a paywall (at least for now).