They say a picture speaks a thousand words, that visuals transcend verbal speech. Indeed, emojis represent emotions that are impossible to express through words. We use them in our daily lives, from texting and tweeting to captioning our next Instagram post. Emoji has become ubiquitous in our everyday lives. Despite its everyday use, every individualŌĆÖs perception of the same emoji can be completely different. This leads to miscommunications and even conflicts between people.

With the challenge of interpreting emoji meanings and the weight of emojis in our lives now, a brand new profession has been born. A professional emoji translator. Yes, the emoji translator is now a real, viable job! Whether you wish to get the enviable job of being an emoji translator, or simply you love playing around with emojis, we have uncovered the best emoji translators for you to start your fun emoji learning journey with.

To help you with your emoji translation journey, we tested six websites to find their advantages and disadvantages. To ensure consistency and accuracy, we used the same phrases across the websites in our tests.

This website replaces some words with emojis while leaving the irreplaceable words untouched. It is the only emoji translator site that has over 100 different languages for you to write your text, which is then translated into emojis for you. 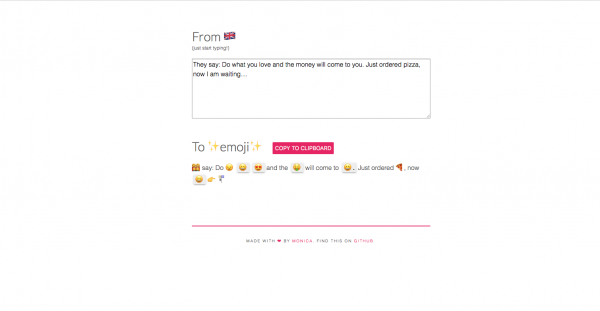 Web developer Monica Dinculescu built this emoji translator as a side project and hosted it on her personal website. It replaces some words directly with emojis and leaves the rest of the message intact. The pink Copy To Clipboard button makes copying of texts easier, though in doing so it messes up the text alignment by lumping the words into one single paragraph.

There is actually a secret in using the Meowni emoji translator. Once you know about it, you will find Meowni a lot more user-friendly and effective. If you click on the Copy To Clipboard button, you will just get the translated phrase as per usual. But if you copy and paste the text using your mouse or keyboard, you will be able to get a range of alternative emojis from which you can choose the one with the closest meaning to your word. Besides having multiple emojis to play with, you get to keep your word arrangement as well. Hence, copying and pasting manually is definitely the preferable option.

LingoJam is a website that allows you to create your own translator for any language or code you can think of. And one of them is the emoji translator. Unlike most sites, where the generated emojis remain constant, you can see different emojis each time you type in the same text. But it can get quite frustrating when you have to keep inserting the same text just to form a different emoji for the same word.

This website is a simple, no-frills emoji translator that directly replaces some of the words with emojis and leaves the rest of the text alone. Once you click on the blue LetŌĆÖs Get Started button, you will be led to the translator to input your message for translation. While it may be lacking in functions, it does have the most accurate emoji translation amongst all the translators. 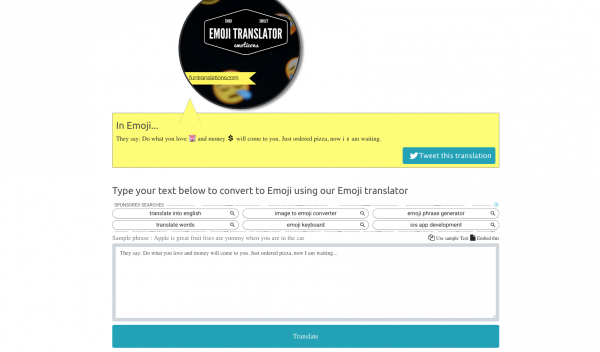 This is a website that does not only emoji translations but also many fun quirky translations for over 50 languages like Yoda speak and Minion speak. You have to write your text in the empty field and click on the blue Translate button below to translate. This emoji translator inserts the emojis adjacent to the words instead of replacing the words with the emojis so you can still make sense of the sentence.

Emojis are most often used in cell phones, and there are millions of mobile apps nowadays. So naturally, emoji translator apps can be found as well. However, they serve a slightly different purpose from emoji translator websites. As emojis are a part of our phone features, these apps have made use of the emoji translators for more creative uses. 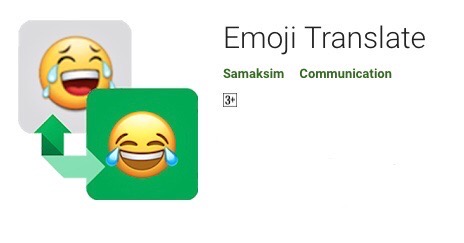 This is an app that shows you how an emoji looks like on other software. All you have to do is to select the type of device of the person who sent you the message and copy the message they sent you. This will transform your emoji’s appearance to look like how it would appear on their phones.

Emoji Translator! (iPhone and iPad only)

This app uses emojis creatively to form entire words using only emojis. While it takes a bit of time to decipher the words, it can be a great source of alternative entertainment when you get bored with your mobile games.

Have you ever wondered how an entire webpage would look like with emojis added in? Wonder no more with the Emoji Translate extension on Chrome, yet another emoji translator created by web developer Monica Dinculescu. This time, she takes it up a notch by making the translator translate entire webpages.

Now how do you use the emoji translator extension? Firstly, you need to open a Chrome browser and then search for ŌĆ£emoji translate extension.ŌĆØ Click on the very first result, ŌĆ£Emoji Translate – Google ChromeŌĆØ to enter the Chrome web store. Click on the Add to Chrome button to install the extension.

You can easily spot the installed extension as a smiling cat with a heart-shaped eyes icon ­¤ś╗ on the top right hand of your browser next to the URL link. Simply click on the cat emoji to dress up your text-heavy page with some fun emojis! Note that you canŌĆÖt switch back by clicking on the emoji again. You will have to reload the page to return to the original text.

Why Is It Crucial to Understand Emoji Meanings?

Emoji use is on the rise, particularly with our global situation now that has led to the start of the work-from-home era. As more people work remotely and communicate more frequently with their smartphones, people start relying more on emojis to enhance expression when text messages alone are insufficient. If you use emojis effectively, you can add nuance to a conversation, which might further endear you to a friend or even your boss! This is why emojis have rapidly become our lingua franca.

Emojis may have been originally created as a form of a universal language for anyone to understand easily. Yet unexpectedly, differences in cultures actually lead to very different interpretations of the same emoji. For instance, ­¤æŹ ŌĆö this emoji generally represents a sign of approval in the western world. However, it is traditionally seen as an offensive gesture in Greece and the Middle East. And sometimes, depending on the context, people might use an emoji to mean something totally different from its original intention, such as the use of the peach emoji ­¤Źæ to indicate an attractive posterior.

To add to the confusion, emojis are not created the same across smartphone platforms and operating systems. Miscommunication can easily crop up as a result of these slight differences used by illustrators to reflect their brand images. As The Good Place actress Jameela Jamil had found out the hard way this April, emoji miscommunication can pose quite dire consequences. She had posted a tweet on her iPhone with what had appeared to her as a ŌĆ£shocked face.ŌĆØ Unfortunately for her, Twitter followers using the web saw the ŌĆ£shocked faceŌĆØ as a ŌĆ£giggle.ŌĆØ They then proceeded to assume that she was mocking the people in the tweet she shared. It was only after this severe backlash that she learned the same emoji can look very different in another platform.

Therefore, even if you treat emoji translators as a form of casual play, you have to be very mindful of the emojis generated so that you do not get into any embarrassing social blunder or even sow discord with others.

With over 3,000 emojis and their numbers ever-growing, you might shudder just thinking about the actual meaning of each emoji. Thankfully, there are resources that you can refer to for their meanings and even compare them across various mediums. For a quick reference, you can always check out our Emoji Dictionary, but for a more comprehensive guide, we have discovered the following sites for you.

Emojiguide is a website that explains emoji meanings and allows you to copy and paste emojis. Besides the typical categories, it also includes a platform section whereby you can see each platform’s emojis and a Unicode version of all the emojis.

Emojis.wiki is an emoji glossary website that offers a variety of emoji combinations for you to create whimsical emoji phrases. Aside from the usual divisions of food and activities, it also has two additional sections ŌĆö┬Āa thematic emoji collection consisting of thematic emojis like birthday emojis, and a holiday emoji collection.

Emojipedia is also an emoji reference website from which you can search for emoji meanings and copy and paste emojis. It encompasses categories such as platforms, Unicode versions, and even emoji versions of old and new emojis.

When you understand emoji meanings better, you might be able to make better use of the emoji translators to create even more innovative emoji-laden texts to wow people! And now that you know better about the meanings of emojis and translating the text into emojis, why not try your hand at creating your very own emoji?

KakaoTalk App Review: Talk and Chat With Your Friends Today!

What is Bixby and How to Use It on Samsung Phones?

Sweatcoin App Review: How to Earn by Staying Active

What Is an Unlocked Phone: Everything You Need to Know